How Did This Convicted Stalker From Philly Get White House Press Credentials? 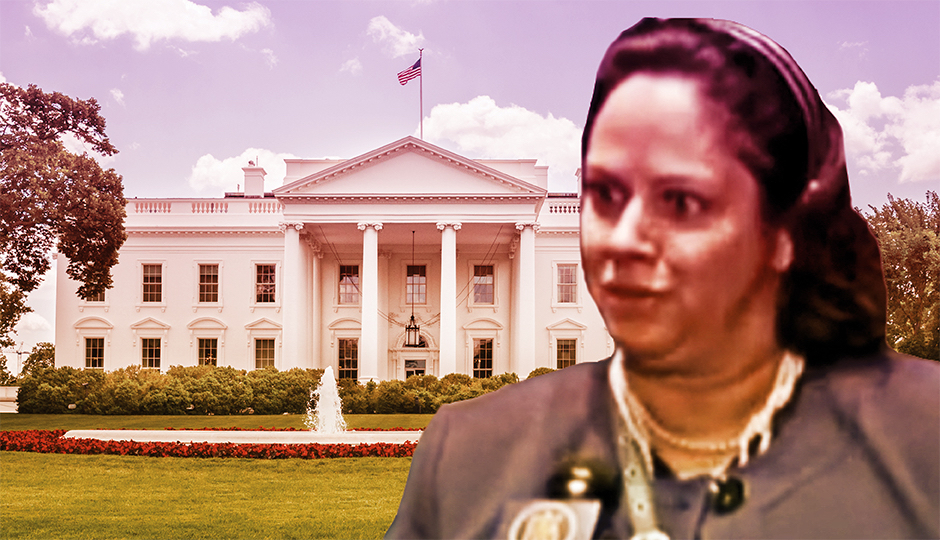 There has been a lot of talk about Donald Trump’s relationship with the press, especially the exclusion of certain media outlets and journalists from White House press events. But apparently it’s not that hard to get into the White House. Case in point: convicted stalker and former federal fugitive Laura Goldman.

Earlier this week, you may have heard that Philadelphia-based coffee mogul Todd Carmichael sent the White House press pool some La Colombe coffee to go with the espresso machine that Tom Hanks had sent the journalists at the beginning of March. A novel public relations stunt by a local entrepreneur. Great.

But what had us most interested was one of the photos used in that story: a Twitter image of the Hanks espresso machine taken on Monday by none other than Goldman, a Rittenhouse Square resident. (Goldman deleted the photo after she found out that we were writing about her.)

What the heck is Laura Goldman doing at the White House? some of us wondered. Really, we’d wonder that of any local journalist-type who winds up at the White House. But in Goldman’s case, things are just a little bit more complicated.

The last we remembered reading anything of hers, it was back in the days when she had a blog called Naked Philadelphian, in which she had some amusing run-ins with Ed Rendell and Sarah Madson, wife of former Phillies player Ryan Madson. But Goldman hasn’t posted there in a few years.

According to her online bio, Goldman is a freelancer, working with the Huffington Post, the Daily Mail, and Good Morning America. Philly Mag reporter Claire Sasko reached out to Goldman to find out why she was hanging out at the White House. “I am part of the WH press pool,” Goldman wrote in reply, later declining to identify which outlet she was working for other than to say it is a “national publication.”

Whomever she’s working for, Goldman has really been getting around. A quick look at her social media presence yields recent photos of her with people like Crossfire alum Bill Press, political commentator James Carville, and MSNBC’s Chris Matthews, plus pictures of her on the White House lawn and in the White House briefing room.

Well, we can only imagine that Goldman’s history is more colorful than most of her new colleagues’.

Before she became a journalist, she was a stockbroker with a Wharton degree. Goldman worked at Merrill Lynch and PaineWebber, and in 1994 she filed a legal claim against the latter. According to the Boston Herald, Goldman’s complaint against PaineWebber alleged that executives there “came on to her constantly and … accused her of sleeping with clients to drum up business.” (The Pennsylvania Human Relations Commission reportedly dismissed her complaint in 1995.)

In 1993, however, while she was working at PaineWebber and before she filed her claim against the firm, she did have some degree of a sexual relationship with married financier Thomas Lee, a PaineWebber client who would go on to orchestrate the $1.7 billion sale of Snapple and make it onto Forbes‘s list of the richest Americans. (He’s currently #335, with a net worth of $2.2 billion.)

Lee would come to regret his fling with Goldman, which took place in Palm Beach. As federal prosecutors would later allege, “Goldman engaged in a lengthy campaign of harassment, threats, and extortion against [Lee] and members of his family from 1994 until … 2002.”

In 1994, several months after Lee declined to continue seeing Goldman, she allegedly began stalking and harassing him, making hundreds of phone calls to Lee and others. She accused Lee of raping her and allegedly attempted to extort money from him in exchange for keeping quiet. (Lee was never charged with a crime.)

In 1995, Lee paid Goldman $200,000 after she signed an affidavit attesting that she had not been raped. But then, said prosecutors, Goldman tried to get more money out of Lee, and he got the feds involved.

Goldman was arrested. After posting $10,000 bail, she was told to stay away from Lee, and the judge also ordered her to stay away from another man: Manhattan psychiatrist Peter Kaplan, the stepson of Toys ‘R’ Us founder Charles Lazarus. According to the Boston Globe, Goldman had had a romantic relationship with Kaplan as well, although the judge’s exact reasoning for the order was never revealed.

Eventually, Goldman entered a plea deal: Federal prosecutors dropped felony extortion charges against her, and she pleaded guilty to a single misdemeanor count of interstate telephone harassment. At the age of 37, she was sentenced to five years of probation. (Around the same time, Goldman was charged by a court in Beaver County, Pennsylvania, with harassing a different man — a former employer — and she later pleaded guilty to that charge, according to court documents.)

She could have served her probation and been done with the federal case. But that’s not what happened.

While she was on probation, prosecutors alleged, she threatened to kill Lee and his children, and also made threats against her probation officer. After she was arrested for these threats, Goldman threatened to kill a judge, according to court documents.

Goldman was given another sentence of probation. Another chance to shape up. But she didn’t. Her probation was revoked due to “abusive conduct” toward members of the probation department and others. The judge sent her to federal prison for four months. She was released in January 1999.

But even that wasn’t the end of it.

In 2000, according to allegations prosecutors presented to the court, Goldman called one of Lee’s attorneys and demanded somewhere between $9 million and $10 million in “war reparations.” The attorney told her no, and Goldman went back to making threats. Unfortunately for Goldman, the feds were listening. Goldman was caught on tape once again making threats against Lee’s children.

“Oh, I know everywhere they go,” prosecutors claimed Goldman responded when Lee’s attorney asked if she was keeping track of Lee’s kids. “That’s my target … I don’t think you realize how serious I am about it.”

Less than a month after that phone call was recorded, an arrest warrant was issued for Goldman. She fled to France, and soon after to Israel. The FBI labeled her a fugitive.

While she was in Israel, Goldman continued her harassment, and she again tried to extort money from Lee.

Eventually, the United States managed to extradite Goldman from Israel. In 2009, at the age of 51, she pleaded guilty to two counts of attempted extortion. Later that year, she was sentenced to five years of probation and told to stay away from Lee and his family. She wasn’t even allowed to enter the counties in which Lee lived and worked.

In 2012, Goldman attempted to have the conditions of her probation changed so that she could travel more freely. The Department of Justice wouldn’t hear of it.

“The travel restrictions in this case have the twofold benefit of freeing the primary victim and his family from worrying about whether the defendant will recommence her harassment of them, and keeping the defendant from locations where she might be tempted to engage in such conduct again,” wrote the United States attorney for Massachusetts in opposition to Goldman’s request. “[T]he protection of the victim and his family should be paramount.”

Meanwhile, Goldman declined to “engage” with Philly Mag for this story but promised that her work at the White House would make itself apparent in coming days. “I am very excited about this project,” she wrote.