The Locust Medical Center was covered in ice after an early Monday morning fire. Now, it's become an unlikely destination for curious Philadelphians. “You ain’t ever gonna see anything like this again!” The man’s walking down the street with a spring in his step. He’s almost skipping. He’s excited. Everyone at the corner of 52nd and Locust is kind of excited. Everyone’s pulling out their cell phones — iPhones, Android phones, even one dude with an old flip phone — to snap a picture. Others have serious cameras out. It’s a mix of classes and races and ages, and everyone’s chatting and pointing out features on the building that I’ll call the Icehouse.

The Icehouse is Philadelphia’s unexpected brief tourist attraction this winter. Notably, it’s a spot for local tourists. Several of my friends have been out to West Philadelphia just to see this place and snap a few photos of it. Based on how many people showed up during the half-hour or so I was there — more than 50 — the Icehouse may have been photographed almost as much as the Liberty Bell these past few days.

Before Monday morning, the building at 52nd and Locust that later became the Icehouse was  just the Locust Medical Center. According to signs on the outside, the building housed a drug store, a family medicine practice, a foot specialist and a dentist. A fire broke out sometime before 4 a.m.; firefighters quickly struck a second alarm. The fire was under control by 6:30 a.m. and no one was hurt, but the building was soon covered in ice. Not long after it was deemed in danger of collapse. L&I plans to demolish it shortly, and as of yesterday was searching for contractors for the demolition.

But for now, it’s still the Icehouse — and it’s become quite the hot spot. Not that 52nd Street isn’t a bustling strip in West Philadelphia always, but it was bumping for a 20-degree day in late February. The corner across from the Bushfire Theater has become 52nd Street’s main attraction. (It’s too bad it’s big, or enterprising Philadelphians could charge people to take photos like people in East New York did with that Banksy piece last year.)

People today didn’t have much to say to each other except to share their incredulousness that this was an actual thing on a Philadelphia street corner. I asked the man at the convenience store counter if business was up. He shrugged. “You’re here,” he said as I bought a drink (a creme Day’s Soda). A man named Rasual who didn’t give his last name told me he lives nearby and was outside during the fire. “It was the most insane thing I ever saw,” he said.

I figured the place might be drawing crowds when I saw the photos. When I was in fourth grade, a fire gutted the house four doors down. The next day at school, they warned us over the loudspeaker to not go near that house on our way home, as it could be dangerous. As such, hundreds of children packed Brookview Road at 3 p.m. to gawk at the charred husk of the house. A bunch of people got on the news.

When I saw people who live in Fishtown — Fishtown! — traveling to West Philadelphia to check out the Icehouse, I knew it was a similar phenomenon. A report on Fox 29 yesterday even found a man filming the Icehouse with a drone. That man, Dave Cocchi, later posted some incredible drone shots to Facebook.

Today, people ran and walked around the intersection taking photos. 52nd Street, closed after the fire, had been reopened. In that half hour, I counted 10 cars stopping to snap photos — some didn’t even get out of the car. People snapped photos and compared shots — the bright sun made it particularly tough to get clean shot from certain angles. But everyone there tried. People wanted to get a photo as if to prove to themselves that this weird thing actually happened.

Summer has pop-up beer gardens. Winter has this pop-up Icehouse. There’s probably no larger meaning to come out of this. But it’s fun to see Philadelphians — residents of the area, passersby stopping their cars, hipsters who made a special trip to go see the place — chatting it up in 20 degree weather just because of a weird fire. This fire was an awful event for the businesses there and the neighbors near 52nd and Locust. But at least Philadelphians have turned it into the Icehouse, a temporary tourist attraction on 52nd Street.

The Icehouse, 52nd and Locust 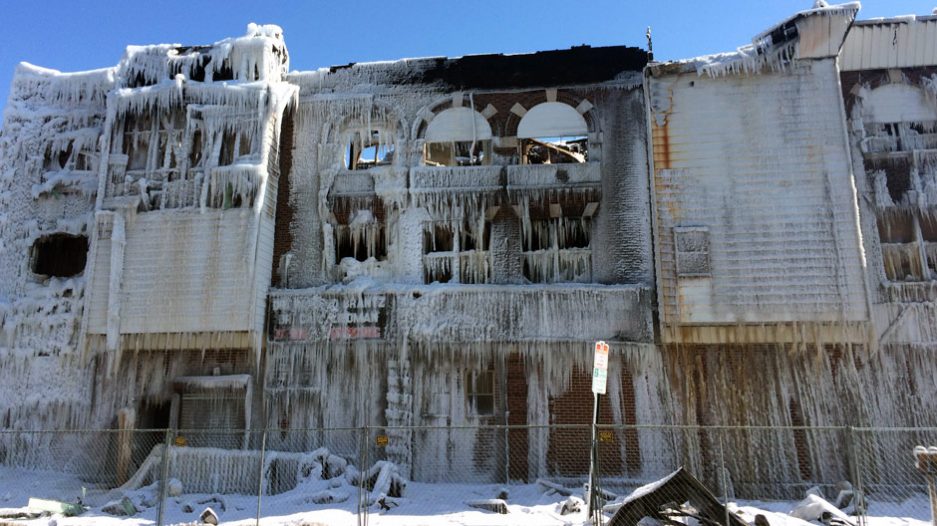 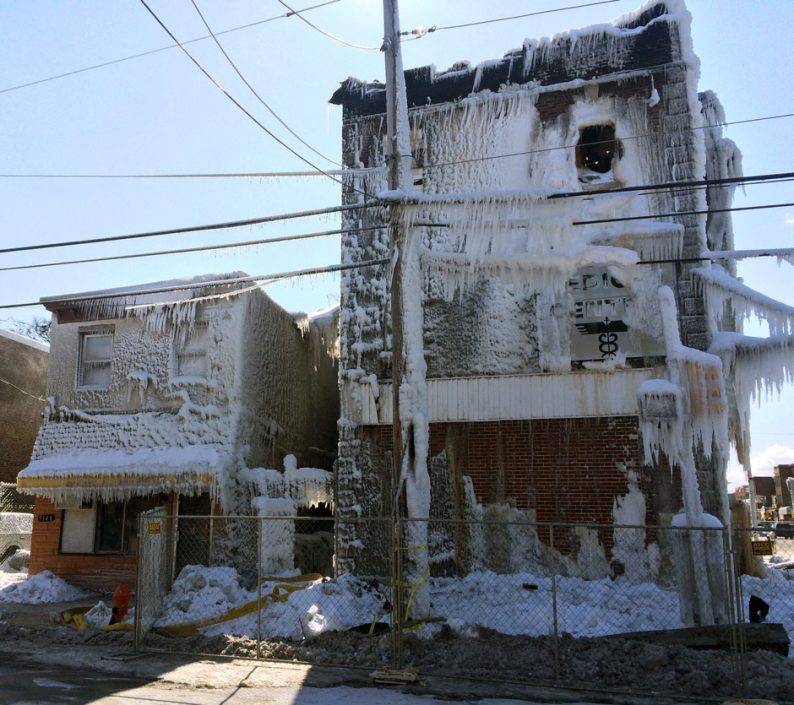 The Icehouse, side view 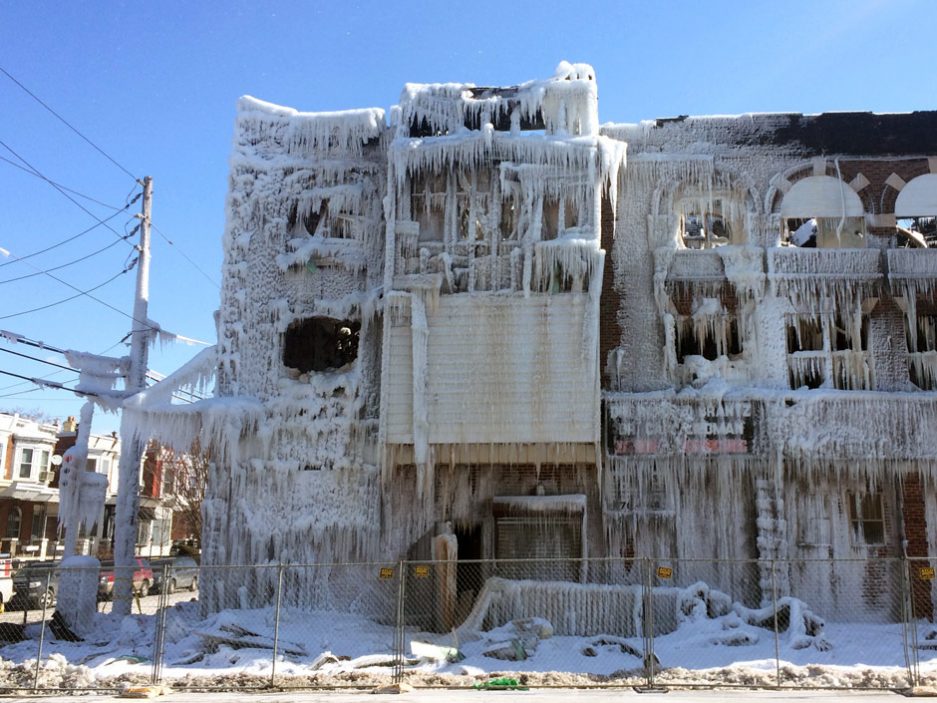 Another view of the Icehouse front 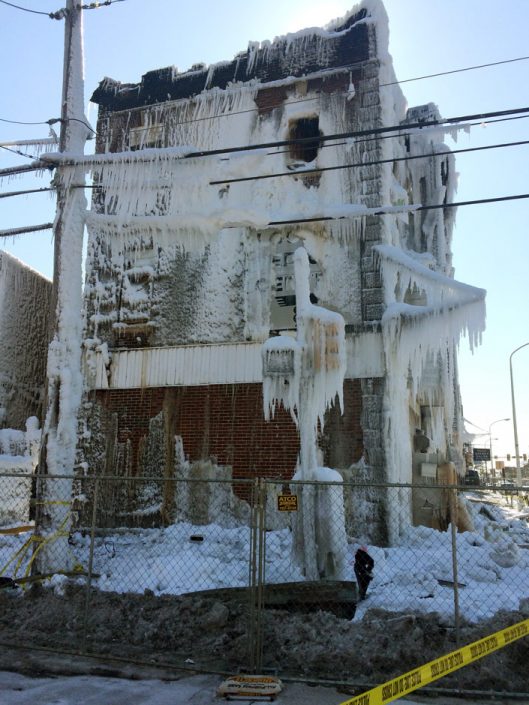 A closer view of the side of the Icehouse 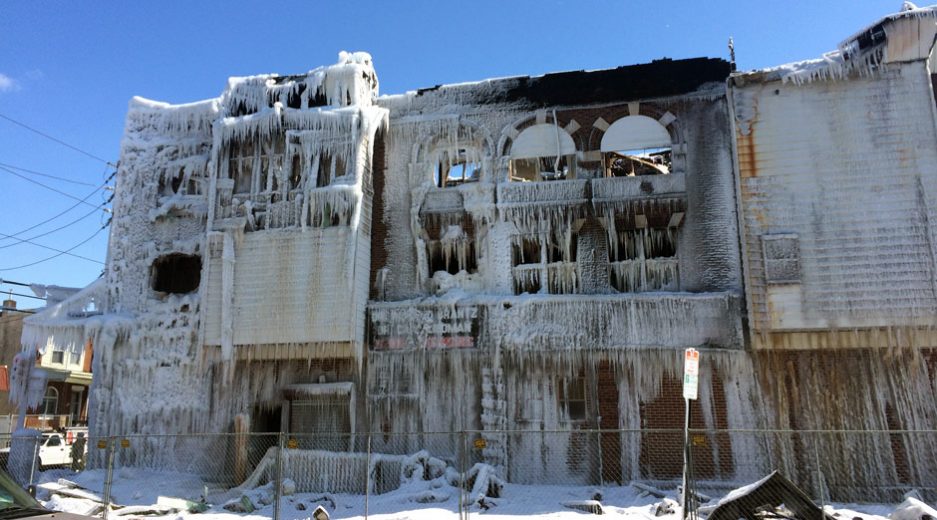 A final front view of the Icehouse