How M. Night Shyamalan’s Servant Ended Up a Major Donor to CHOP Research

When the show approached Rittenhouse residents Jay and Stacey Storm about filming in their rowhouse, the homeowners had one condition: donate the location fee to CHOP. 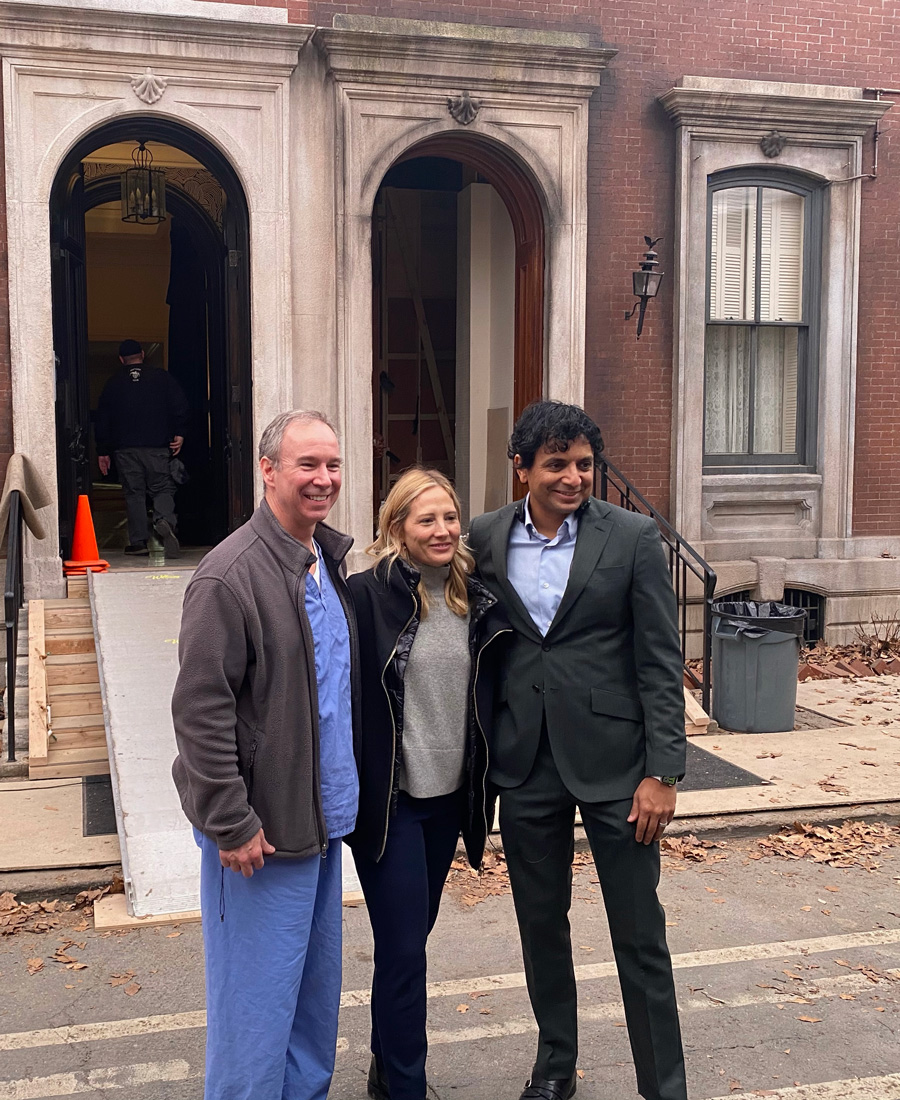 It’s an April day on a block full of century-old row homes in Rittenhouse. Inside one, hit psychological horror show Servant, created by Tony Basgallop and produced by M. Night Shyamalan, will soon be filming its third season. The Apple TV+ show is eerie and dark, with the plot centering around a wealthy Philadelphia couple who lose a child and then, in their grief, begin to unravel.

The home the show is filmed in belongs to another young Philadelphia couple, Jay and Stacey Storm, with their own children at home. Stacey, an architect, had redesigned the 1850 house from top to bottom, so the couple was flattered when the show’s producers showed initial interest in using their home as a film location — but actually signing on was another story.

For their house to be featured in the filming, the show’s crew would have to repaint and redesign the home Stacey had just painstakingly finished, the family would lose some privacy, and they wouldn’t have any access to areas of the house for long stretches of time. To compensate for the adjustment to their living situation, Jay explains, the Storms were offered a location fee just south of $100,000 per year for the use of their home. (Site fees are a typical part of the production process, and the amount depends on the location, the disruption the filming will cause to the property owners, as well as the duration of filming.)

The Storms weren’t sure if they wanted to move forward, but they had an idea about how they could make it all feel worthwhile. Jay, the chief of neurosurgery at CHOP, was trying to innovate in the field of pediatric brain tumor research.

“We didn’t need the money for ourselves,” says Stacey. “But it seemed like an opportunity for the center that could be really special. We realized it would be disruptive to our lives, but that the upside for the research and the lab would greatly outweigh that.”

The couple agreed to go along with the film plan if the show would donate the fee to Jay’s research initiative, the Center for Data Driven Discovery in Biomedicine (D3B) at CHOP, with the goal of expanding their existing programs and raising the center’s profile through the unique partnership with the show. 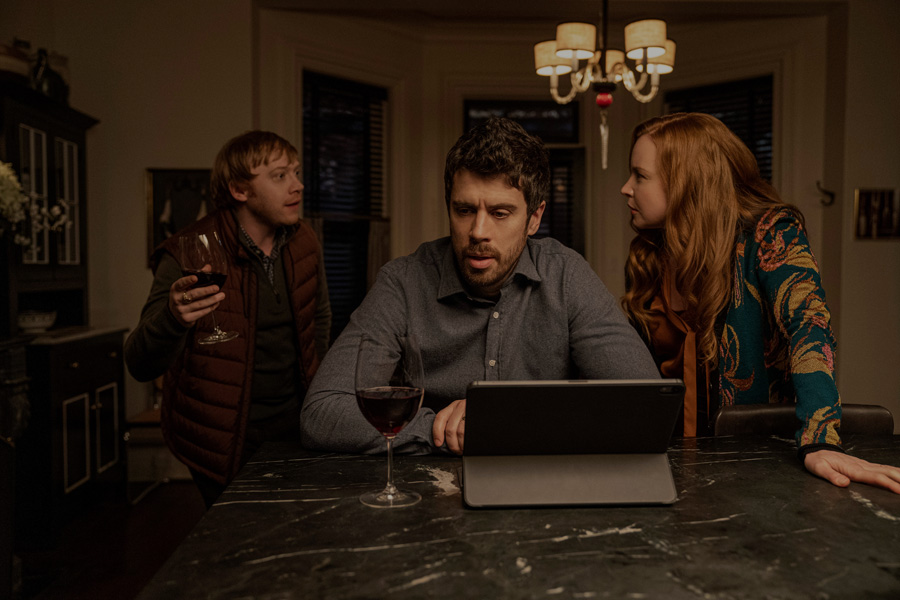 “We had a meeting at their home to talk through the details,” says Servant location manager Staci Hagenbaugh. “These meetings are pretty standard — you go through the terms, the duration, the compensation. But they asked me if our production would be open to doing something a little different. They told me about D3B and asked if their compensation could be donated directly to the center. I think I probably stared at them in silence for a minute or two. Then I teared up. In my 15-plus years as a location manager, I have never had anyone ask to do something like this before.”

Shyamalan and the production team of course acquiesced, and in this way a singular partnership between the show and D3B was born.

“For me personally, this partnership has been a career highlight,” says Hagenbaugh, who works closely with the family and has since, with the rest of Shyamalan’s crew, offered to help the center with free filming of promotional videos to raise awareness of their efforts.

The D3B Center, founded by Jay and neuroscientist Adam Resnick in 2016, works to develop cures and therapeutics for children diagnosed with cancer and other chronic and terminal diseases. This year is the third season running that Servant has been a major supporter of that research. Each year, Servant has made a donation on top of the agreed-upon location fee to D3B.

“As a Philadelphia filmmaker, community support in Philadelphia is an essential part of my storytelling process,” Shyamalan said in an email for this story. “Jay and Stacey have been advocates of our show since the beginning. Showing them the same support by contributing to the D3B was an easy decision for me. The strides they have made, and continue to make, for pediatric cancer are monumental. We feel very fortunate to work with them.” 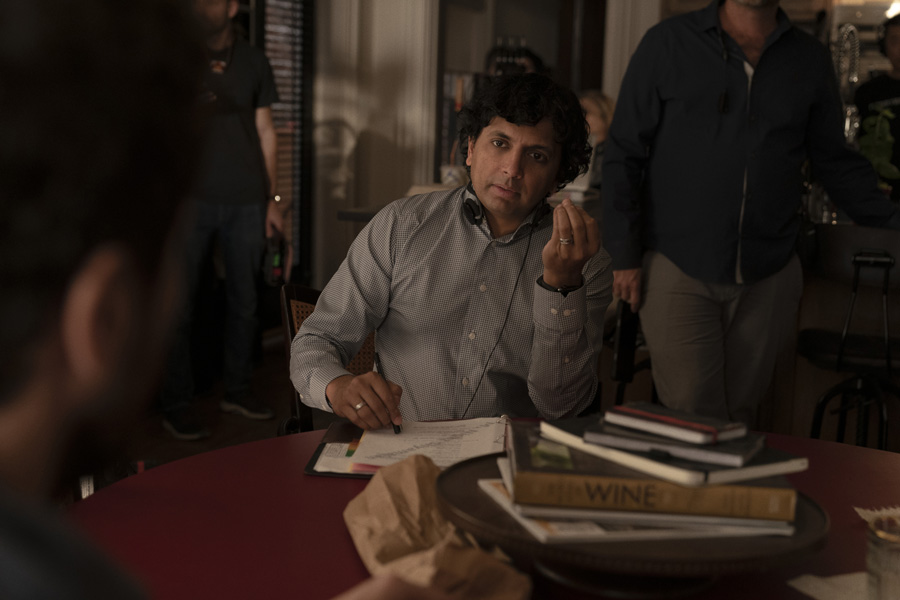 Jay says that while the center is mostly funded by an NIH grant and other research dollars, real innovation relies heavily on philanthropy. With donated dollars, the center can try to “swing for the fences,” as Jay puts it, and try ambitious research initiatives.

“When the show came along, it was great timing. We had all of these amazing researchers within Philadelphia,” says Jay. “We said let’s partner and let’s make Philadelphia the place that’s going to really make a difference and maybe even cure some of these tumors.”

With the show’s support, they’ve expanded their local initiative, The Philadelphia Coalition for a Cure (PC4C) — a regional collaboration utilizing the latest technologies and research to help find answers for patients diagnosed with multiple types of brain tumors, COVID-related strokes and other vascular diseases. The PC4C is a first-of-its-kind collaboration between CHOP, Temple, Penn, Jefferson, Cooper, and Crozer. The goal is to create an open-source network of data and MRI imaging that will allow hospitals to analyze the shared information to improve therapeutics and search for cures, ideally making it possible to diagnose tumors without surgery.

“The D3B center exists to create as much data and knowledge to lead to change for patients all over the world, not just CHOP, not just Philadelphia, not just children. It’s really to amass as much open-source data and turn it into knowledge everyone can use, and turn that into impact so that we can improve care,” says Jay.

“Look at what we’ve done with COVID this year,” he says. “The data was released immediately. Between all the information and all of the open-access and all of the sharing, we have a vaccine in a year. Why aren’t we doing that with cancer? Don’t tell me it can’t be done.”

For Jay, the partnership between the center, which is seeking to save kids’ lives, and the show, filmed locally and centered on parents mourning the loss of a child, feels significant.

“It’s surprising how it came together,” he says. “It’s been a perfect storm of timing. It’s putting Philly in a show that’s seen worldwide; it’s mostly Philly people being employed on the crew and on set; and every penny of that location fee goes to help children with brain tumors. Plus the characters are Philadelphia parents who are going through the loss of a child. I mean, what wouldn’t you do to bring back your child or to make them better, just to ease their suffering for a day? You couldn’t make this up. It’d be the perfect script to write — all of these things coming together in Philadelphia and being supported by a Philly-based show.”

The Center for Data Driven Discovery in Biomedicine (D3B) brings together leading clinical care professionals, data scientists, bioinformaticians and other researchers to discover cures and better therapeutics for children diagnosed with cancer and other diseases. To learn more, visit their website.