NextUp: How a Narberth Dentist’s Invention Is Making Dentistry Safer Amid the Pandemic

MB Dental Solutions has created a tool that enables dentists to perform routine care while protecting patients from potential exposure to COVID-19. 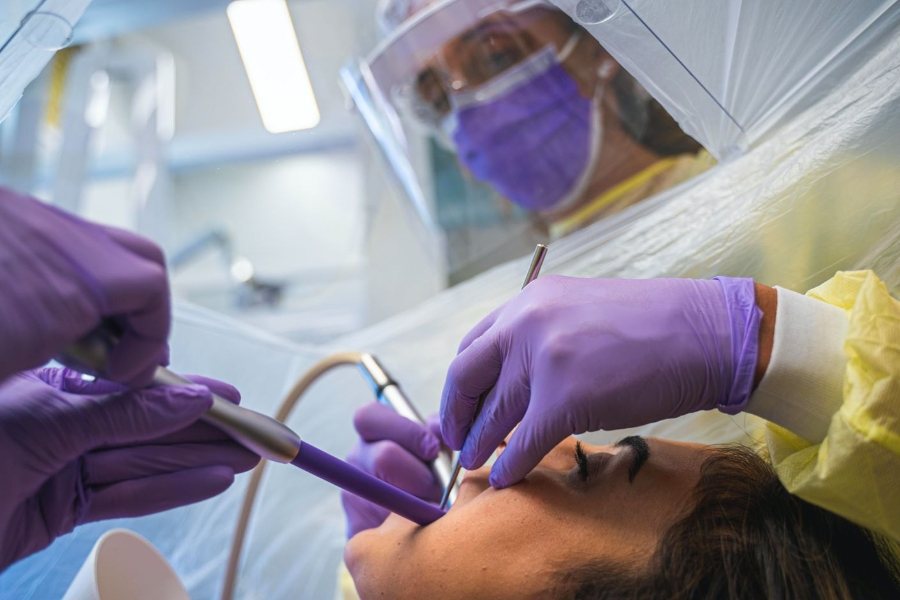 MB Dental Solutions has invented PatientsShield, which enables dentists to perform routine care while keeping themselves, their staff and patients safe from the potential spread of COVID-19. / Courtesy

Who: Mindy Benjamini spent the month of March worried that her career as a dentist was essentially over.

“When COVID really started coming on the news in early March, I was terrified,” Benjamini said. “I thought to myself, ‘I’m never going to be able to work as a dentist again.’”

Non-emergency medical procedures had been suspended in the state and dentists, who would undoubtedly put their patients at risk of exposure to COVID with each open-mouthed, droplet spray and splatter-laden procedure, struggled to find safe ways to continue delivering dental care.

Benjamini’s fears were exasperated when, amid a personal protective equipment (PPE) shortage, government officials confiscated the few PPE supplies she had left and redistributed them to hospitals where, at the time, doctors serving COVID-19 positive patients needed them most. Forced to limit her practice to emergency procedures only, Benjamini began brainstorming how she could fully re-open her Narberth-based practice safely for routine dental procedures.

“This is my profession. I love being a dentist. So, I knew I needed to figure out some way to keep doing what I love to do,” she said.

Benjamini began developing a tool that could prevent droplets and spray from spreading throughout a dental office during procedures. After months of tinkering with prototypes made of everything from wood, nails and screws to 3D printed materials, she arrived at a design she felt was strong enough to manufacture, and her company, MB Dental Solutions was born.

What: Keeping patients safe during dental procedures was a challenge even before COVID-19 arrived. Dental instruments routinely create hazardous airborne particles containing bacteria from saliva, blood, and fluids from under the gumline that can remain suspended in the air for up to six hours. Other contaminants are released during the removal of fillings and the drilling of crowns, bridges, and prosthetics.

PatientsShield is a patent-pending dentistry tool made up of a flexible polycarbonate shield, thin polyethylene sheets and a suction funnel. When assembled, the system allows dentists to see their patients through the ultra-clear plastic shield while the lightweight sheets prevent spray and splatter from entering the air and the suction funnel removes it from the room. According to Benjamini, the shield captures 99 percent of splatter, droplets, and aerosol spray by effectively removing it before it enters the ambient air. She believes the product could be the key to administering dental care safely amid the pandemic.

“You can have aerosol lingering in the air for hours after a dental appointment. So, if I have my N95 mask, I’m probably safe, but the poor patient has to take their mask off and when they’re getting worked on, it creates a lot of splatter that, if it’s not contained or removed, it’s going all over the whole office,” she said.

“But because it’s contained by the sheets and then you place the high-speed suction under the shield, it removes a lot of the water spray. So, if there’s a lot of vapor, you can actually see it pulling it through the cone to the funnel.”

Like other systems, Benjamini recommends dentists continue using antibacterial and CaviCide wipes to clean all chairs and countertops in the space. The shield itself, and any other hard surface component of the system, including clamps, should be wiped with alcohol, then CaviCide after each use. The disposable polyethylene sheets are to be removed, discarded, and replaced after each patient. The funnel hose goes into the autoclave to be sterilized after each procedure.

“It takes a little extra time, five to ten minutes, to clean up between patients, but it’s worth it,” Benjamini said.

When: In May 2020, Benjamini began testing out the shield, first on family members, then on her patients, who all responded with good reviews about how safe the shield made them feel. So far, 25 dental practices across the country have adopted PatientsShield; half of them purchased the product, the other half received the product on a courtesy trial basis.

“Hopefully, down the road, it could maybe be a standard of care for everybody because I see the schmutz that filters through the PatientsShield, and if that’s going around dental offices throughout the city, that’s pretty bad,” Benjamini said.

What it means: PatientsShield is not the only tool dentists are using to ensure patient safety during dental procedures, but many of these options are costly. Some dental practices have adopted advanced air purification systems or UV light disinfectant products that can cost anywhere from $1,200 to more than $2,000. Others have invested in the new construction of negative pressure rooms, an option that was priced in the $40,000 to $50,000 range even back in the 80s. The PatientsShield package costs just under $500.

“Many dentists are doing the right things to protect their patients,” Benjamini said. “But this is an actual physical thing that makes patients feel safe because it’s not invisible to them. They see that we are containing it. There’s nothing flying through the air and by the time they leave, everything that was flying from their mouth is now cleaned up disposed of, and the place is clean. So, it’s a real visual plus for the patients.”

If major hospitals and academic medical centers decide to adopt the device, it could become the standard for post-pandemic dental care.

Why it matters now: As of August, both the Centers for Disease Control (CDC) and the World Health Organization have recommended against having dentists perform routine dental care during the pandemic. Instead, the WHO’s guidance encourages telehealth visits and self-care. The American Dental Association released a statement in response to the WHO’s guidance, arguing that routine dental care is just as important as any other type of healthcare and should be allowed to continue so long as dentists take the proper safety precautions. Benjamini agrees.

“I think we just need to make more guidelines to make dentistry safer. There is no need to skip out on dentistry. It’s not like getting your nails done. Dentistry is a real health issue for so many people. And I think, instead of saying ‘don’t go’ we should be thinking ‘how can we go safely?’” she said.

“I think PatientsShield is an answer that my patients have appreciated and I’m glad I made it.”