You need fuel for the game. We have recommendations. 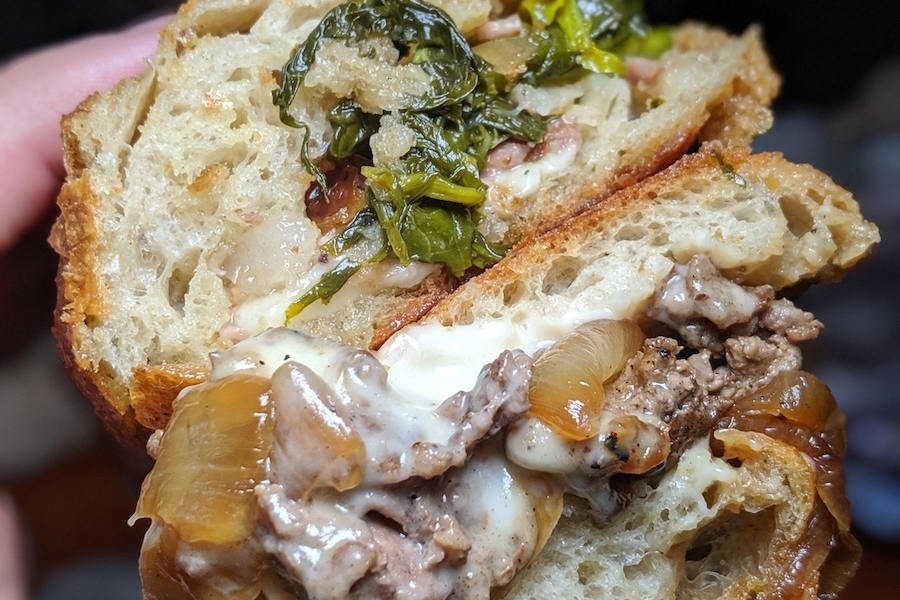 Tailgating is all about the food, right? Well, if you’re reading this, it is for you. And while some people might be bringing trays of homemade foods, we prefer to celebrate the best that Philadelphia’s restaurants have to offer while we get riled up for the Birds. You’re going to need fuel, so it better be delicious. Here’s what we would bring if you happened to invite us to your next tailgate.

A giant hoagie from Middle Child
Place your order at least 48 hours in advance to get your hands on a three or six-foot long hoagie of your choice from Middle Child. Just make sure you have a very long table to set it up on for the perfect IG shot.

Many pastelillo’s from Amy’s Pastelillo’s
Tailgating foods get points for being handheld, and Amy’s Pastelillo’s are perfectly fried packages of goodness, easy to eat with one hand while holding a beer with the other. They come in a variety of flavors, but the guava pork barbecue is the move.

A porchetta platter from Porco’s
You could show up with a bunch of pre-made porchetta sandwiches, but then you wouldn’t get the glorious moment of presenting an entire five-pound roll of meat to your fellow tailgaters. Bring a large knife. You’ll need it.

An large order of wings (or two) from Chimcking
Chimcking is a Korean chain that has landed in the U.S., specializing in fried chicken that stay crispy and juicy for a very long time, which is important here because there’s nothing lamer than showing up with a box of soggy, sad chicken. They also happen to have a pretty good selection of six packs, so you can pick up some beer on your way to the tailgate.

A Fiesta Kit from Mission Taqueria
The name kind of says it all, right? The fiesta kit comes with fixings for about 16 tacos (you pick the meats!) plus guacamole, all the salsas, rice and beans, sweet plantains and hot sauce. Bring your own margaritas or Modelo to complete the spread.

A hoagie catering tray from Mi Pals Deli
There’s nothing simpler or more appropriate for an Eagles tailgate than a hoagie, and we love the hoagies from Mi Pals. Opt for a catering tray to make sure you have enough, and don’t forget to ask for the extra sharp provolone.

A whole pizzaz from Cacia’s Bakery
The pizzaz at Cacia’s is kind of legendary in South Philly, so it’s an appropriate choice for a tailgate. It’s a thick-crust white pizza topped with American cheese, mild banana peppers and slices of tomato, but at it’s core is so much more. Plus, a whole pie rings in at just under $20. Feeds a sizable crowd, too.

Several Frizwits
You could bring any old cheesesteak sure, but if you want the best, you’ve got to go straight for the Frizwit, the platonic ideal of a cheesesteak made by Ari Miller of Musi BYOB with all locally sourced ingredients.

A tray of brownies from Second Daughter Bakery
People always forget dessert at a tailgate! Save the day with a tray of Second Daughter’s incredibly rich, fudge-y, Best of Philly–winning brownies.

A kilogram of Barbacoa from South Philly Barbacoa
Do you know how many pounds are in a kilogram? More than two! That’s a lot of lamb. A kilogram of the city’s finest barbacoa comes with all the fixings, including tortillas, salsas, and their incredible consome, which will ward off any hangover.

A party tray from Home Cuban Cafe
The party package from the newly opened Home Cuban Cafe in Old City includes a little bit of everything: mini cubans, their croquettes, beef empanadas, and house-made guava pastries. The packages are special-order only, and the team is happy to customize to your specific game day needs.

A canasta of tacos de canasta from La Canasta
Ok, no, you do not actually have to put your tacos in a canasta (basket), but it’s a good way to keep these steamy, warm pockets of taco warm and soft for the journey. Call ahead to order large batches for a Sunday game.