The Best Oktoberfest Celebrations Around Philly

The German beer fest is back, so grab a stein and a soft pretzel as big as your face — it’s time to party. 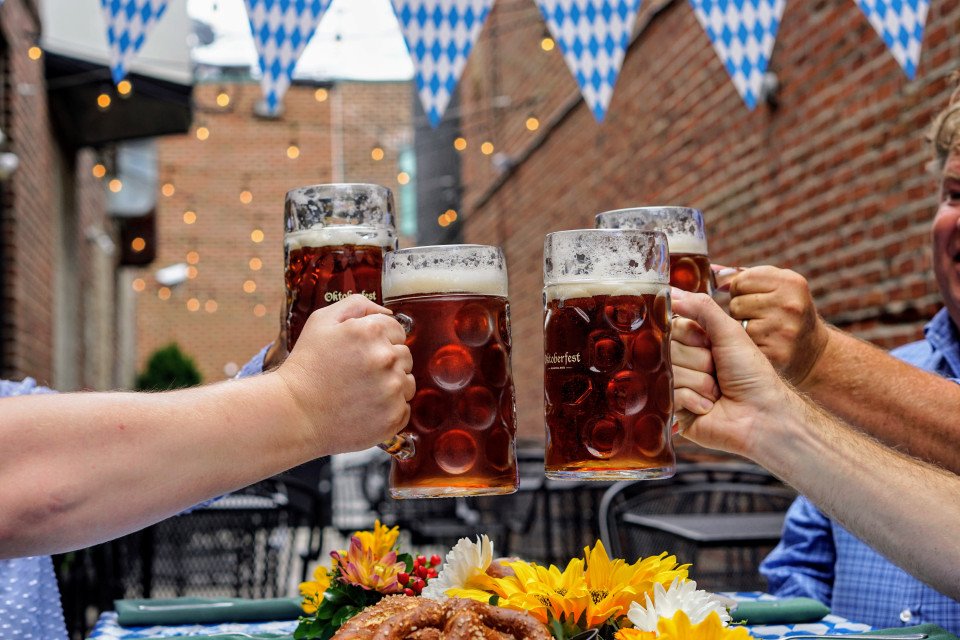 After two years off due to the pandemic, Munich celebrates its 187th Oktoberfest once more this fall. Closer to home, some old local favorites are also back — plus a bunch of new celebrations, too. We’ve got the best German beer-centric events where you can grab a giant stein and a soft pretzel as big as your face.

For more fall festivals, check out our guide.

DelcoFest
Coming out swinging, 2SP Brewing is hosting a party at its Aston-based brewery, and they’ve even created a special lager for the occasion. The afternoon will have live music from Polkadelphia, plus food trucks and three bars. The event is kid-friendly and includes carnival games and a photobooth, plus a stein-hoisting competition (winner gets $100 gift certificate to 2SP, so start strengthening those forearms), and a cornhole tournament hosted by Heyday Athletic. 2SP will also be selling some limited-edition DelcoFest merch, including $20 steins that include a pour from whatever you like on draft.
Free, pay-as-you-go; September 10th, 1-8 p.m., 2SP Brewing, 120 Concord Road, Aston.

Barktoberfest
Oh yes, the dogs are getting in on the action at the PHS pop-up garden on South Street. The party will have treats for the pups from Amelie’s Bark Shop, plus a “doggie lederhosen costume contest,” which, of course, begs the question: Is there a purveyor of tiny, four-legged lederhosen or are dog-lovers making them in their spare time? Find out, plus enjoy raffles, stein-holding contests, and drink-and-food specials. Don’t have a dog of your own to dress up in traditional German garb? Morris Animal Refuge will stop by, so maybe you’ll say guten tag to a new furry friend.
Free, pay-as-you-go; September 15th, 5-8 p.m., 1438 South Street.

USA vs. The World: An Oktoberfest Celebration
If you enjoy things more when there’s a little competition involved, Human Robot has the party for you. Breweries from Philly and beyond will be pitted against their German ancestors to determine whose lager is best. Plus, eat Oktoberfest fare from Mom Mom’s Kitchen and Rowhome Coffee, enjoy live music and entertainment from the West Philadelphia Orchestra, and play games. The outdoor event is running rain or shine, and for ages 21 and up. Tickets available online. Human Robot also has brewed a special Oktoberfest beer in honor of the season.
$25-$55; September 17th, noon-5 p.m., Sunflower Philly, 1725 North 5th Street.

Victory Brewing Company
The taproom will be adding German-inspired menu items all week, plus $4.50 pours of their special Oktoberfest brew, Festbier. Then, on October 1st, they’ll be offering those same specials, plus Polkadelphia will be performing from 6-8 p.m. for extra festiveness.
Pay-as-you-go; starting on September 17th, 11 a.m., 1776 Benjamin Franklin Parkway.

Fishtown Feastivale
So … this event used to be called Fishtown FestivALE and now it’s called Fishtown Feastivale. Why does this distinction matter to anyone beyond case-sensitive robots? Well, as the event website will tell you, the new name denotes a stronger focus on local food, not just beer. So, alongside your favorite beers and cocktails (of which there will still be many), you can chow down on burgers, brisket and Bavarian pretzels. Plus, carnival games, a dunk tank, DJ sets, and over 50 art and retail vendors. This event is family- and dog- friendly, too.
Free, pay-as-you-go; September 24th, noon-8 p.m., Frankford Avenue from Girard to Columbia Avenue and side streets (Master Street from Front to Frankford, Thompson from Front to Frankford).

Fall for Ardmore Festival
Head to Schauffele Plaza (outside Tired Hands) in Ardmore for food, beer, live music, and fun for all ages. Tired Hands Brewing Company, Levante Brewery and Iron Hill Brewery will bring the beers, while Jack McShea’s, Ripplewood Whiskey and Craft and Sophie’s BBQ will serve up Oktoberfest-inspired snacks like bratwurst, sauerkraut, pierogies, and Bavarian pretzels — plus a hot-dog station that will have “specialty mustards,” brisket sandwiches, pork belly and ribs. And if you’re looking to elevate your experience, spring for the VIP Beer Garden with reserved seating and pre-paid drink tickets.
Free, pay-as-you-go (VIP tickets extra); September 24th, 2-6 p.m., 99 Cricket Terrace, Ardmore.

Libertee Grounds’ Oktoberfest
The mini-golf bar’s Oktoberfest celebration expands outside into their beer garden with an all-ages party including face-painting, Oktoberfest-themed food specials and live music by Polkadelphia. Not to let their golf course go to waste, the party will also include a “Putt n Chug” competition to see who can chug a half-liter stein and nail a hole in one the fastest.
Free, pay-as-you-go; September 24th, 3-7 p.m., Libertee Grounds, 1600 West Girard Avenue.

Oktoberfest with Tiny Dynamite
And now for something completely different (but not different enough to not have beer and Bavarian snacks, don’t worry). Gather in the Physick House garden for a fall celebration in the form of a show that includes comic scenes, short stories, and jokes centered around autumn. Before the performance there will be lawn games, Bavarian snacks, and beer selections from local breweries. Each $25 ticket includes the show, a drink and a snack. Proof of vaccination is required.
$25, September 30th-October 2nd, 6:30 p.m., Physick House Garden, 321 South 4th Street.

Oktoberfest at La Cabra Brewing
Enjoy beloved seasonal beers, traditional German fare, and a variety of yard games and live music. Lederhosen and dirndls are encouraged! La Cabra will bring back their seasonal Oktoberfest beer in addition to other traditional German-style beers and, brand new to the lineup, an “Altbier” brewed especially for the event. They’ll also be selling 20-ounce glass mugs for the event — and your first pour is free with purchase.
Pay-as-you-go; October 1st, 1-6 p.m., 642 Lancaster Avenue, Berwyn.

Oktoberfest at Craft Hall
This location is probably the most family-friendly Oktoberfest around, since it has a playground right in the middle of the beer hall. Craft Hall’s celebration also includes traditional biergarten decor, Oktoberfest-themed menu additions and barbecue specials, beer steins for sale (with discount refills) and even a special Oktoberfest beer from on-site brewery Mainstay. Plus, the kids (or you) can decorate pumpkins ($5-$10), because why not? Bring your dogs too, there’s a Puppy Porch.
Pay-as-you-go; October 1st-6th, Craft Hall, 901 North Delaware Avenue. 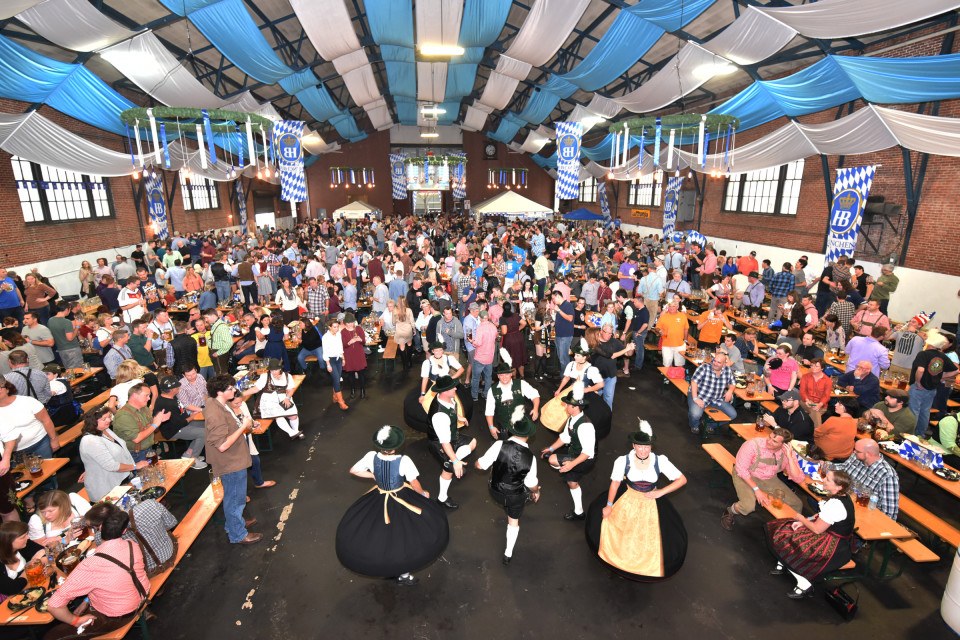 The Armory is transformed into a German beer hall for Oktoberfest. / Photograph by HughE Dillon

23rd Street Armory Oktoberfest
After two years off, the two-day Armory Oktoberfest is back, transforming the 16,000-square-foot fortress into a Munich-inspired festival tent with blue-and-white-striped ceilings, tables and benches imported from Germany, and a lofted stage for musical acts, which will include the Bratwurst Boys (amazing band name) and Brauhaus regulars Die Heimatklänge — along with German dancing. Expect traditional Oktoberfest food (soft pretzels as big as your head!) and beer from Hofbräu München in giant steins, naturally. Tickets are by the session — choose one of three four-hour timeslots across Friday and Saturday) — and include one liter of beer (it’s pay-as-you-go after that). VIP access gets you an extra liter, reserved seating, food, “VIP bathrooms” and early entry. There’s also “UBER VIP” option, which adds on unlimited food, table service, and after-dinner schnapps (and must be purchased in groups of four or eight).
$25-$85; October 7th and 8th, 22 South 23rd Street. 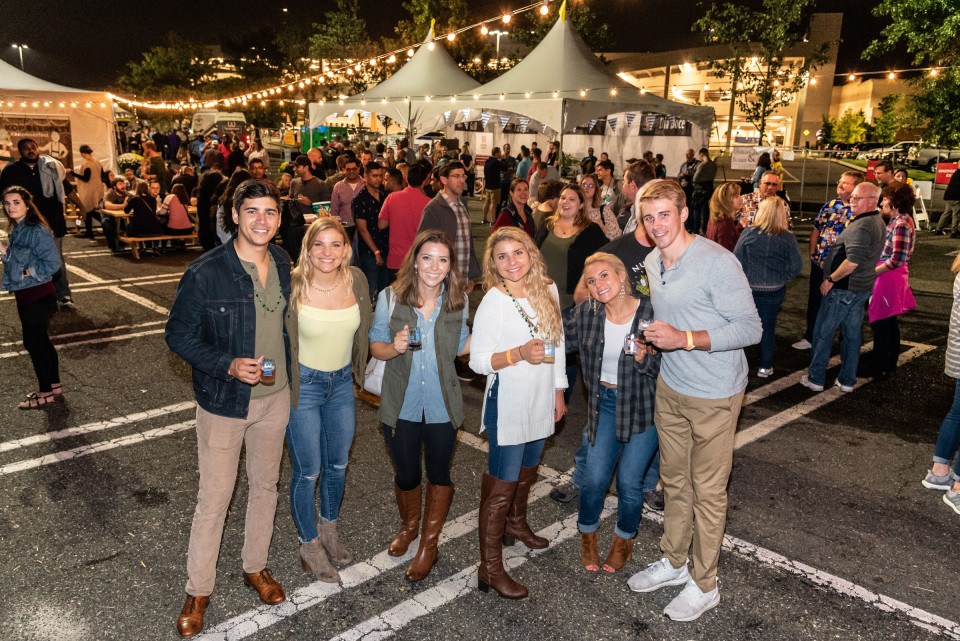 Roxtoberfest
In its 10th year, Roxborough’s annual fall street festival features craft beer, German folk music, food trucks, and Oktoberfest-themed competitions: a lederhosen/dirndl costume contest (for people and dogs) and stein-holding. In addition, there will be over 70 arts and craft vendors and a kids’ area with face painting, Music with Gina, and storytime with Flyleaf the Book Fairy.
Free, pay-as-you-go; October 8th, noon-6 p.m., Ridge Avenue between Lyceum and Leverington avenues.

Oktoberfest at Morgan’s Pier
Tickets to Morgan’s Pier’s Oktoberfest afternoon extravaganza include an open beer bar, unlimited soft pretzels, and (for the first 200 tickets sold) a Morgan’s Pier stein. Plus, there will be German-inspired food specials, and live and DJ music sets. Early-bird tickets are $50, then the price goes up to $60. Tickets go live soon, so stay tuned.
$50-$60 (plus pay-as-you-go entrees); October 8th, noon-4 p.m., Morgan’s Pier, 221 North Columbus Boulevard. 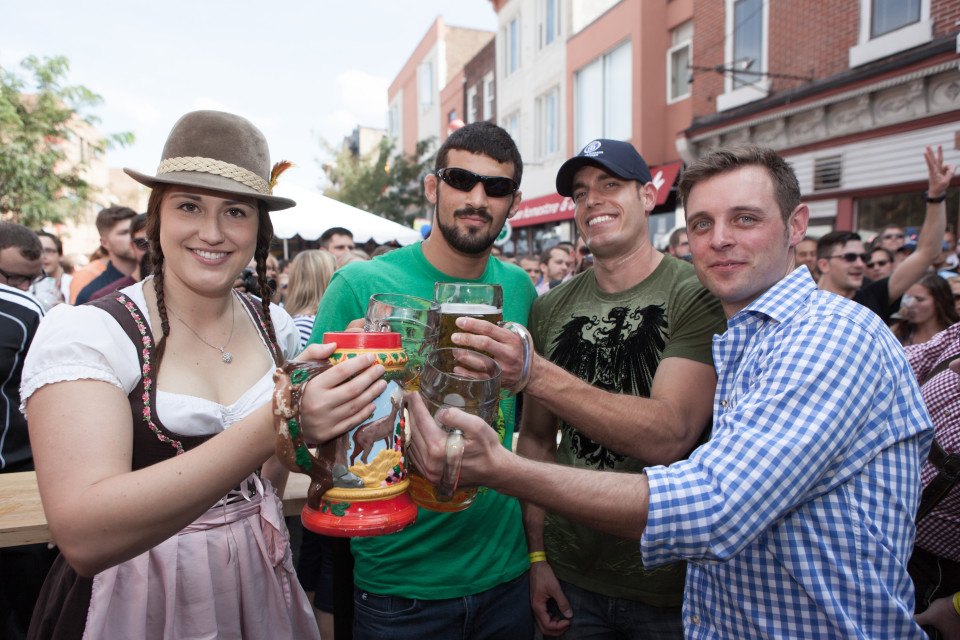 14th Annual South Street Oktoberfest
Brauhaus Schmitz lives every week like it’s Oktoberfest. On October 1st, they’ll take over the 700 block of South Street (at the same time as South Street Fest) with live music and German dancers, games, face painting, and the “liter lift” competition where the person who holds a full beer stein for the longest wins. Plus, as always, abundant German food and beer from a place that specializes in it all year long. You can also upgrade to $120 all-inclusive VIP experience which gets you private access to an indoor space (with bathrooms), a buffet with Bavarian food favorites, exclusive draft offerings, seven beer tokens, and a commemorative liter mug and t-shirt.
Free, pay-as-you-go (VIP tickets are $120); October 15th, noon-8 p.m., Brauhaus Schmitz, 718 South Street.

Not actually Oktoberfest but gets honorable mention for its name: GOAToberFest
Philly Goat Project’s fundraiser at West Laurel Hill doesn’t seem to have any German-beer-inspired vibes, aside from its name. But if you’ve always wanted to drink cocktails while playing with goats, taking photos with goats, bidding in silent auctions for “exclusive goat experiences” and art created by goats, and generally raising money for the very worthy and adorable Philly Goat Project, PGP would love the honor of your presence on October 8th. They say that 13 goats will be present, which is delightfully specific (If it were only a mere dozen of goats, forget about it!), and they’ll be launching their 2023 calendar which features the goats at Philly landmarks. The event is for ages 21 and up, and there are only 100 tickets, so get on it.
$65; October 8th, 4-6 p.m., Laurel Hill West Conservatory, 215 Belmont Avenue, Bala Cynwyd.