Your first meal of 2022 could set the tone for the next 12 months. Don’t miss your opportunity to make it delicious. 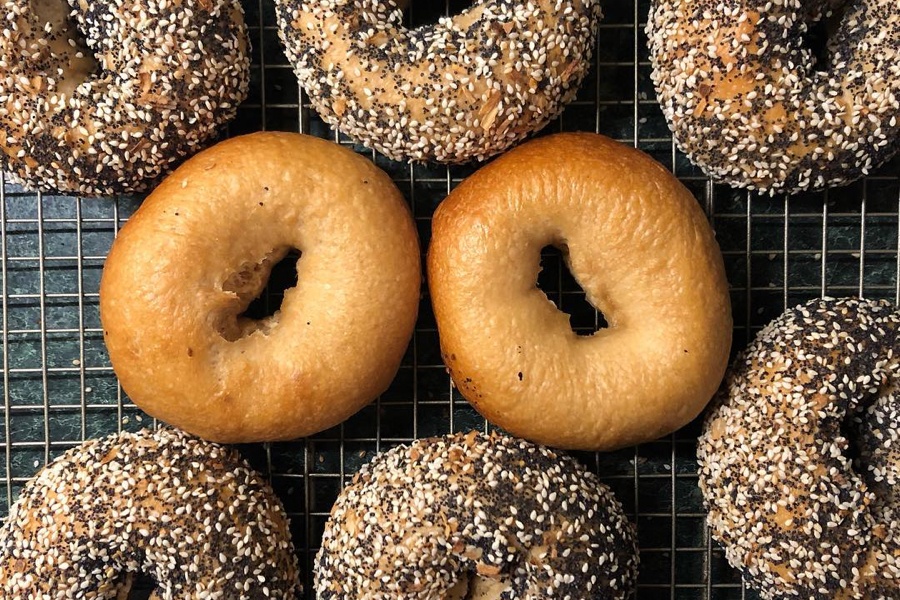 Korshak Bagels will be open on New Year’s Day.

Your first meal of the new year is of the utmost importance. If you wake up, roll out of bed, and eat a measly bowl of cereal, what kind of precedent does that set for the entirety of 2022? Not a good one. Instead, make a plan in advance. Going out the night before? Plan for something comforting, like a bowl of pho or some gigantic pancakes. Staying in? Maybe you’ll be among the lucky few to get your hands on the first Korshak Bagels of the year. There’s something for everyone. Just don’t be the person who lets the first meal of the year go to waste. Here, our list of the best New Year’s Day breakfast spots in Philly.

JG Skyhigh, Center City
If you decide to go low-key for New Year’s Eve, why not go over-the-top for New Year’s Day? Local musician Luke O’Reilly will be performing, and the mimosas (or just freshly squeezed juices) will be flowing.

Cake and Joe, Wharton
Cake and Joe has it all for breakfast: great coffee, a sugar rush from all their classic mousse cakes, and excellent egg sandwiches served on Lost Bread milk bread.

Vanilya, East Passyunk
Vanilya is always a great spot for a quick morning bagel (we’re particularly fond of a za’atar bagel with scallion cream cheese and an egg), but they’ll be offering a special sandwich with their housemade pastrami for an extra-delicious bagel.

Pho 75, Bella Vista
You know how people drink Gatorade to replenish their electrolytes after a hard workout or a long night of drinking? At Foobooz, we approach pho in a similar way. If you wake up feeling less than great on New Year’s Day, head to Pho 75 and let their broth heal you.

Winkel, Center City
Sometimes nothing will do but a classic brunch option: Go to Winkel for omelets, waffles, French toast and pancakes that will get you ready for a nap later in the day.

Alma Del Mar, Italian Market
Alma Del Mar is the reigning champion of huge servings of every possible brunch food that you might want, from chicken and waffles and bacon-and-banana-bread French toast to eggs Benedict and a breakfast burrito.

Nom Wah Philadelphia, Chinatown
Dim sum is always a good brunch option, especially for a group. Nom Wah is our choice for the busy New Year’s Day brunch, because they take reservations and they serve alcohol.

Ember & Ash, East Passyunk
Ember & Ash is bringing back their now-gone breakfast sandwiches for one brunch only on New Year’s Day. No guarantees on which trick they’ll pull out of their bag for the holiday, but if Black Forest ham, Elizabeth Mangalitsa scrapple, or trout rillettes appeal to you, stop by for grab-and-go sammies from 10 a.m. to 1 p.m. They’ll have two meat options and a vegetarian option.

Korshak Bagels, East Passyunk
If you’re the kind of person who goes to bed at 9:30 on New Year’s Eve, you might also be the type of person who can actually get up early enough to get your hands on a bagel from Korshak on New Year’s Day. The good people at Korshak will be baking starting around 4 a.m., so be nice to them.