Where to Eat Donuts in Philadelphia

All our favorite places in Philly for these golden-fried goodies, whether stopping for breakfast on your morning commute or picking up sweet treats for a crowd. 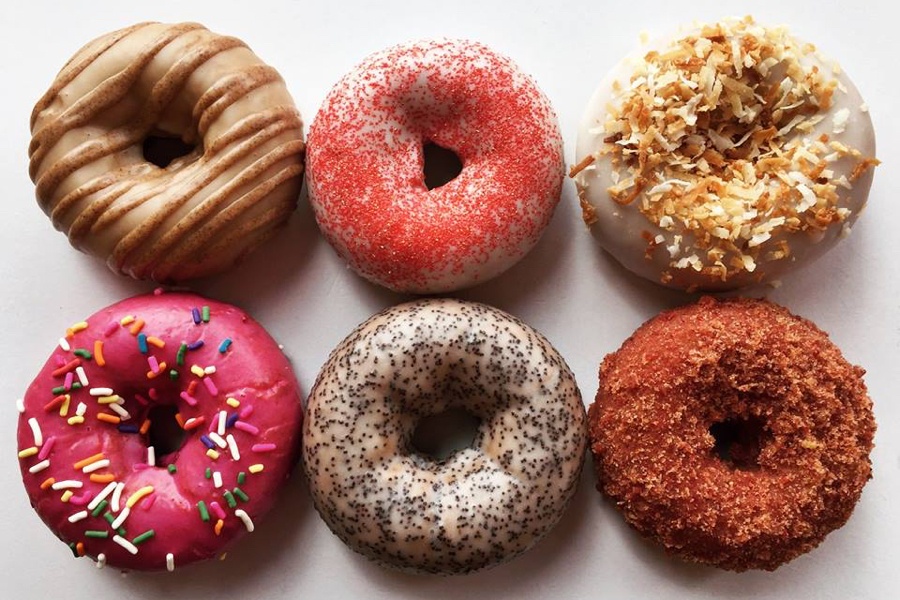 Few breakfast foods are as craveable as the donut. Yeasted, cake or filled, dipped in glaze, frosted or sprinkled with jimmies, dunked in a hot cup of coffee or eaten out of hand in the moment, nothing beats a hot, fresh one when the mood strikes. Whether you’re popping in for a quick breakfast on your commute, enjoying a leisurely brunch, or grabbing a dozen to share on a Sunday morning, these Philadelphia donut shops, restaurants, and wholesale-only makers have that tender, sweet, golden-fried goodness you’re looking for. Here are some of the best places to get donuts in Philadelphia.

Beiler’s Donuts, University City and Market East
This straight-from-Lancaster, Pennsylvania Dutch-owned company scored a Best of Philly when they added yeasted donuts to the menu at their Reading Terminal Market stand a few years ago. They make a ton of flavors, from Boston cream to peanut butter and jelly, but it’s the apple fritter that keeps us keep coming back.

Suraya, Fishtown
Even if you’ve never been to the Levantine market, cafe, and top restaurant in Philly, there’s a good chance you’ve seen the lone donut on its daytime menu — an Instagram-ready rose-pistachio cruller — all over your social media. It tastes just as good as it looks.

Curiosity Donuts, Spring House and Princeton
Arguably the region’s most sought-after donuts, Alex Talbot and Aki Kamozawa’s meticulously crafted fried dough experiments — they make a half-dozen base batters, fry donut holes into clusters that grab more glaze, and roast unsold pastries into crisp, toasty donut “crumbs” to top the next day’s batch — have to be tasted to be believed. Get them at their stand in the Spring House Whole Foods in Montgomery County Thursday through Sunday from 7 a.m. to sellout, or at the Princeton Whole Foods on Sundays from 10 a.m. until sellout. 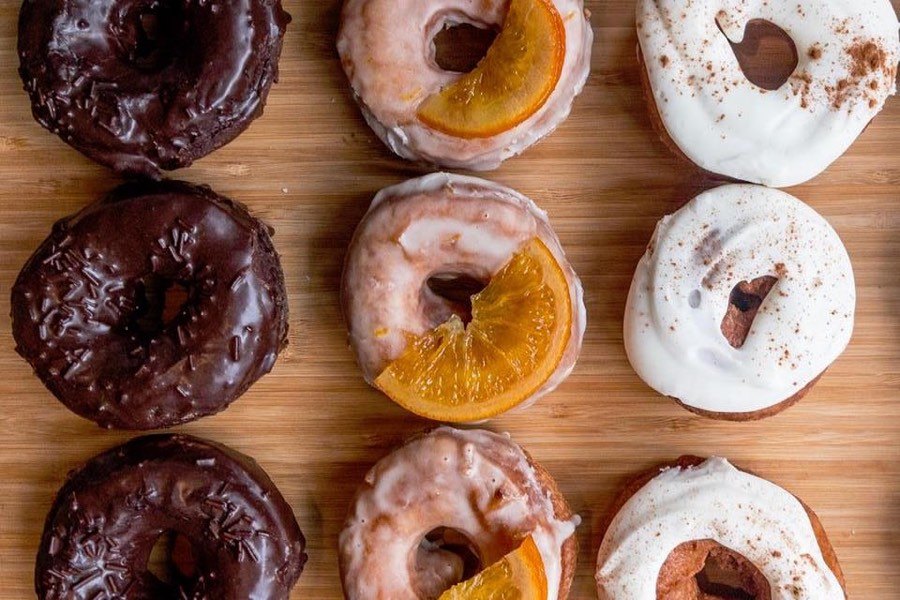 Okie Dokie Donuts, Various locations
Pastry chef Carol Ha’s wholesale outfit specializes in an I-can’t-believe-it’s-gluten-free version made with a blend of rice flour, tapioca starch, and potato starch. Try flavors like grapefruit honey cardamom and chai latte at Sulimay’s Diner in Fishtown every Saturday or at Ha’s other weekend pop-ups around the city.

Frangelli’s Bakery, South Philly
This old-school Italian bakery has been doing wonderful things with fried dough for decades. The Best of Philly-winning Frannoli, made with cannoli cream sandwiched within a hole-less donut, is a must-try. Pro tip: you can swap out the cannoli cream in favor of a scoop of ice cream instead.

Suzy-Jo Donuts, Bridgeport, East Norriton, and Limerick
This second-generation Montco donut shop boasts a long list of flavors, from peanut butter fluff to maple bacon to classic plain. Be sure to get there early for the best selection, as varieties tend to sell out.

Undrgrnd Donuts, Various locations
The city’s only donut shop on wheels pops up at street festivals, events, and private parties with treats dunked, dipped, or swirled with frostings and glazes, then studded with toppings like raw sugar, chocolate, and bacon chunks or cinnamon sugar and Red Hots.

Brunch is breakfast without an alarm clock. Stop by for your favorites, 9am – 2pm every weekend.

Double Knot, Midtown Village
The hybrid omakase-cafe has really upped its daytime game with a weekend brunch buffet, where you can enjoy bites like a bao bun breakfast sandwich and rotating selection of tender, airy donuts.

Factory Donuts, Mayfair
Choose from one of the house flavors, like strawberry lemonade or mint chocolate chip, at this cake donut specialist — or take advantage of their build-your-own-donut option. Just choose your base, your icing, your toppings, and your drizzle and they’ll make it to order.

Dottie’s Donuts, Spruce Hill and Queen Village
It shouldn’t surprise anyone that West Philly’s best-known donut spot is completely vegan. What will surprise you, however, is how good their dairy- and egg-free treats really are.

Lipkin’s Bakery, Northeast Philadelphia and Whitman
The long-running kosher bakery is known for knishes, but their crew makes a wide range of baked goods from breads to bagels to, yes, donuts — frosted, sugared, or glazed in a variety of flavors. 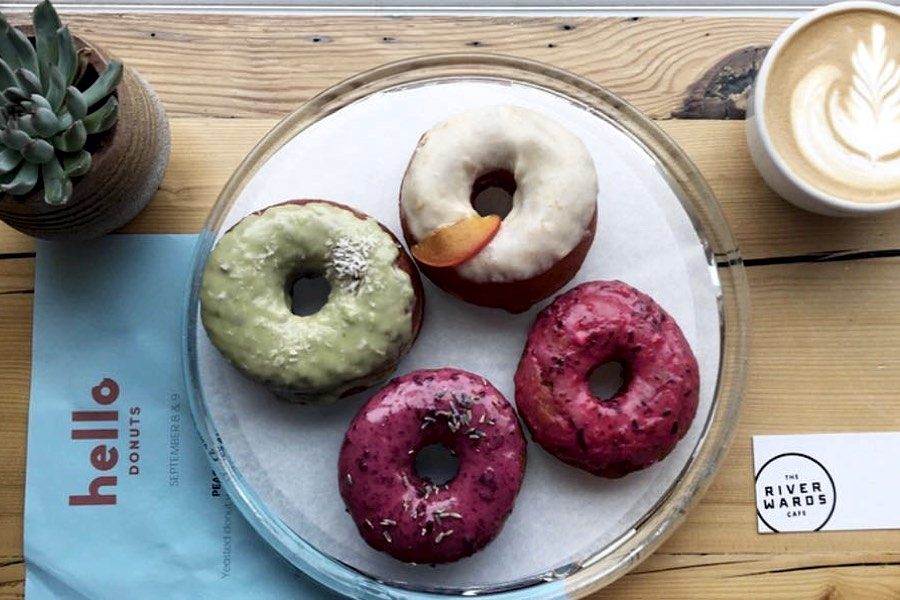 Hello Donuts, Various locations
Run by a crew of musicians, this new donut outfit has partnered up with the ReAnimator Coffee folks to open their own shop at Frankford and Amber Streets, and it’s getting closer. But for now, you can get their cake and raised rounds in flavors like blueberry pie with graham cracker and dark chocolate sea salt at ReAnimator’s cafes, River Wards Cafe, Lunar Inn, and Little Baby’s locations in Fishtown and West Philly.

Haegele’s Bakery, Mayfair
This Best of Philly-winning German bakery has been turning out sweet treats for three generations. While folks flock there for traditional fastnachts on Fat Tuesday, Haegele’s makes a full slate of filled, frosted, and powdered donuts for us to enjoy the rest of the year.

Yum Yum Bakeshop, Colmar, Warminster, and Quakertown
A Bucks County standby for half a century, this Best of Philly winner is the perfect spot to pop in for coffee and a cruller or stock up on breakfast for a crowd. But for a special occasion, you’ll want to special order a Big Kahuna, their monster-sized donut that’s big enough to ice with a celebratory inscription and feed a dozen of your donut-loving friends.