If you generally avoid the anarchic inferno that describes Center City Sips but you also generally enjoy $6 cocktails, these five restaurants warrant a little chaos every once in a while. 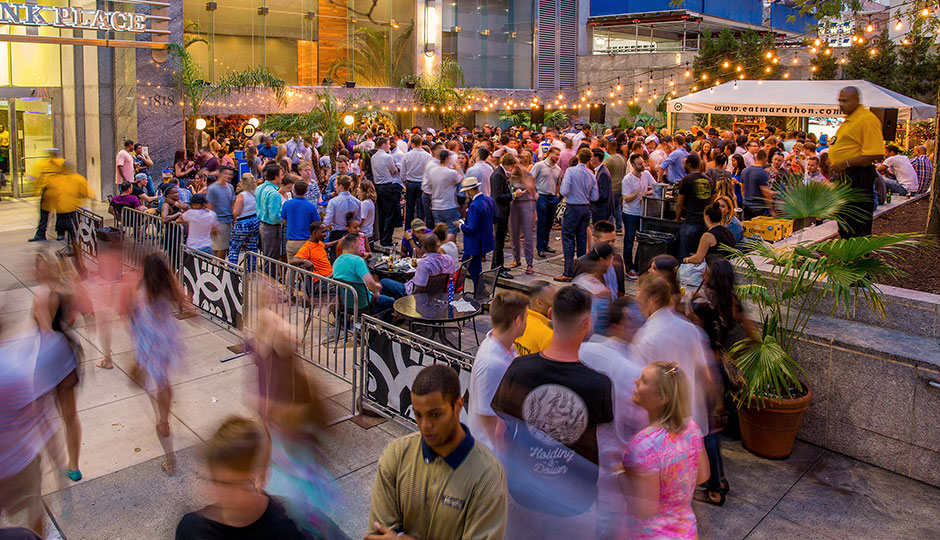 Center City Sips is back this summer / Photograph by Jeff Fusco

After two years off, Center City Sips — also known as the event that turns the city into “one giant frat basement” in the summertime — is back, baby. The simple concept works like this: Every Wednesday from June 1st to August 31st, a whole bunch of Philly restaurants offer Happy Hour specials on drinks and food causing the city’s office workers (or anyone in the area, really) to descend into a feeding frenzy of booze and small plates. Some Center City Sips spots also have a 15-percent discount if you hang out for a full meal afterwards.

In theory, the series is supposed to drive business for restaurants during a season when weekend sales are down significantly, as everyone goes down the shore. Needless to say, the vibe always skews messy for me. Staff are typically overwhelmed (this is your reminder always, always tip 20 percent on both food and drinks), and the food isn’t typically super exciting. But this year there are a couple of places on the list that I would genuinely recommend frequenting on a Wednesday, even if you typically stay away from Center City Sips crowds.

Gabi
Gabi is a great Sips option for two reasons: It’s close to the Spring Garden and Race-Vine SEPTA stops, slightly beyond the chaos of Center City in case if you want to, you know, actually sit down and be able to hear yourself think. Secondly, Gabi has not one but seven choices of $6 cocktails, including a watermelon margarita, a cucumber gimlet, and an espresso martini. Pair those with a $6 cheese board and you’re bound for a successful Sips experience. 339 North Broad Street.

Dim Sum House by Jane G’s
Dim Sum House is one of those places that proves dim sum is good for all-the-time snacking, not just weekends. Jane G’s Sips deals include a $6 tequila cocktail, $5 red or white wine, and most importantly: $4 Heineken and half-priced scallion pancakes. Jane G’s does deliciously flaky, crisp scallion pancakes, which are especially perfect while you chat with the HR person from your office with whom you have nothing in common. 1930 Chestnut Street.

Prunella
Prunella’s Sips deal is your opportunity to get into a cool new restaurant, without needing to make a reservation and have a whole meal. It’s inevitably going to be crowded during Sips because it’s on 13th Street, and because the deals are good. Prunella has $9 pizzas, plus two options of $6 cocktails, $5 wine, and a ton of snacks like arancini, mozzarella en carozza, and sausage bread. 112 South 13th Street.

Good Luck Pizza Co.
Obviously the classic Citywide special refers to a shot and a beer, but what about a slice and a beer? That’s what $10 can get you at Good Luck Pizza Co. during Center City Sips. You might as well throw in some calamari, mozzarella bites, and sweet and spicy wings as well. 105 S. 13th Street.

Tequilas Restaurant
If you’ve never been to Tequilas Restaurant on Locust Street, change that about yourself. This long-standing restaurant (that’s been around since the ’80s) was one of the first places to forge a lane for high-end Mexican food in this city. They haven’t yet announced their Sips deals, but their regular happy hour is incredible: $8 white-rum daiquiri (the good kind, not the cruise ship kind) plus high-quality agave spirits, and simple food like guac, fish tacos and nachos. Plus, Tequilas offering 15 percent off dinner for Sips sippers, and you should really take them up on that. 1602 Locust Street.