The beloved Filipino food cart will open in its permanent Bella Vista home during the first week of December. 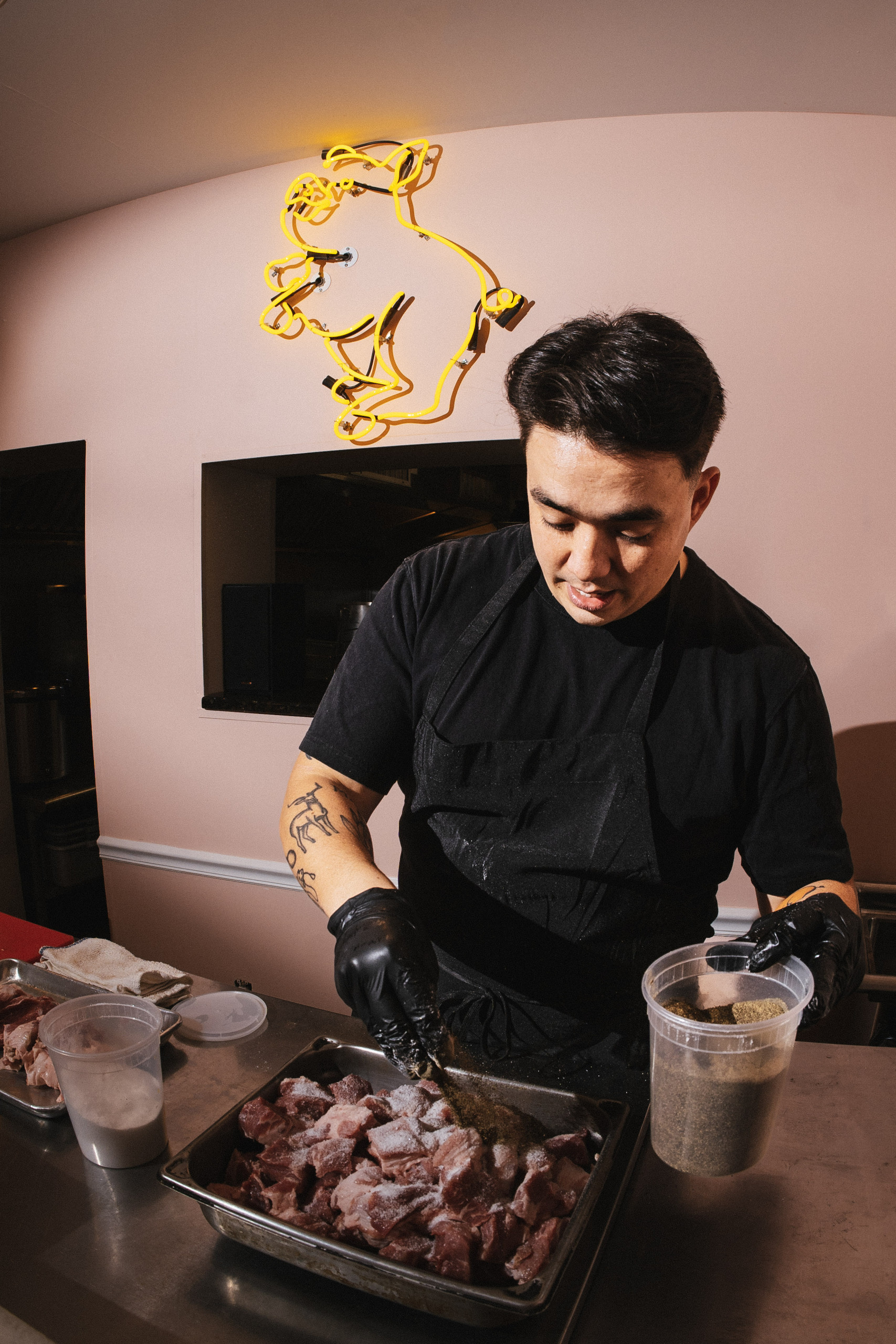 On a rainy Friday in November, Chance Anies is chopping pork shoulder underneath a neon sign shaped like a pig. The porky connection isn’t lost on Anies. It’s by design.

Pork — fatty, comforting, rich pork — lives in the very DNA of Tabachoy, Anies’s Filipino BYOB set to open in the first week of December in Bella Vista. The restaurant’s name translates to “chubby” in Tagalog, always spoken with love. “That’s been our baby,” Anies says of the plump pig above his head, its yellow glow haloing each two-inch hunk of meat on the cutting board where he’s prepping pork adobo. Once the meat is trimmed and cubed, Anies will season the batch with plenty of salt and pepper before browning it in a pan. Then he’ll sweat out some onions, garlic, and perfect matchstick cuts of ginger, letting the whole mixture braise in vinegar and soy sauce for about an hour until the pork is no match for a fork and the sauce is just shy of syrupy-thick. “I love a piece of meat that has a decent amount of fat,” Anies says while he makes cuts. “I see fat and I’m like ‘Yo, this is what I want.’” 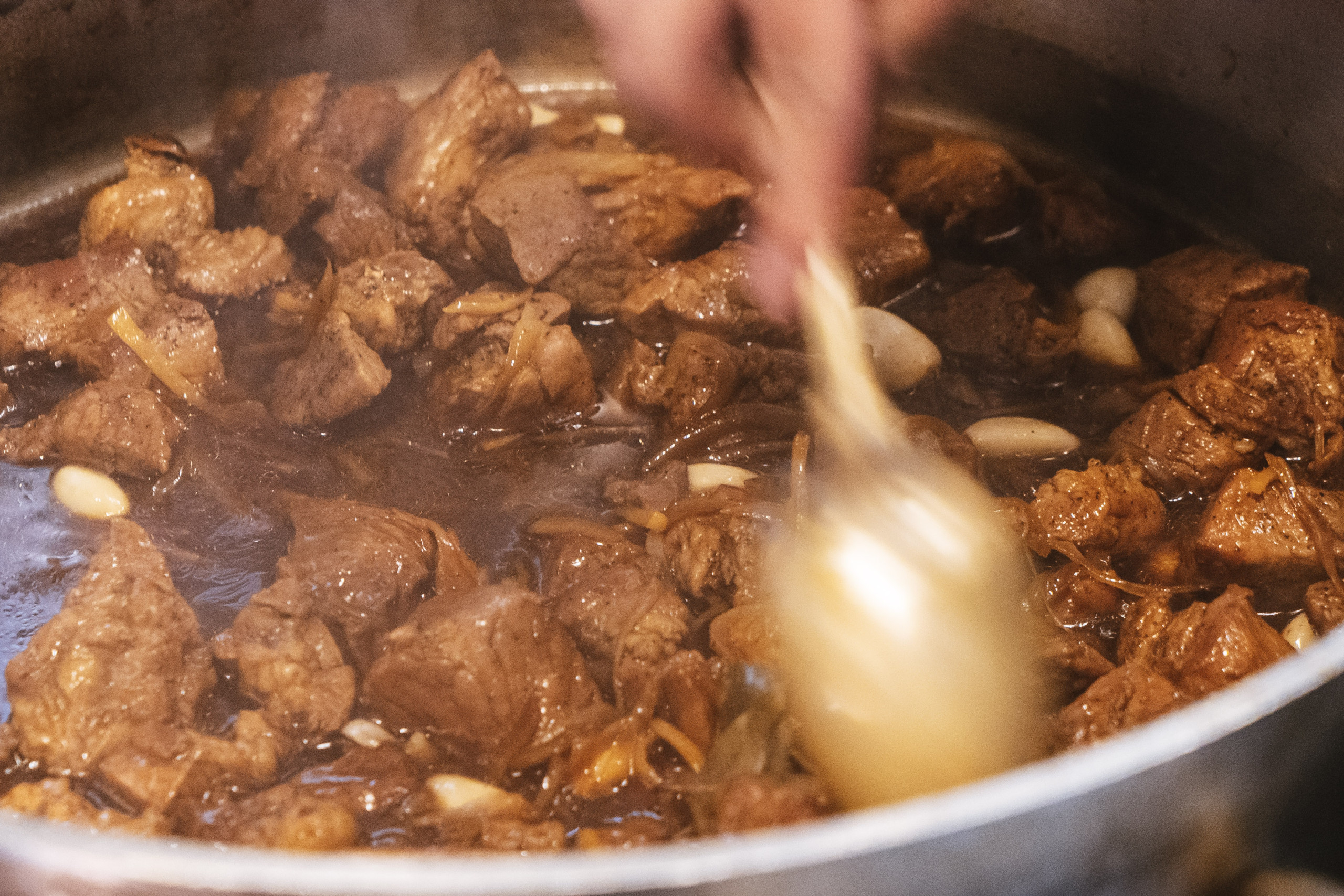 Much of Anies’s cooking inspiration comes from memories of his dad, a Navy chef turned private chef who would often make pork adobo for Anies and his family at home in Virginia. “It’s a dish that every Filipino family knows how to cook, and every single person’s adobo is different. No one does it right, but also no one is doing it wrong,” Anies says of the national dish of the Philippines. “Ours is not traditional.” Anies’s recipe replaces coconut vinegar or cane vinegar with balsamic vinegar. The result tastes more sour and fruity than it does sweet, as if a glug of balsamic hit the sauna with some bay leaves and garlic. “You’ll go to most Filipino restaurants and nobody is really doing adobo. Unless you go to a mom-and-pop shop,” Anies says. When Tabachoy opens, Philly diners can try Anies’s pork adobo for themselves. It’s one of the dishes he’s hoping will make his place stand out in a city with few Filipino restaurants, one of the dishes that feels unquestionably connected to how Anies sees himself and how he wants Philly to see him.

Three years ago, Anies started Tabachoy as a mobile food business after a succession of what-am-I-doing-with-my-life moments led him from a stint as a ninth-grade English teacher in West Philly to conducting medical research at Temple to purchasing a four-by-eight-foot cart for $2,500. At the time, he had never cooked professionally, and the food cart gave him the opportunity to learn how to feed the masses without the operational and financial burdens of running a restaurant. Even as Philly’s restaurants remained closed during the early months of COVID, Tabachoy gained traction around the city as an outdoor-only business, serving $8 rice bowls as well as Filipino-inflected cheesesteaks and fried-chicken sandwiches topped with achara. And Philly showed up. (As did several industry veterans looking to pick up hours, like Nick Pinelli, and Dan Griffiths and Jake Loeffler of Paffuto. Anies attributes much of his business’s success to their talents, and he’s hired several of those chefs to work at the sit-down restaurant in Bella Vista.) “I got very lucky that the cart didn’t explode and that people were receptive to Filipino food because there was a chance that they weren’t going to be.”

But Tabachoy was never supposed to be just a food cart. In September of 2021, Anies and his wife Maria signed a lease on a restaurant space that would end up falling through due to financial and permitting complications. Then, in the summer of 2022, they found Tabachoy’s current brick-and-mortar location. 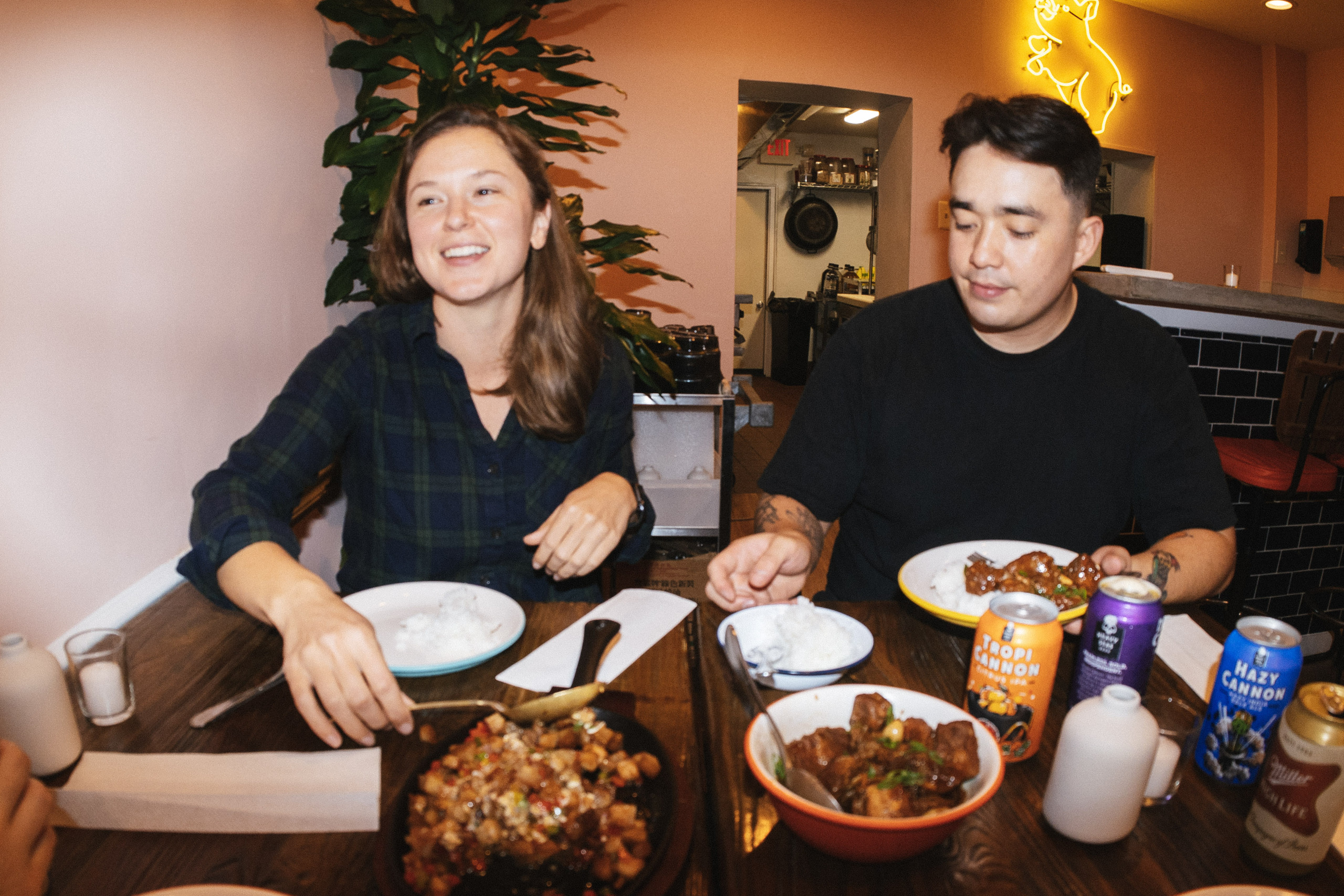 Anies and his wife Maria, a co-owner and “the brains of the operation,” as Anies calls her.

“Filipino food and Filipino culture is like 50 percent food and 50 percent hospitality,” Anies says. “Being a food truck, we’ve been able to give the food side but we haven’t been able to show the hospitality side of Filipino culture.” Anies imagines diners arriving at the new Tabachoy and feeling like they’re walking into an old friend’s house, like somewhere they can lounge and never encounter a server formally asking them, “Have you dined with us before?” (Anies says this phrase drives him nuts when he dines at upscale restaurants; it makes him feel unwelcome.) 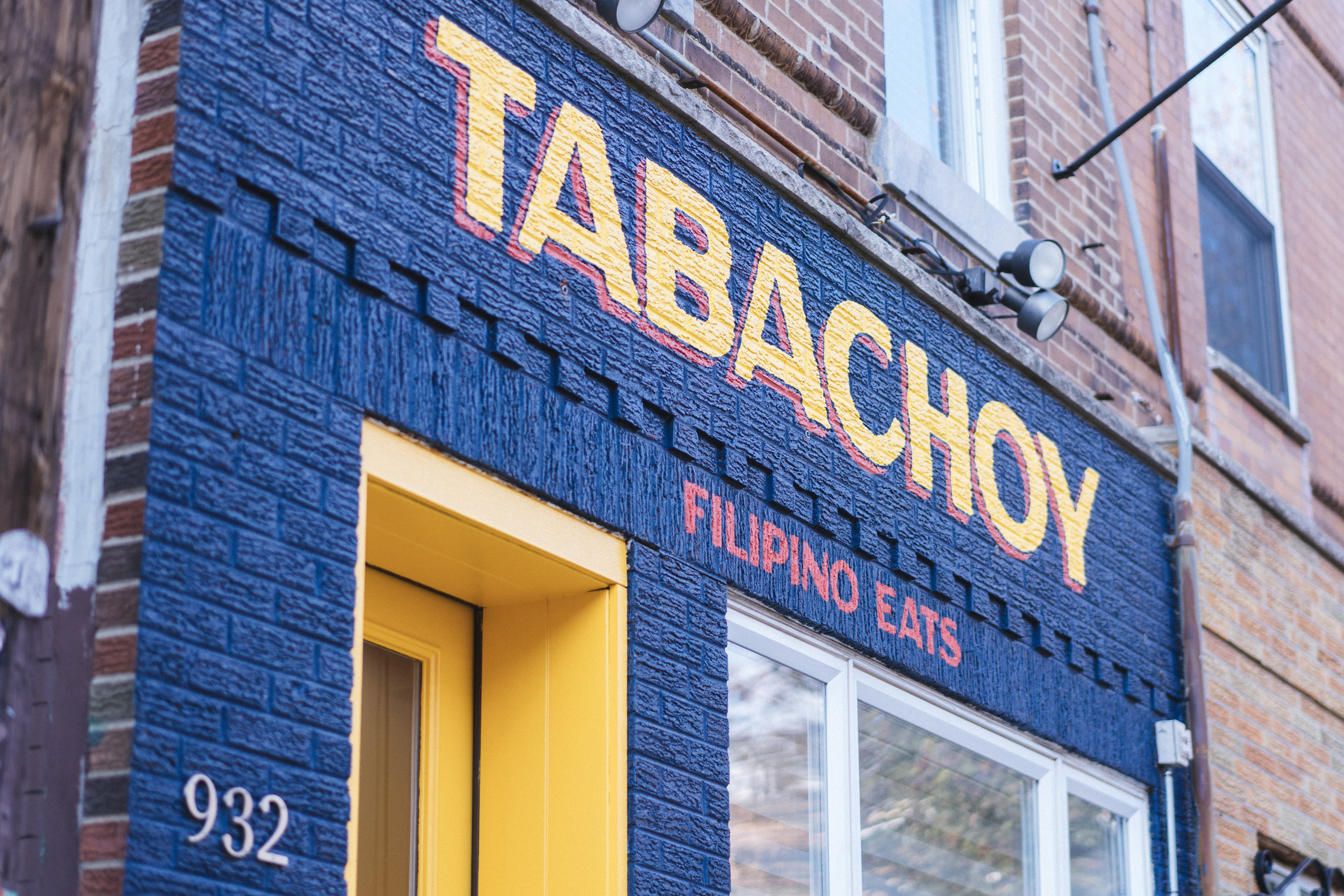 Tabachoy will be open from 5 p.m. to 9 p.m. Wednesday to Sunday for dinner service. Anies plans to offer lunch service as soon as the team gets their footing (think sandwiches and rice bowls). Reservations will be available on Resy.

Hospitality aside, Tabachoy’s 28-seat restaurant has serious Fun Potential. The walls are pink and dotted with framed prints. During service, speakers will play Anies’s favorite hip-hop from the ‘90s and early 2000s. The kitchen staff —whom Anies says will be tipped out on top of making a living hourly wage — will bring out dishes straight from the kitchen. He’s even planning a communal beer fridge where the restaurant will initially stock complimentary beer and you can leave whatever cans you don’t finish in your six pack so someone else can enjoy the BYOB experience even if they forget their booze.

Anies is hoping the comforting feel of the dining room will carry over to the way diners engage with the restaurant’s food. He admits the concept differs from the food cart: Tabachoy (the restaurant) will start with a dinner-only menu of roughly 15 dishes ideal for sharing, like twice-fried chicken, pancit noodles with snap peas and carrots, pork-belly sisig, garlic rice, crispy lumpia, and grilled lemongrass shrimp in an annatto vinegar. Expect a rotating soft serve flavor available all year, starting with ube. 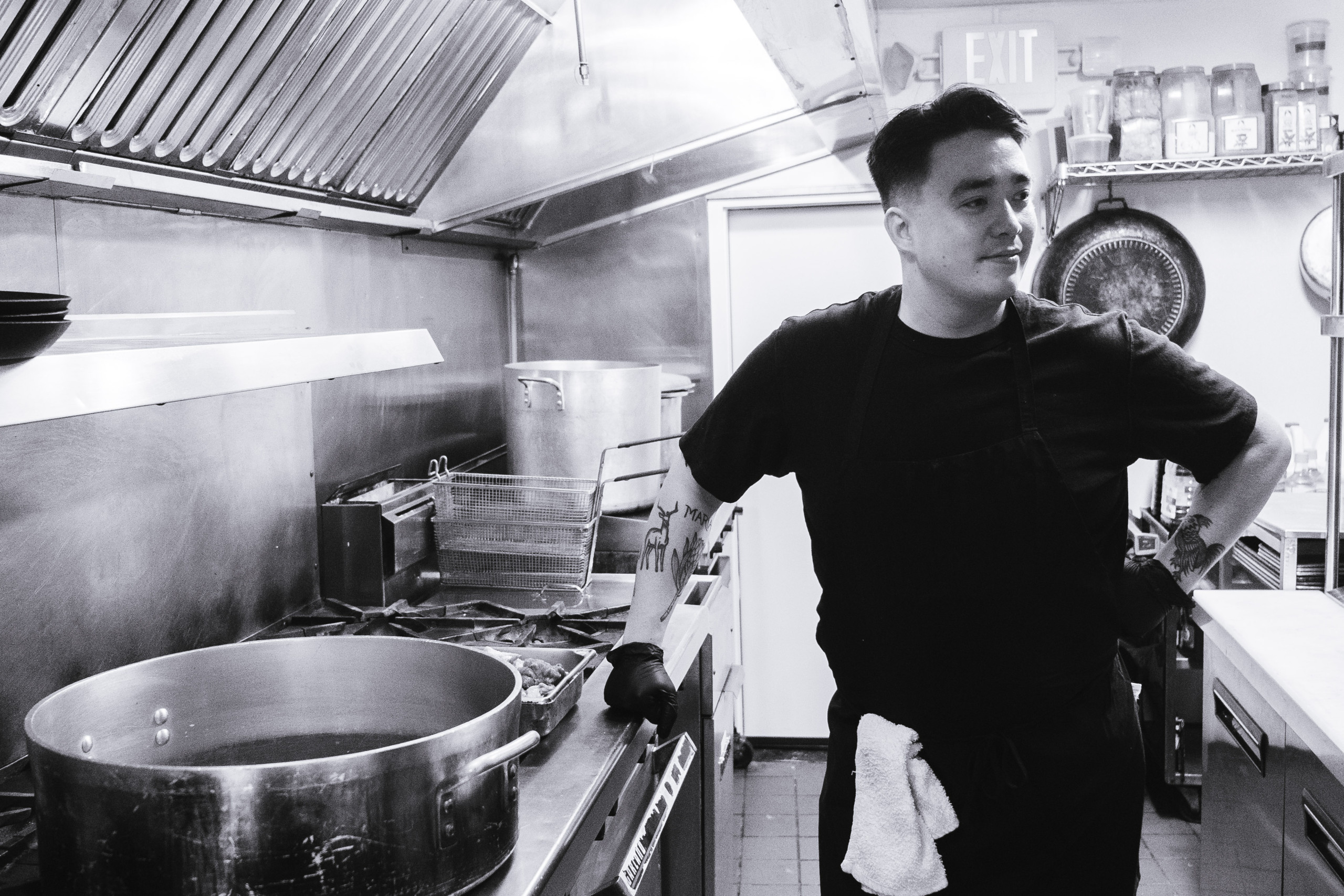 Anies in the kitchen at Tabachoy, which used to be home to the Indonesian restaurant Jembatan 5.

Unlike the food cart (which will stay in operation for events and catering gigs), Tabachoy’s sit-down spot isn’t serving the sandwiches and handheld, snacky options that sold well at breweries and park pop-ups. It’s a risk that Anies is banking on his customers understanding, despite already having received messages from people asking for his cheesesteak whenever it’s not available at a pop-up event. Tabachoy’s sit-down menu reflects Anies’s deep consideration of his own identity: “I fully believe in what I want this space to be, and I’m going to live by that or I’m gonna die by that,” Anies says. “I want Filipinos to find my space, like I want this to be the spot that they want to show their Filipino family. But, as a biracial Filipino kid, Filipinos don’t always see me as Filipino.”

Anies says, ultimately, he just wants the place to feel like his own: “We could have probably opened in August, it just wouldn’t have been Tabachoy. It wouldn’t have felt like ours. I was like, ‘No I want this to be mine.’” To all the Tabachoy sandwich stans out there, know that Anies plans to offer lunch service in the future, including that beloved cheesesteak. But once 5 p.m. hits, the pig above the pass lights up and pancit, pork adobo, and lechon kawali take center stage.

Tabachoy will be open from 5 p.m. to 9 p.m. Wednesday to Sunday at 932 South 10th Street. Reservations available on Resy.