The story behind Doro Bet’s lemon-turmeric fried chicken, how it’s made, and why you should be going out of your way to eat this newly invented Ethiopian dish. 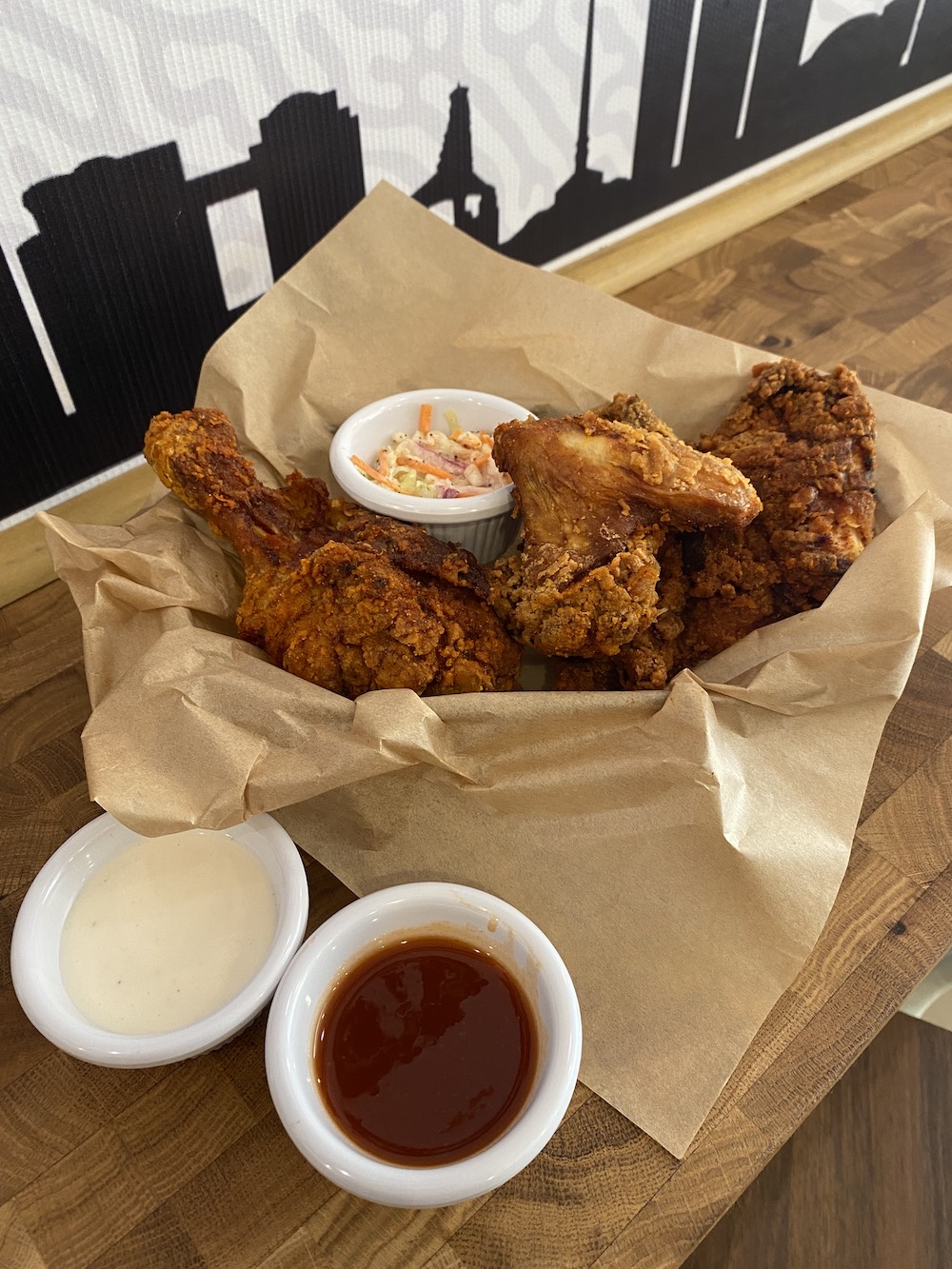 Welcome to Just One Dish, a Foobooz series where we write about an outstanding item on a Philly restaurant’s menu — the story behind the dish, how it’s made, and why you should be going out of your way to eat it.

Got a dish you think deserves its own spotlight? Send a tip to halbertine@phillymag.com.

There’s fried chicken and then there’s Doro Bet’s lemon-turmeric fried chicken. Citrus-steeped, peppery, and earthy from turmeric, this chicken isn’t so dissimilar from a Lemonhead sucker candy that found its way through a seasoning carwash. Despite only being fried once, its skin stays as craggly and crisp as twice-fried Korean fried chicken, but with a totally different seasoning base.

Once you eat a half or whole bird at the new West Philly (mostly takeout) spot on Baltimore Avenue, you’ll have a hard time returning to any fried chicken lacking Mebruka Kane and Hayat Ali’s Ethiopian spices. The business partners, who also happen to be the sisters who operate Salam Cafe and Alif Brew, opened Doro Bet in the fall of 2022 showcasing two types of Ethiopian fried chicken: the aforementioned lemon-turmeric version and a spicier, awaze-drenched option. No copycats of these dishes exist elsewhere in Philly (or pretty much anywhere in the country save for a new spot in D.C.). Kane came up with the concept in her home kitchen during the pandemic.

“It’s my kids’ fault,” Kane says. “They’re eight and six, and their tastes have changed. All they want to do is just eat chicken.” During lockdown, Kane and her husband fell into the habit of making fried chicken at home to satisfy her kids’ cravings for Chick-fil-A and Popeyes. It was then that Kane realized her kids’ fast-food-style, American fried chicken was missing something: “I like to put Ethiopian spices on everything. I told my husband, ‘Imagine an Ethiopian fried chicken. Like if I can put awaze on this, it would taste so much better.’” Kane decided to marinate the chicken in her family’s berbere paste, sourced from a sister in Ethiopia and prepared according to a recipe that’s been passed down on her mother’s side for at least three generations. According to Kane, most Ethiopian households have their own distinct methods of making berbere: “Some people put like 20 different things in it. Some people do two or three.” Her family’s berbere incorporates cumin, garlic, ginger, black cardamom, fenugreek and rue, plus red chili peppers dried in the sun for days that give the spice mixture a sharp smokiness with a fruity aftertaste. As Kane expected, the awaze brought the bumped-up flavor she was craving. But, now, the fried chicken was too spicy for the kids. Kane and her husband schemed an alternative: a milder version made with lemon and black pepper, like a play on lemon-pepper chicken with even more lemon juice and the added warmth and bitterness of turmeric. 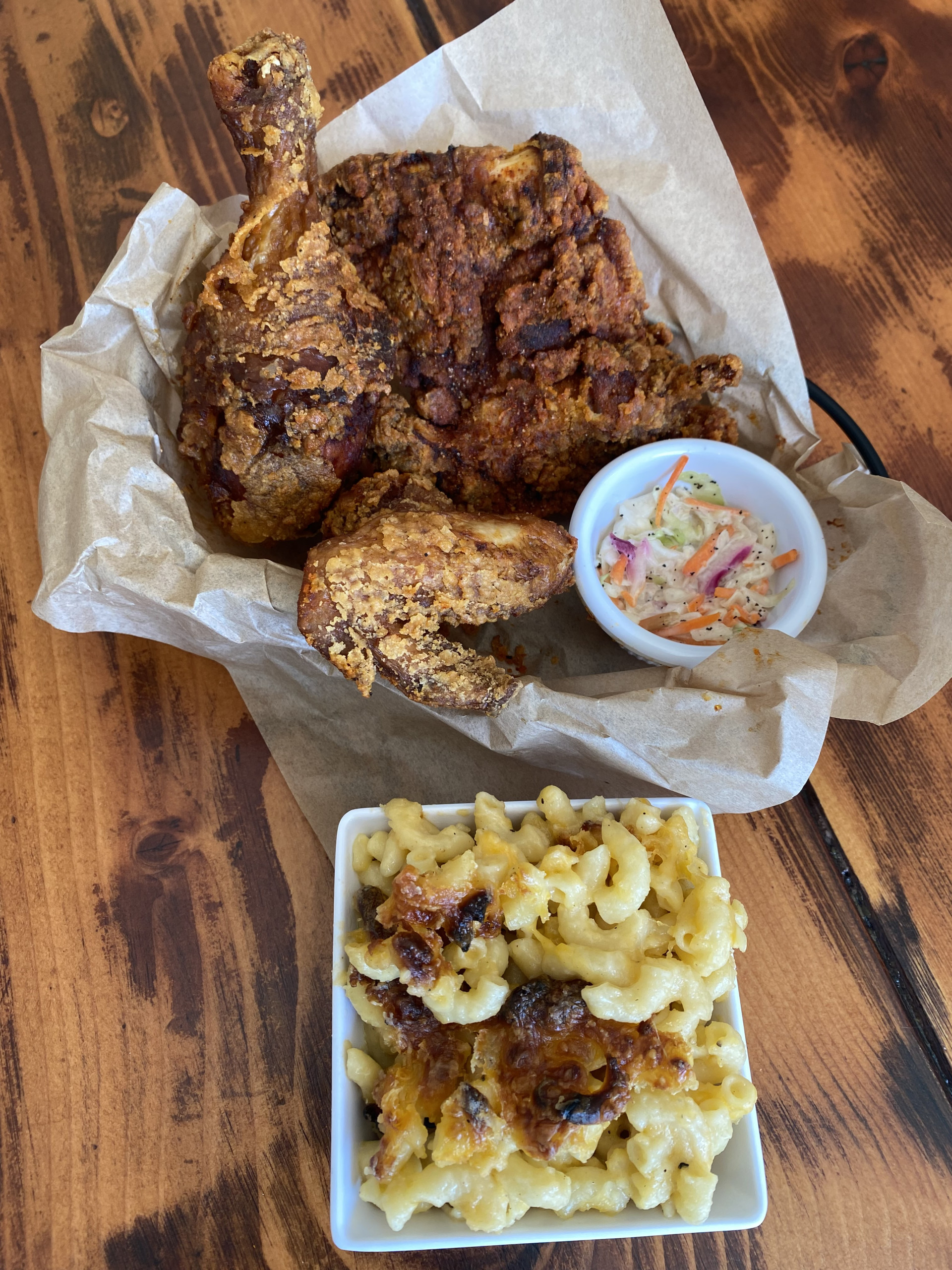 At Doro Bet, you can find that same alicha chicken Kane made for her kids, now finessed for and available to the non-offspring masses. Kane and the team buy their birds from a halal distributor in Jersey — these arrive generally on the smaller side and they’re already broken-down to save on prep time. Then, the chicken marinates in salt, turmeric, black pepper, black cardamom, and an undisclosed amount of lemon juice (from taste alone, I’m guessing it’s an obscene amount). After two days, the bird is ready for a quick skinny dip into buttermilk before being dredged in a mixture of teff flour and tapioca flour. Kane tells me the dredge is key, since it keeps everything that touches Doro Bet’s fryer gluten-free. The addition of tapioca flour also allows the dredge to adhere to the chicken better than a teff-only dredge would. Once an order comes out of the fryer, the team shakes a final dusting of black pepper, turmeric and lemon zest on top. The result is thin, crackling skin, buttermilk-soaked dark meat inside, and an encore of crystalized salt pops and lemon zings.

The word “alicha” literally translates to “mild,” but don’t confuse mild with bland. The truth is that Doro Bet’s alicha fried chicken is even more memorable than its berbere-spiced counterpart. Maybe because Philly’s spicy chicken market is well-established, with very good varieties available at Korean fast-casual chains or neighborhood restaurants like Asad’s in the Northeast and Ember & Ash in East Passyunk. But the star power of Doro Bet’s alicha version has nothing to do with spice (or a lack thereof), and everything to do with the balance of tartness and fat. A combination so striking it’ll make you think twice before automatically opting for spicy chicken the next time you see it listed on a menu.

Kane admits she wants every meal in her path to pack ample heat: “I’m that person who walks around with hot sauce in her purse, but [the alicha version] made me realize that not everything needs to be hot and spicy for it to be good. Like if it’s well-seasoned and well-prepared, it can be good. And it’s my kids’ favorite.” Those kids have excellent taste, and we’re all better off for it.

What: Alicha fried chicken (ideally with a side of collards and fries)