A famed Brooklyn pizza joint arrived in a town already filled with good pies. But its sense of nostalgia makes you feel right at home. 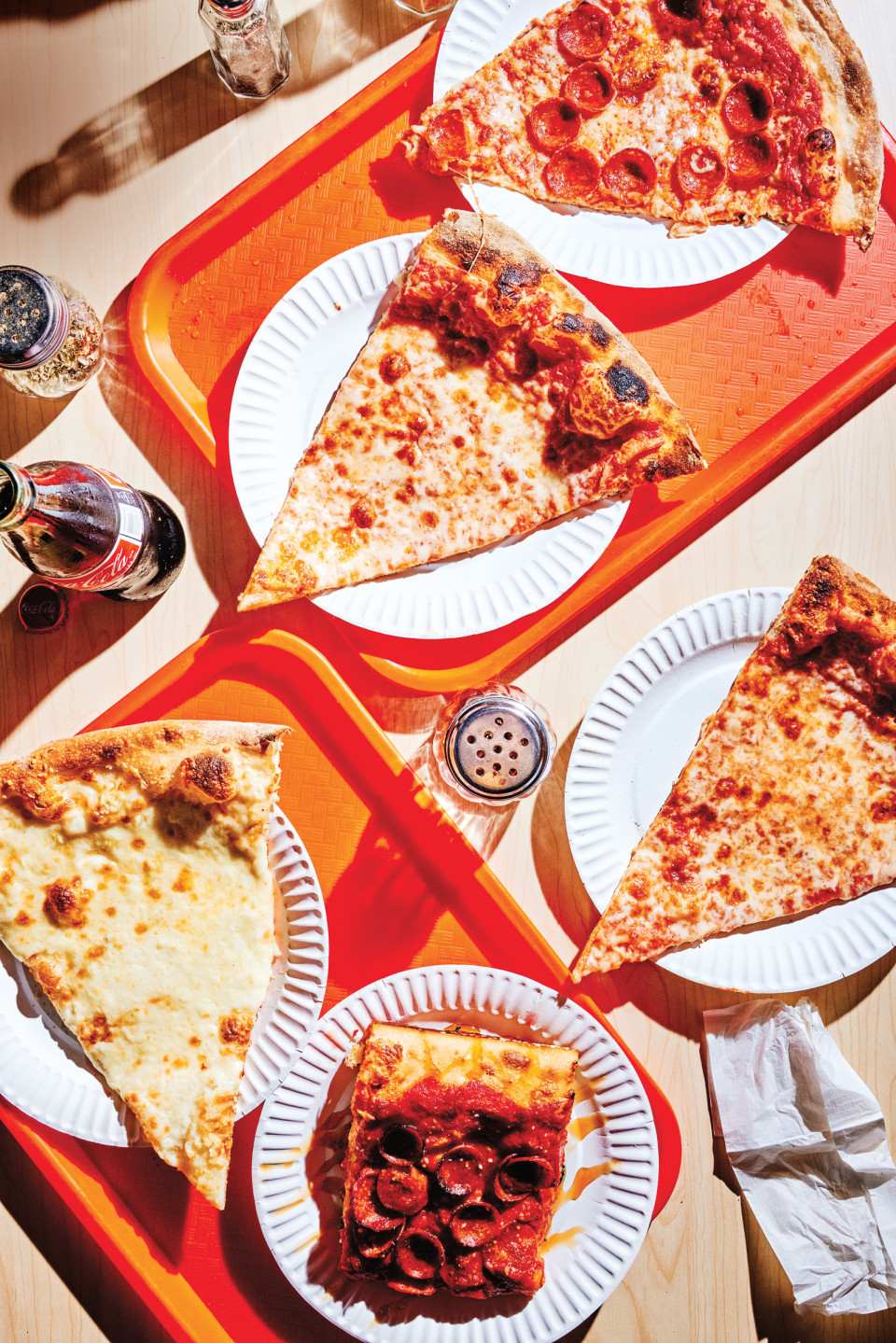 I did not anticipate how much I was going to enjoy Paulie Gee’s.

How could I? The new slice shop, opened at 13th and Waverly under green marquee letters spelling out PIZZERIA, can feel to the uninitiated like just another vibes-over-substance adventure in intentional nostalgia. A transplant from Greenpoint, Brooklyn (with locations already in Chicago, Baltimore, Columbus and elsewhere), trying to horn in on this city’s well-established pizza scene. A new kid in town, with all its carpetbagger swagger, trying to sell us something we already have by telling us we don’t.

Order This: A slice of the Mootz, a Hellboy, and Bowie’s Let’s Dance on vinyl.

I should have hated it. I was ready to hate it. I expected to walk in, eat a bite, dismiss it, disparage it for your amusement, and never think about the place again. That was the plan.

I did not expect to fall in love.

Know what got me? The sound of an orange plastic tray hitting a cheap laminate table. A sound that, for years of my young life, meant food was here — that lunch or dinner was being served. That sound I heard at every cheap buffet and sandwich shop, at a hundred McDonald’s dinners and every Pizza Thursday in middle school. That bang, so perfectly replicated here by just the right tray hitting just the right cheap and artless table at just the right angle, was enough to lift me free of 2022, float me down the timeline, and drop a grown-ass man back at Ponderosa in 1985, sitting across from my mom, eating only the soft things from the salad bar because I’d just gotten my braces tightened. 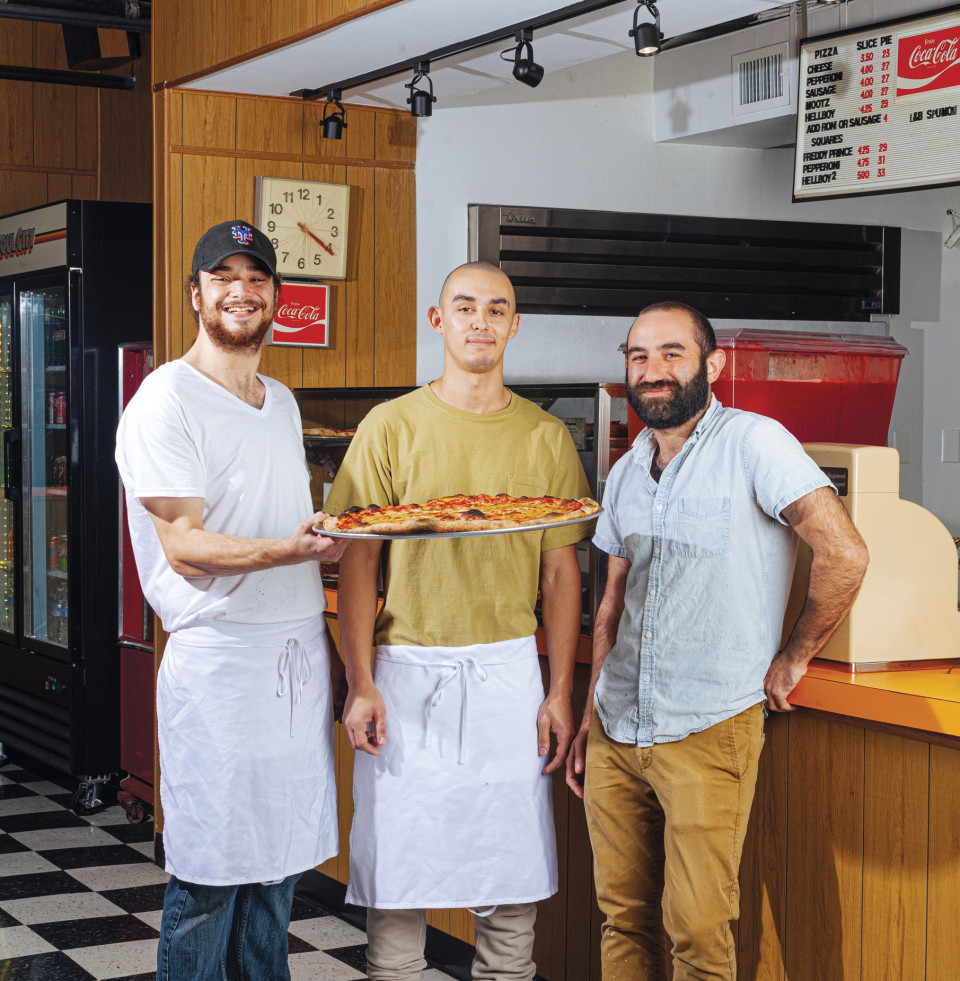 It was tenuous, that spell. Almost anything could have broken it — a wrong voice, a wrong song on the playlist, a color or a smell, a prop out of place. But nothing did. First time through Paulie Gee’s Soul City Slice Shop, I ate in a fog of narcotic nostalgia, drinking fruit punch from a machine out of a waxy cup and eating a cheese slice that was a simulacrum of everything you remember being great about cheap pizza (the crisp crust, the fold, the drooping point, the stretching cheese) translated into a slice that actually is great, that transmogrifies, atom by atom, the comforting feel of those bygone everyday neighborhood slices into something that tastes even better than you recall and boldly supplants all nitpickery about leoparding, crust hydration, and the pizzaiolo-as-mad-scientist, thanks to simple clarity.

The second visit had the same magic. It was Labor Day weekend, and I hit the place during a lull, slid up to the counter, ordered two slices, and sat. I ate a slice of the Mootz — no sauce, fresh mozzarella stretchy and hot from the oven, and heavy on the minced garlic in a way that guaranteed my safety from any vampires. The owner of the original Paulie Gee’s, Paul Giannone, cut his teeth doing backyard pies in a homemade oven, teaching himself (and his son, Derek, who runs the Philly shop) to develop slices with thin crusts that get their crispness from a double bake (whole pies, sitting under glass in the case, broken down into triangles that get a second turn through the big deck ovens) and simple toppings that don’t overwhelm. The pepperoni cups curl in the oven, their flavor carrying against the weight of the bread and cheese. The Hellboy is just that same pepperoni slice drizzled with Mike’s Hot Honey. The sweet-heat combo is a knockout every time. 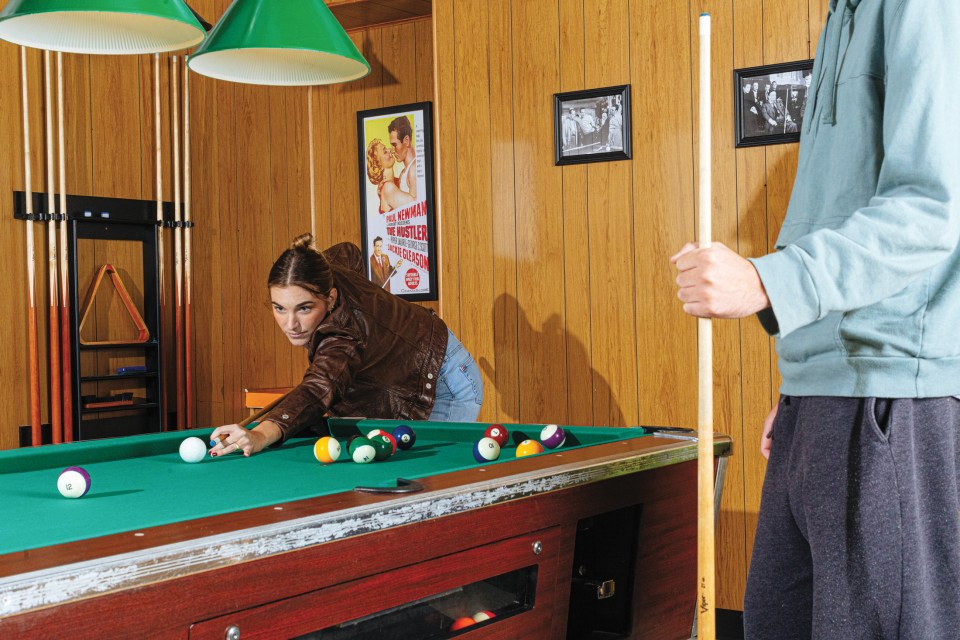 A game of pool heats up / Photograph by Bre Furlong

In the back, there were a few people smacking balls around on the pool table that (I’ve heard) attracts the local sharks on weekend nights. I watched the Atari 2600 hooked up to the cabinet TV cycle through the waiting screen of an old tennis game and thought about moving to the bar (where they’ll tighten up your fruit punch with a shot of something if you ask them nice). But while I ate, the ’tender was busy futzing with the playlist, angry that someone had included a song made in 1981 on a ’70s list that was heavy on soul, Zeppelin, and Rush doing “Fly By Night.” That was important work, and I didn’t want to interrupt.

When I was done eating — once I’d sucked my fruit punch down to the rocks and spent more time than was reasonable flipping through the vintage Yes and Todd Rundgren vinyls for sale in bins against the wall — I was actually pissed that I had to leave. I missed the place before I’d even made it to the door. And I get that this whole thing is a put-on: that Paulie Gee’s exists as a kind of Gen X panic bunker, a nostalgia delivery system for a generation facing down AARP newsletters and cholesterol medication. But it’s a good put-on.

And all I really wanted to do was stay. 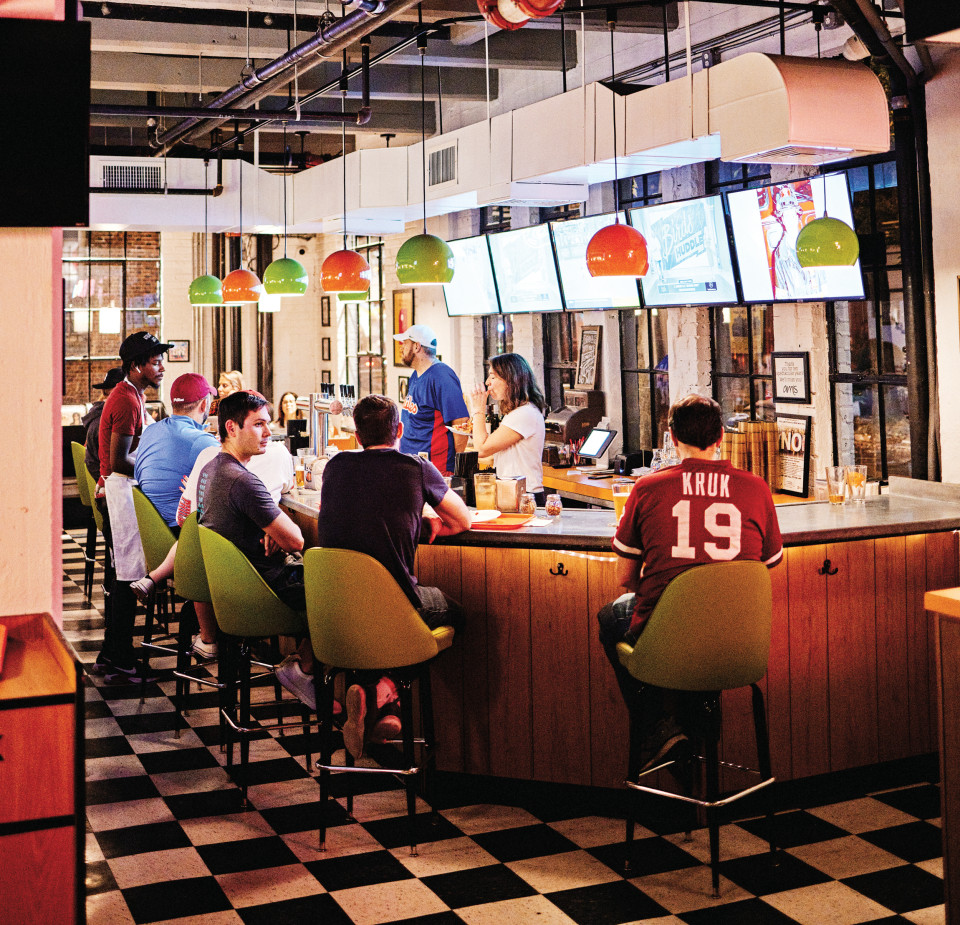 Slices at the bar / Photograph by Ted Nghiem

Published as “Not Prepared for Love” in the November 2022 issue of Philadelphia magazine.