Ritz Crackers! Girl Scout cookies! Fig Newtons! The local baking legends behind some of the nation’s most iconic snacks. 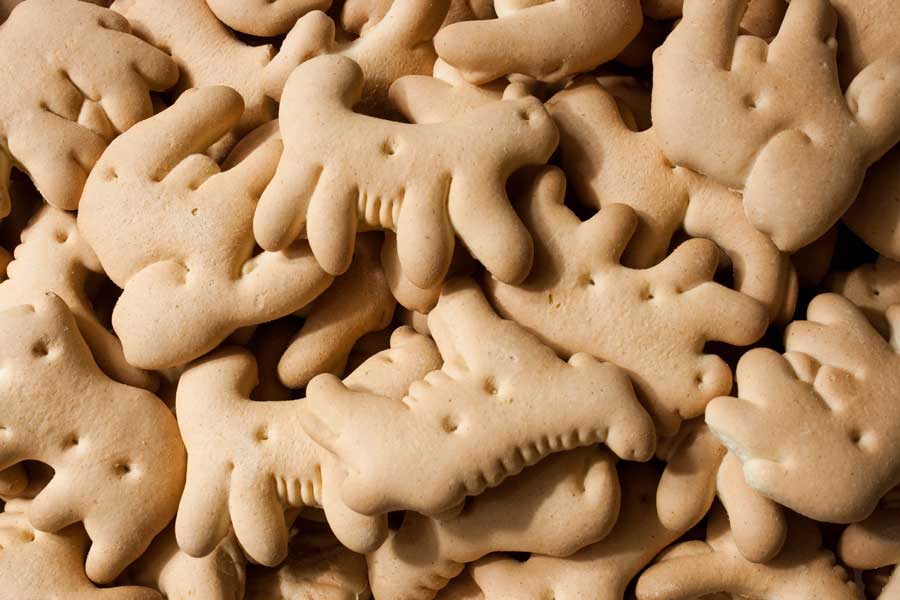 Philly isn’t just about the history of America. This city has also been a hotbed of commercial baking innovation, with locals contributing to the creation of all sorts of tasty snacks now known around the world — and one now-vanished but much-lamented specialty. Get ready, ’cause it’s crunch time!

Back in the day, Philly was the Oyster Capital of the World — there were more than 300 oyster houses in the city in the early 20th century. And whether you were at Old Original Bookbinder’s in Old City or the Center City Bookbinders, OTC was there: rock-hard little nuggets of not much more than flour and water and salt. There was usually a tall glass urn full of the things at the bar where you waited for your table, and there were more when you got to that table, along with a little glass dish of horseradish. You used the ceramic spoon to slather some horseradish atop a cracker, then bit into it, praying that your teeth survived the encounter. Then you tossed a few of the ping-pong-ball-shaped crackers into your stew, where they gradually softened — up to a point.

OTC crackers were the brainchild of a British immigrant who sold them door-to-door from a wagon; Union soldiers snacked on the crackers during the Civil War. Made in Trenton by the Old Trenton Cracker (see? OTC) Company, they were strictly a regional specialty, with 80 percent of sales in the Philly area. Alas, times change, and in the mid-2010s, the baker that made the crackers dropped the brand. A substitute was found, but its version was — gad! — rectangular, not orbital, and customers at the city’s few remaining oyster houses were appalled. (“You sometimes don’t realize how passionate people are until you change something,” Sam Mink, owner of the Oyster Bar, told the Inquirer in 2019.) When we were growing up, there was always a bag of OTC crackers in the snack drawer — probably because our mom could count on them being the one food none of us kids would willingly gorge on. Still, we’re sad they’re gone.

This is another of those foods that are so ubiquitous here in our hometown that you just sort of assume they exist elsewhere. Not so. Sweetzels, headquartered in Flourtown, is strictly a regional bakery, and even its president admits that the name of his specialty can be confusing beyond our environs. “Outside the area, they really don’t know what a spiced wafer is,” Rob Borzillo told the Chestnut Hill Local earlier this year. The company is redesigning that iconic orange-and-black box for a planned rollout beyond the region starting in August. Incidentally, Sweetzels makes Lemon Drops and a perniciously delicious little Mini Ginger Creme sandwich cookie, both of which we find superior to the pumpkin-spice-latte-esque original. But maybe that’s just us.

Chester A. Asher was a down-home Canadian farm boy when he began his candy company in downtown Philly in 1892. It grew like topsy, partly by supplying the fancy candy counters that every department store had back then. Chester’s four sons took over the business in the wake of World War II, followed by two grandsons, Jack and Bob, the latter of Republican fund-raising fame. That’s a pity, because the pretzels — they come slathered in dark, milk or white chocolate, adorned with sprinkles, nuts, toffee chips, etc. — are scrumptious. Every now and again, we get the urge to say, “Hey! Politics be damned! Pass us those pretzels!” Today, the Asher’s plant is in Souderton.

Shirley Temple or no Shirley Temple, we’d never put animal crackers in our soup, because they’re really not crackers; they’re cookies. Thanks to the Industrial Revolution, British bakers were able to create what they deludedly call “biscuits” (they, too, were cookies) in fancy shapes. Philly baker Walter G. Wilson took advantage of the new tech to make “Zoologicals,” a.k.a. petite animal-shaped crackers, which he sold at the Centennial Exposition here in town in 1876. The National Biscuit Company, which later morphed into Nabisco, first offered its version of animal crackers in 1902 and later introduced the familiar P.T. Barnum circus box, designed by artist Sydney S. Stern, who studied in Philly at the Pennsylvania Academy of the Fine Arts. It changed remarkably little over the years until in 2018, the bars were removed from the animals’ cages after protests from PETA. Stern also designed the classic packaging for Ritz Crackers. Speaking of which … 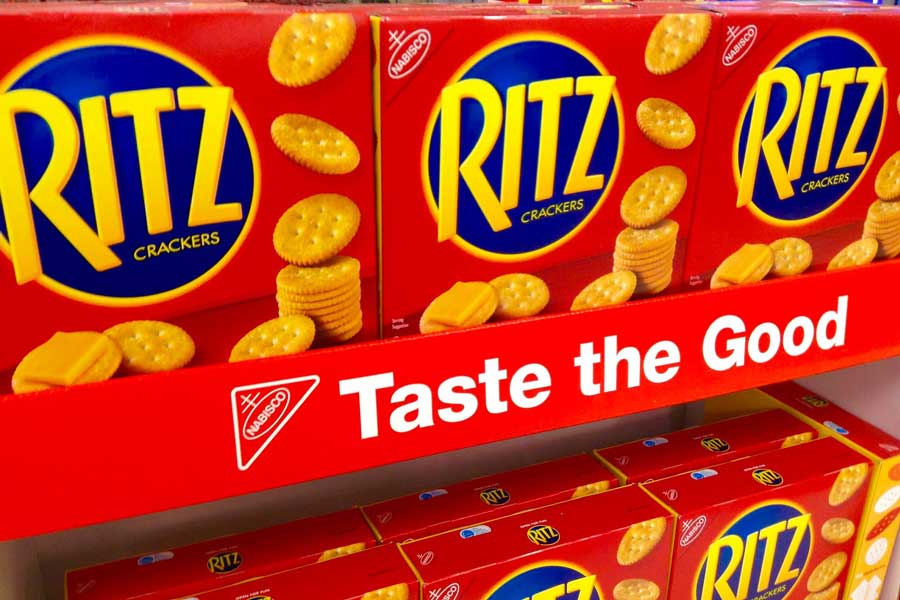 In 1934, in the midst of the Great Depression, Nabisco introduced the Ritz Cracker, named for the posh Ritz-Carlton Hotel in New York City and intended to evoke elegance and refinement. It was first baked in the company’s North Philadelphia plant and marketed here and in Baltimore as “a small taste of luxury.” By the following year, Ritz Crackers were available nationwide; within three years, the buttery cheese and/or peanut butter conveyances were the most popular crackers in the world. According to William Cahn, author of a treatise on the history of crackers,  boxes of Ritz were once presented by European swains to their sweethearts the way American boys proffered boxes of candy.

There’s, um, a lot of argument about the name of this regional treat. Does “AP” stand for “all-purpose” cake? Or for Ann Page, the symbol of the A&P grocery chain? Is it “AP”? “Apee”? “Apie”? Maybe an elision of “a pie cake,” since it’s typically baked in a pie tin? Whatever you call it, the simple, plain cake, like a dressed-down shoo-fly pie, seems to have its origins among the Pennsylvania Dutch in our area. That’s all we’ll say; we’re not going to argue over it. 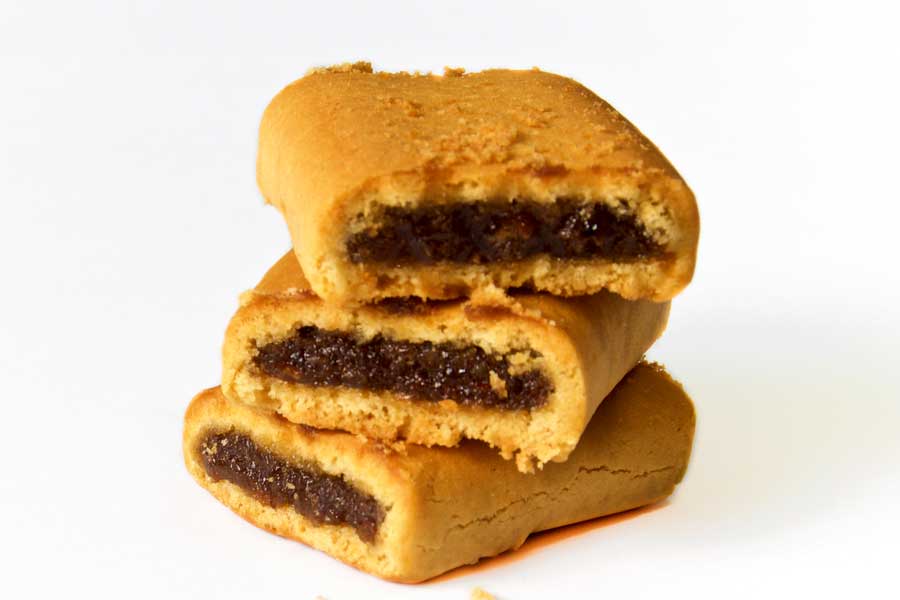 In 2012, Nabisco announced that its “fig cake,” introduced in 1891 and named for a Massachusetts town (the Newton part, not the Fig), would henceforth be known only as “Newtons,” since the company had been making alternate flavors — strawberry, apple cinnamon, raspberry, mixed berry — for years. And figs aren’t a particularly popular fruit among young cookie eaters, despite the Biblical connections they have. As it turns out, the man who made the Fig Newton possible, a guy named Charlie Roser, worked in a Philadelphia bakery in the 1890s and sold his recipe for a stuffed fig cake to the Kennedy Biscuit company, headquartered in Boston (thus the Newton name). A Floridian, James Henry Mitchell, invented the machine that permitted mass production of the treats by inserting the fig jam inside an extruded pastry tube. Not our favorite cookie, thanks. 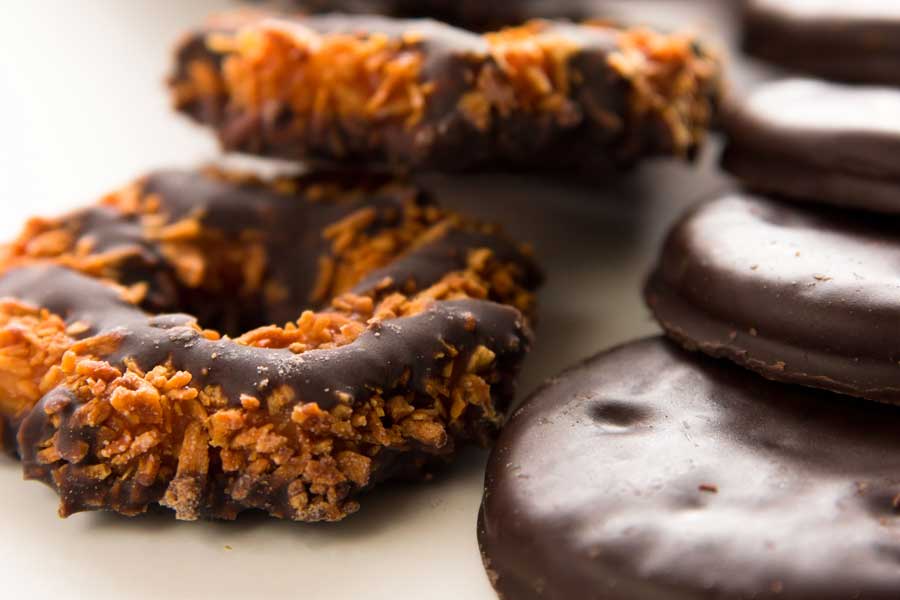 Now we’re talking! While credit for the concept of troop cookie sales may lie elsewhere — the Girl Scouts organization cites Muskogee, Oklahoma — it was the Philadelphia Girl Scout council’s brainstorm to bake and sell cookies in the display window of the city’s gas and electric company at Broad and Arch in 1932. (Gas! Electricity! Ovens! Get it?) The following year, the Scouts enlisted the local Keebler Company to bake and package boxes of trefoil-shaped shortbread cookies to be sold door-to-door. Sales were wildly successful, and the program went nationwide in 1936. The most popular variety by far is the Thin Mints, which shows how weird people are, because Samoas rule.