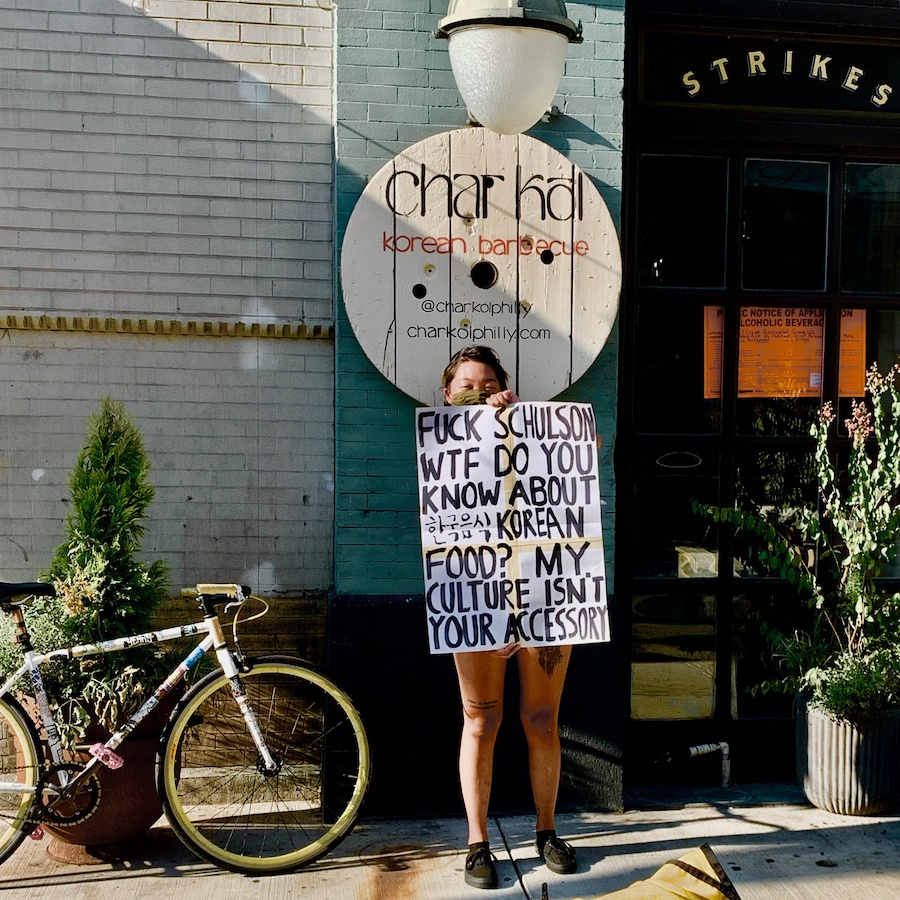 There was so much intentionality, there were so many decisions made, in the weeks and days leading up to the launch of Char Kol, Michael Schulson and Nina Tinari’s outdoor Korean BBQ pop-up in Center City. I know this because we’re still stuck in this pandemic, and every decision, big and small, matters for the survival of your business. There was the decision to not expand Harp & Crown or Giuseppe & Sons into the parklet outside those restaurants on Sansom Street. This very well could have happened, and nobody would have batted an eye. But Schulson and Tinari went with a new concept entirely — which was a choice. They went with a Korean BBQ concept — which was a choice. There was the decision to enlist a non-Korean chef (who comes to Philly with some David Chang cred, sure) to head a decidedly Korean concept, and the decision to wedge Japanese foods like gyoza onto a Korean menu that already features mandu. There was the choice of decor — the Sapporo-branded umbrellas, the cherry-blossom-patterned paper lanterns. The group probably spent an entire day naming the Korean-inspired cocktails; one, “Silk Road,” takes its moniker from an ancient trade route that went only as far east as China.

But the decision to name the pop-up itself “Char Kol” stood out to me most. It’s a subtle choice, harmless on its face. But as far as I know, there’s no innuendo, no double entendre. I understand that it comes from the decision to use charcoal, instead of gas, to power the tabletop grills, but to be honest, that seems like a choice born of necessity and convenience. (Outfitting each table with its own propane tank seems both costly and a safety risk.) But the decision to caricaturize the word, to make it two words and less … English for no reason other than some vaguely non-American mystique, is most telling of the restaurant’s motive and creation. Char Kol is the physical manifestation of a food trend, respect to the culture it banks on be damned.

Online, the opening got some pushback. (Scroll through the comments on the pop-up’s Instagram page to see for yourself.) Yesterday, Hemi Park, a Korean American and former restaurant worker in Philly, stood outside Char Kol with a sign that read, among other things, MY CULTURE ISN’T YOUR ACCESSORY. In a phone interview, she says, “How do you mess up this badly? White people making Asian food isn’t anything new, but this specific concept is especially inappropriate and confusing because this place doesn’t seem to honor tradition or innovation. You usually open a restaurant like this and pick a lane: authentic or innovative. But they’re playing it straight down the middle. It’s not authentic at all; it’s not executed to amplify well-made traditional or modern Korean food close to its authentic form. But it’s not very creative or innovative, either — just watered-down Korean food for white comfort and white taste buds.”

It’s clear that despite its immense success as a restaurant empire, the Schulson Collective doesn’t seem to understand the world it operates in anymore. (Schulson and Tinari didn’t reply to a request for comment.)

I assume this is because Schulson himself is very much a product of the generation of foodie-ism (I and much of the Philly food media included) that venerated and empowered white chefs and owners above all else for so many years. He made a name for himself at Stephen Starr’s Buddakan, a restaurant that is, by today’s standards, a culturally appropriative nightmare, then went on to launch his own empire filled with Asian-fusion-y darlings — Sampan: Home of the Edamame Dumpling chief among them. With all the leverage and power bestowed upon him by the ’00s-era restaurant culture and a business model that replicates — almost to a tee — a Starr Restaurants model that relies on big-box, big-production atmospheric dining, Schulson, along with Tinari, has found great success in this town.

But some of the secrets to their success feel still very much stuck in that era. It’s impossible to talk about food trends without talking about their origins. And it’s impossible to talk about restaurants without talking about their predilection for appropriative behavior — behavior that’s long contributed to great monetary success for some at the expense of the ostracized and marginalized. Yet somehow, Schulson and Tinari persist.

That’s not to say there are clear answers to all this. I’m not sure I’m comfortable living in a world where people aren’t fully free to cook the food and amplify the cuisines that interest them, no matter where they’re from. But I know that doing so comes with some responsibility to give agency and voice and power to the people and communities you’re profiting from. Schulson and Tinari certainly aren’t opposed to partnership and collaboration. I wonder what Char Kol might have looked and tasted and felt like if a Korean chef or partner was calling some of the shots.

A post shared by Schulson Collective (@schulsoncollective) on Aug 5, 2020 at 6:56am PDT

“I had a really hard time assimilating at school in the U.S., and Korean food was one thing that brought me so much comfort,” says Park. “But I realized that to make white friends in my predominantly white town, I had to give up Korean food, because it was simply ‘too disgusting’ and ‘stinky’ and ‘weird.’ I felt like I was raised to hate Korean food, but it wasn’t until I started working at restaurants that I saw that kimchi was, all of a sudden, very cool. And that gochuchang was this ‘crazy’ ingredient, and that people worship persimmons every winter, and that people love to talk about fermentation. It was very disorienting. And to see the same white people who gave me a hard time about being Korean now taking advantage of and profiting off my culture and food in this manner without employing Korean staffers — it feels like I’ve been robbed of my background. It feels like Korean food is only cool when white people do it, but when we do it, it’s not cool. It’s not trendy.”

One of the most powerful weapons in the Schulson Collective arsenal is its ability to identify trends — be it a dish, a style of plating, a type of service or a full-on cuisine — and then erect buildings around them. If nothing else, the collective scrutiny of cultural appropriation is the most popular movement to come out of the food world since farm-to-table.

Which means that this piece right here is, was, inevitable. Why the Schulson Collective didn’t see it coming — the same way they saw sushi, and red gravy, and secret bowling alleys — is beyond me.