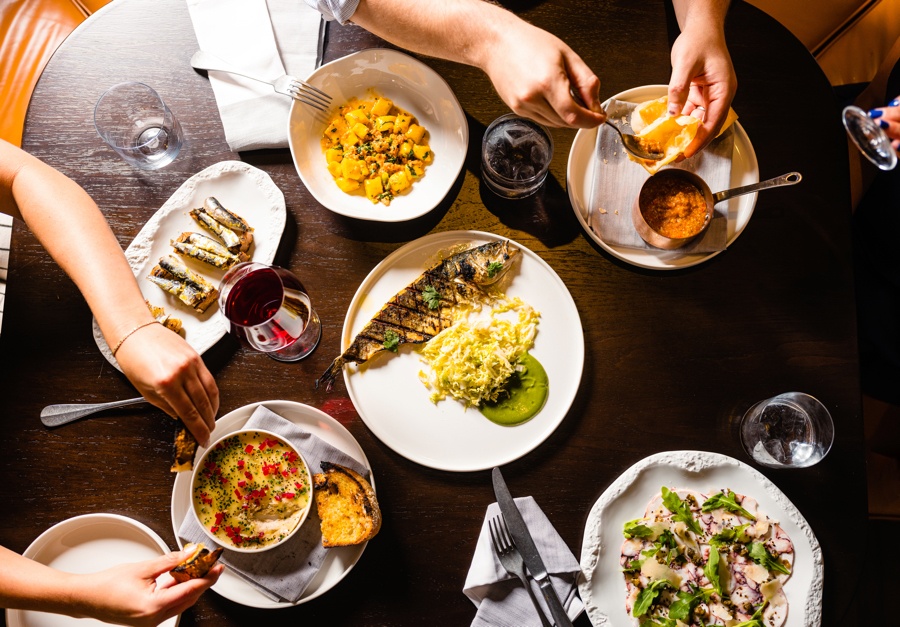 This review originally appeared in print alongside our Jean-Georges Philadelphia review. Read the Jean-Georges review here.

There’s no elevator ride at Vernick Fish. No waterfalls. No skyline view out 40-foot-high windows. But Greg Vernick has something better. He’s got a new guy selling him scallops.

Order This: Scallops (of course), the bluefish rillettes, clam ragout, and literally any of the larger plates.

Sitting at the kitchen counter at his beautiful new spot 59 floors down from Jean-Georges in the new Comcast building, he tells me all about how the company gets the scallops from New Jersey; how it’s tough for them to sell to other kitchens because these Jersey scallops come in inconsistent sizes; how that didn’t matter at all to him because he was planning on using them in a tartare anyway. Chopped into bits, mixed with a black truffle vinaigrette and oil, and served with gaufrette potato chips on the side.

I don’t really eat scallops anymore. Not because I don’t like them, but because scallop dishes have pretty much sucked for the past decade. Good for little but the quick sear, a smooth sauce, and the artful sprig laid on top. 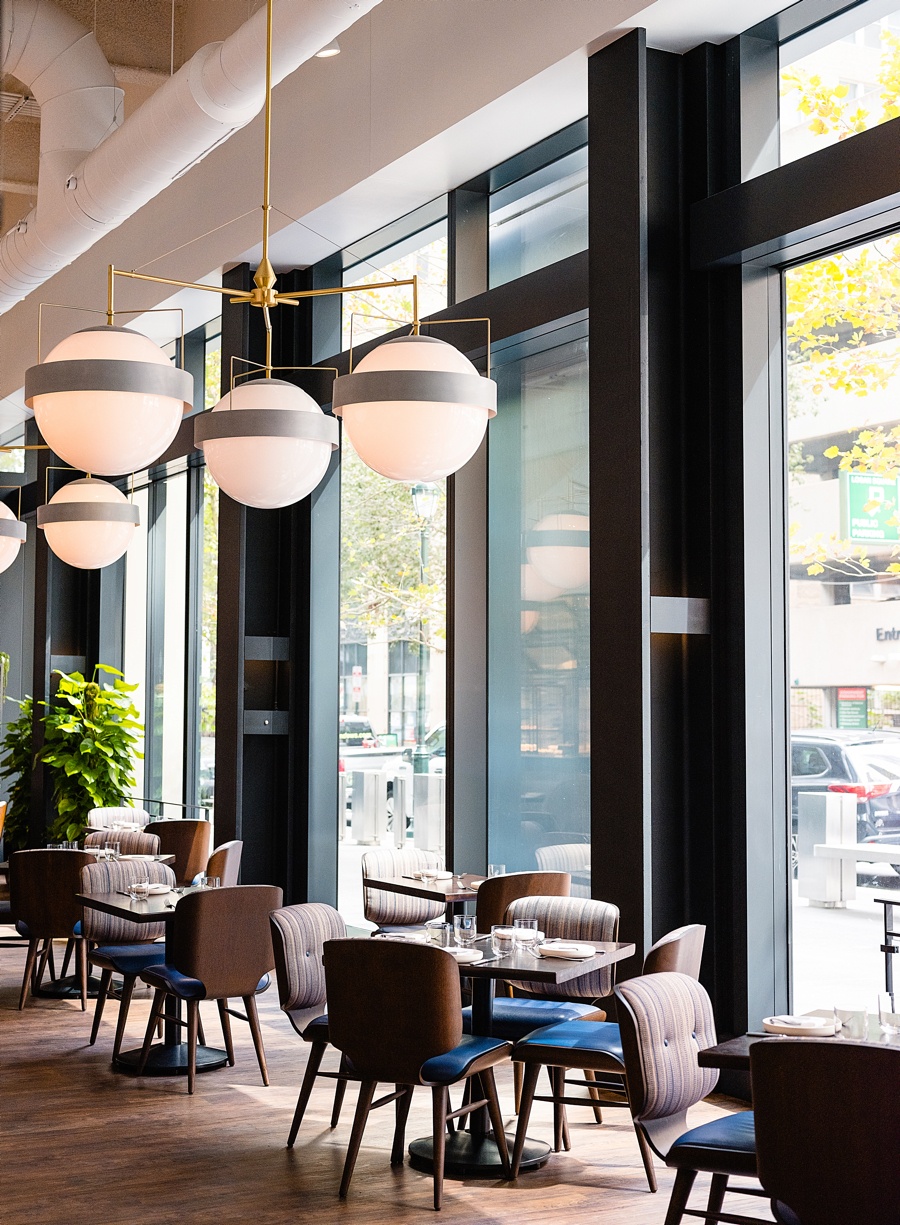 The dining room at Vernick Fish | Photo by Ted Nghiem

But not these. Vernick insists I try them, and I do — scooping up the irregular chunks of perfect white flesh on lightly salted waffle chips. The meat is buttery and soft, faintly briny. It tastes (finally) like scallops used to before they became little more than exhausted culinary shorthand for laziness. And the amount of care that has gone into the execution of this single plate is both stunning and absolutely in keeping with the way Vernick and his crew prepare every plate.

The raw sea bream comes cut like sashimi, every piece capped with a perfect dome of melon and a stick of dried prosciutto so that each looks like an egg, sunny-side-up, with a piece of bacon balanced on the yolk. The smoked bluefish rillette is served chilled in a shallow dish under a cap of fat scattered with pickled red onions — so delicious that I want seconds before I’m done with my firsts. The kitchen does “Oysters Philadelphia” with tongue firmly in cheek (broccoli rabe pesto, Genoa salami, a round of crisp bread); homemade mafalde with lump crab and tomatoes (Vernick’s take on crab spaghetti); a clam ragout that you can stuff in the hollow hearts of fresh beignets; and a Pocono river trout that Vernick keeps on the menu just because he loves it. Because he says people don’t eat enough river fish these days. And really, they don’t. 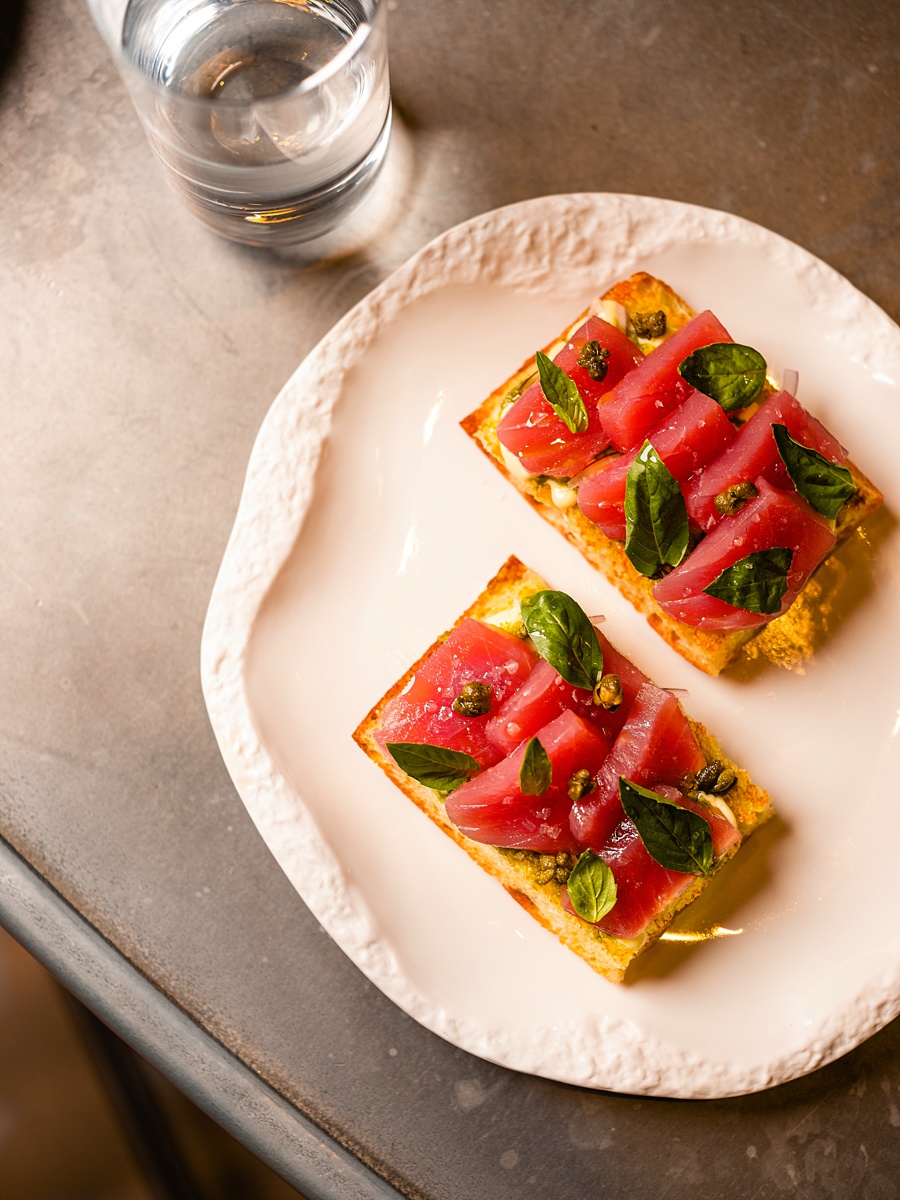 So where Jean-Georges suffers somewhat for having a menu that’s essentially a loose autobiography of a career that’s taken its namesake everywhere, Greg Vernick’s is more focused and fun. Vernick Fish is a Jersey Shore restaurant. It’s sun-drenched and salty, and it ends with sticky fingers and a sweet final taste when you unwrap the piece of saltwater taffy that arrives with the final bill. It may not have the view that Jean-Georges does, but it has vision.

And in this sparkling new skyscraper, that makes all the difference.