I wish I'd never heard of Philip Korshak. 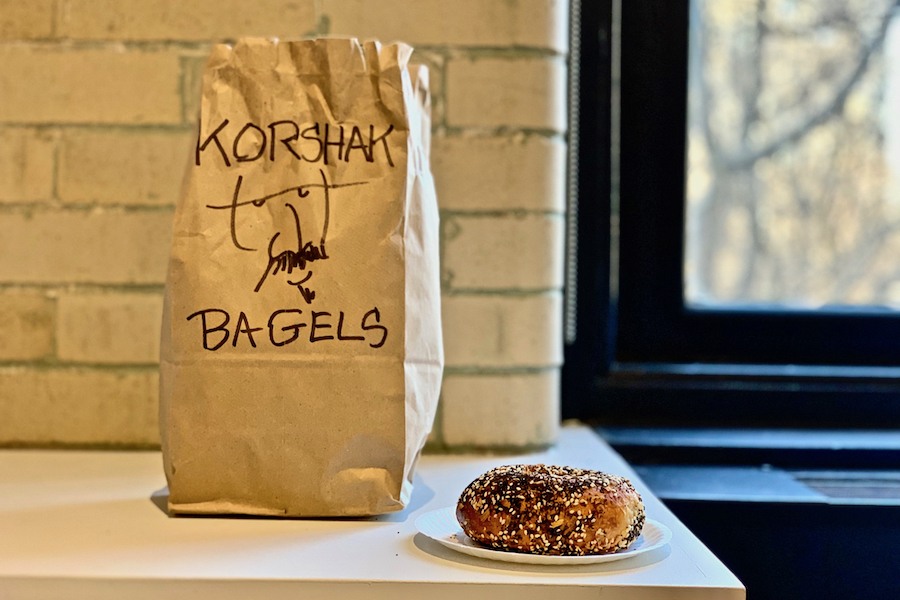 I picked up my bagels at Angelo’s Pizzeria. Walked right in at 9 a.m., well before they opened for lunch. The owner, Danny, was in back fiddling around in the kitchen. When I told him I was there to pick up my bagels, he shouted down to the basement, “Hey, Phil! Someone’s here to see you!”

And out came Philip Korshak, a man with a big, straggly beard, a beanie high up on his head, and a zip-up hoodie covered in flour. He smiled, handed me my paper bag filled with everything spiced bagels, we said our hellos and goodbyes, and off I went, completely unsuspecting of the rift in time that would form later that morning, when I finally ate one of his bagels.

You’ll learn all about that rift, too, don’t worry. You’ll get used to the feeling of knowing that there was a Before and that now there’s an After — the great bagels that came before you ate Philip Korshak’s bagels, and the feeling of being underwhelmed by all other bagels after you eat Philip Korshak’s bagels. Or you might find comfort in simply refusing to acknowledge them as being bagels so you can continue on your bagel eating journey in peace.

That’s what I did: I’ve decided that Philip Korshak’s bagels aren’t bagels at all. They’re tiny baguettes curled into circles. Savory sourdough doughnuts. The crust is so crispy, it might as well be deep-fried. So, you know what? I’ve decided that they’re deep fried (even though they’re not), because bagels aren’t deep-fried, and these are not bagels. Its flesh is somehow both fluffy and chewy. The bagels are spiced both on top and on the bottom, as all bagels ought to be spiced. But no, these are not bagels, because if they are bagels, that means I’ll have to stop eating all other bagels. And who wants to stop eating bagels?

Philip Korshak arrived in Philly seemingly out of nowhere. He says he lived in Brooklyn for a decade. Met his wife, Kendra, there in the early ’90s. “Every Sunday, I’d wake up in Brooklyn to get bagels and coffee. But then we moved to Austin, Texas where she was going to film school … and Austin was great and everything, but there are no bagels in that town,” he says. And because scarcity often begets innovation, Korshak took it upon himself to start making bagels.

He worked at Home Slice Pizza in Austin, Texas for a bit. Managed the shop there, helped put out what many consider to be some of the best slices in the city. Home Slice is where he says he started getting serious about dough:

“I started studying dough structure, gluten, the chemistry of it, and I became enamored by the exact science and sorcery. If you lean too heavily either way, you become too dogmatic in your process and lose the soul of dough. It’s a living thing. If you play it by the seat of your pants and punk rock it all the way, it’s great but doesn’t have staying power. It can’t succeed in a way that’s constantly gratifying. It can’t evolve. You have to be present with your dough. Stuff like that became really fascinating to me, what you can control and can’t control. The process, in my mind, is orchestral.”

Philip Korshak’s Instagram handle is @korshak.bagels.poetry. The “poetry” part only made sense to me after speaking with him (see above) about his bagels. “Before I was making bagels out of a pizza shop, I was working dough. Before that, I was operating a huge pizza operation. Before that, I was a fancy ex-student with a predilection for modern poetry. I developed a problem with the poet Ezra Pound. I can go on about how modern poetry and baking are very similar. From deconstruction to specific ideas. They approach life and art as complementary.”

He moved to Minnesota after Austin, and then to Philly’s Italian Market last summer. “The entire time I’ve been here, I’ve been thinking about opening a bagel shop,” he says, “because of my affection for those days in Brooklyn and the sweet feelings of what’s possible for me and Kendra and, you know, family things. The more people who are turned onto my bagels, the better. If you get 100 people clapping at the same time, hoping this guy gets a spot, that’s one ulterior motive, but I’m going to make bagels no matter what — whether they’re for human beings or not. The process of making dough is intrinsically meditative for me. I could put Helen in the fridge, but fuck that, she’s too lively, she’s too good.”

Helen, by the way, is the name of his sourdough starter. Full name: Helen Mirren.

If you want some of his bagels, DM him on Instagram. He’s selling them out of Angelo’s Pizzeria (736 South 9th Street) for $10 per half-dozen. It’s a one-man operation, but he’ll do what he can to accommodate everyone.

Hopefully, they don’t ruin all other bagels for you, too.