Home runs are great. Your hair is beautiful. The cleats and t-shirt were cool and all. But what Philly really wants are pictures of what you're eating. 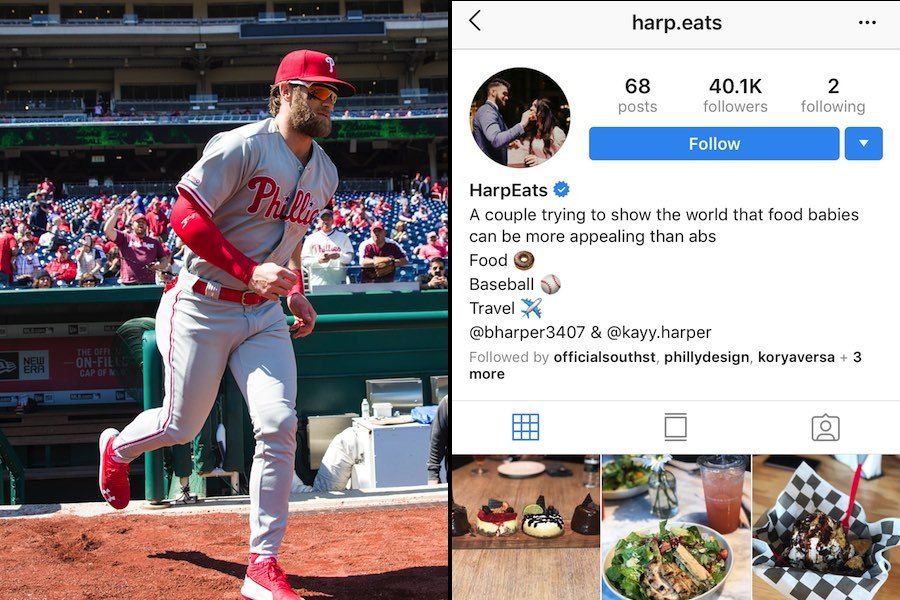 If you’re a Phillies fan and also an Instagrammer, you’ve probably followed Bryce Harper on Instagram over at @BryceHarper3.

There, his 1.6 million followers have recently been treated to photos of his rather voluminous hair, photos of him ringing the bell at the Sixers game, and a cute pregnancy-announcement photo.

You see, there’s also a Bryce Harper food Instagram account. It’s called, appropriately, @Harp.Eats, and it has some 40,000 followers.

The difference, of course, is that nobody really cares about the photo your friend took of the gorgeous Swiss chard pie at Pizzeria Beddia last night, but we’re pretty sure that if Harper posts a photo of a crumb from Beddia’s crust, the city would go wild. It would be, forgive us, a grand slam in the food Instagram world.

So what gives, Bryce?

Granted, you’ve been a little busy. But you’ve made it quite clear that you have been eating out in Philly, telling Inquirer sportswriter Scott Lauber of your time here thus far, “Restaurant-wise, I’m 7-for-7.”

Philadelphia has already accepted you in a way that few outsiders with compensation packages such as yours have been accepted. It’s remarkable. You are loved. You are cheered. But if you want to be a true American hero to us here in Philadelphia, we want more. We need your food. Every morsel.