Plus, we got her to tell us whether a server deserves a 20-percent tip for opening a $500 bottle. 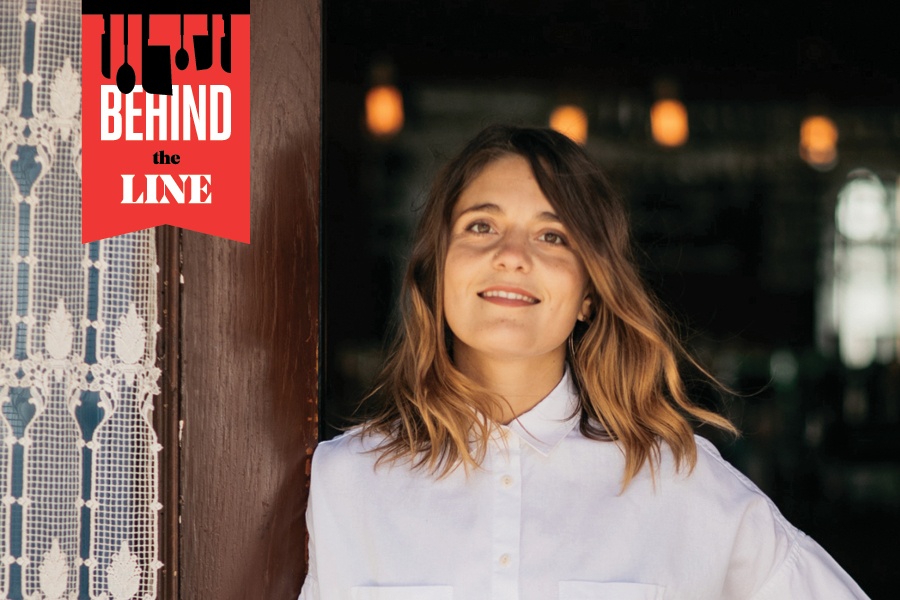 With Philly Wine Week set to kick off this weekend, we sat down with Good King Tavern owner Chloé Grigri — one of the festival’s organizers — who knows way more about wine than most people.

My full name is… just Chloé Grigri, pronounced gree-gree. Same thing twice. I’m half French. I have an uncle really into researching ancestral history, and he tracked it back to “Gregory” in Russia and then our ancestors emigrated to Spain and were then chased out by the Crusaders, landing in North Africa, and it was changed to Grigri. And, actually, every Grigri in the world is related to me.

I was born… at Fox Chase Hospital, right here in Philadelphia.

When I was a little girl, I wanted to grow up to… drink wine. No joke. I was sitting out on the terrace with some family and good friends and somebody looked down and me and asked me what I wanted to do, and I said, “I want to drink wine.” They were like, Oh my God.

These days, I live in… Queen Village.

I would describe my job as… being the point person across-the-board. I’m the wine person. I’m the general manager. I help with P.R. I do all of the design. And, officially, I am managing partner with my dear old dad. We opened Good King in November of 2013.

My first job in life was at… Dunkin’ Donuts in Mantua, New Jersey. It was attached to a Baskin-Robbins, and so basically I spent my days selling and eating donuts and ice cream. I think I lied about my age on the job application. I was probably 14.

My first job in Philly was at… Chhaya Café in South Philly. I was barista-ing, if you will.

I learned about wine by… being half French. I have been exposed to the elements of wine since I was born. It was always an important part of the way I was brought up. I had no idea I would fall so intimately involved with the restaurant industry. But here I am: drinking, selling and talking wine all the time, with pleasure.

I’m excited about Philly Wine Week because… every year we see real progress in the growth of the wine scene in Philadelphia. People are more and more tuned into what’s happening in wine, and that comes with more freedom for us to present lesser known wines.

The last time I was in France was… in February. Work and play. R&D and spending lots of time with winemakers.

The biggest trend in wine right now is… natural wine. Everybody is talking about it. If you are concerned about the kind of food you put in your body, you should care about the wine you enjoy and about supporting wine growers and makers who are prioritizing environment and health.

The last time I drank wine out of a box was… something by From the Tank while I was on the subway in New York. Seriously.

The most expensive wine I’ve consumed… is hard to say. I am friendly with a lot of pretty serious wine collectors in France, and it’s not uncommon for something like a 1985 Cote Rotie to show up on the dinner table. I can’t place a value on a lot of it. There is very old stuff we could never find stateside, or at least not without a real challenge.

One restaurateur I really look up to in Philly is… actually two in one. Marcie and Val. They are dream-workers and female powerhouses, and they are taking over the city with so much poise and elegance. Another would be Ellen Yin. I’m going with female stars right now because obviously I am a woman working in an industry that tends to be so male dominated. And then in terms of young people doing great things, Hanna and Chad at Friday Saturday Sunday.

If you’re only going to order one menu item at Good King Tavern, get the… socca. It’s tried and true. It’s been on our menu since we opened. And get it with a Chenin blanc, which I am always pouring by the glass.

One thing I’d love to change about the Philly food scene is… the liquor laws in the state. We still have state-controlled alcohol, and that makes for a lot of challenges for restaurants.

If I’m not drinking wine, I am probably drinking… mezcal. I was recently in Mexico City and was surprised by the culture of mezcal. It’s not something we’ve even begun to tap into. The mezcal culture is like wine culture: long lists that vary so drastically in terms of regions, plant types, the person making it. It’s so interesting.

One restaurant I am dying to get to is… Pizzeria Beddia, which just opened. Joe is a good friend and also has a passion for good wine and good food. [Ed Note: Read our new interview with Joe Beddia here.]

The thing most people get wrong about wine is… that it is too complicated to enjoy. Part of what we do at Good King Tavern is create a safe space for people to explore wine on their own terms. Our tag line is: Wine is for drinking, not for thinking. You should be able to drink wine the way you can drink beer.

The correct way to taste a bottle of wine that I present to your table is… simply to taste it and tell me if you like it. And don’t be afraid to be honest. There’s this old school mentality of how to taste it, but we handle it more casually. We’ll open it, you taste it, and if you don’t like it, we’ll find something else for you. We’re here to make you happy.

The hardest food to pair with wine is… truffles. We constantly talk about that in the wine world.

If you know nothing about wine, the first book you should read is… Sommelier’s Atlas of Taste. And listen to the podcast I’ll Drink to That. And read anything by Alice Feiring, the first American to really dive into the natural wine world.

If you spend $50 on your meal but another $450 on a bottle of wine, the tip should be… whatever feels right. I know this is debated all the time. It’s hard. It’s hard to justify 20 percent on that bottle. What I would personally do is tip 20 percent, but that’s coming from my perspective. As a general rule, just do what you think is right. I don’t think anybody would be angry if you tipped less than 20 percent as long as you are tipping something on that bottle.

Yelp… could be a little more supportive of businesses. We recently had a negative Yelp review because my bartender had to cut somebody off. The girl flipped out. A customer had to tell her to calm down. So she went home and wrote a review and depicted a completely false story. I witnessed everything. I know. I am actually working with Yelp right now to get that review taken down.

The best device to use to open a bottle of wine is… just an old school wine key. Simple.

My standard cocktail order is… a Beefeater Negroni with sparkling wine on top.

The last beer I drank was… Victoria in Mexico City. I don’t drink a ton of beer.

One restaurant that has a wine program that really knocks it out of the park is… Walnut Street Cafe. And, actually, I love the wine program at Fountain Porter. A really tight selection of natural wines at really great prices in a relaxed environment — all while listening to records.

When I’m not working, you’ll usually find me… at home cooking and drinking wine with friends or my significant other. Well, or at Palizzi Social Club.

The Amazon products mentioned in this story were selected by an independent editor. Philadelphia magazine may earn revenue as a result of purchases you make through these links.