Michael Schulson and Nina Tinari set out to recreate a perfect South Philly experience in Center City. They may have succeeded too well. 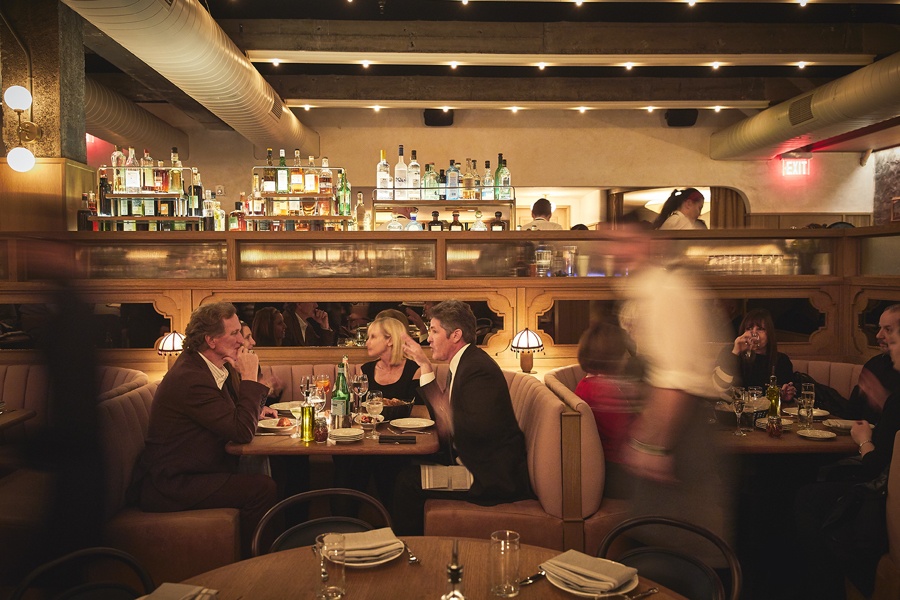 The dining room at Giuseppe & Sons | Photo by Michael Persico

There’s a moment at Giuseppe & Sons, the new art installation from the Schulson Collective, that’s pure magic. If you’ve been there—which is likely, judging from the crowds rushing in every day—you know the moment I’m talking about: the staircase down, and the gentle curve of the long hallway leading to the doorway spilling soft golden light.

And if you haven’t been yet, let me explain how, for dinner, you’re met at the door by young men in nice suits and beards, all wearing earpieces with wires trailing into their jackets.

You say, “Dinner?” and they say, “Of course. Right this way.” Then they lift an arm and usher you downstairs.

Order This: There’s nothing bad here, but don’t miss the Sunday gravy, the fresh mozzarella or the cannoli.

It feels special, even though it’s ridiculous. But you go, footsteps silent until you reach the bottom and make a turn into a cream-colored hallway hung with a thousand framed photos. You can hear music and muffled voices, see a sliver of the bar and the passing blurs of bodies in motion. The closer you get, the louder everything gets. And then you’re there, stepping from the plain and ordinary world into a swirling, garlic-scented, gold-hued heaven of liquor and red sauce.

It’s a Hollywood trope made corporeal. The long take from Goodfellas. The final scene in Titanic. And Schulson knows it. He pulled the same trick at Double Knot, then repeated it at Harp & Crown. It’s his signature move now, but it doesn’t disappoint. It just feels … cool. 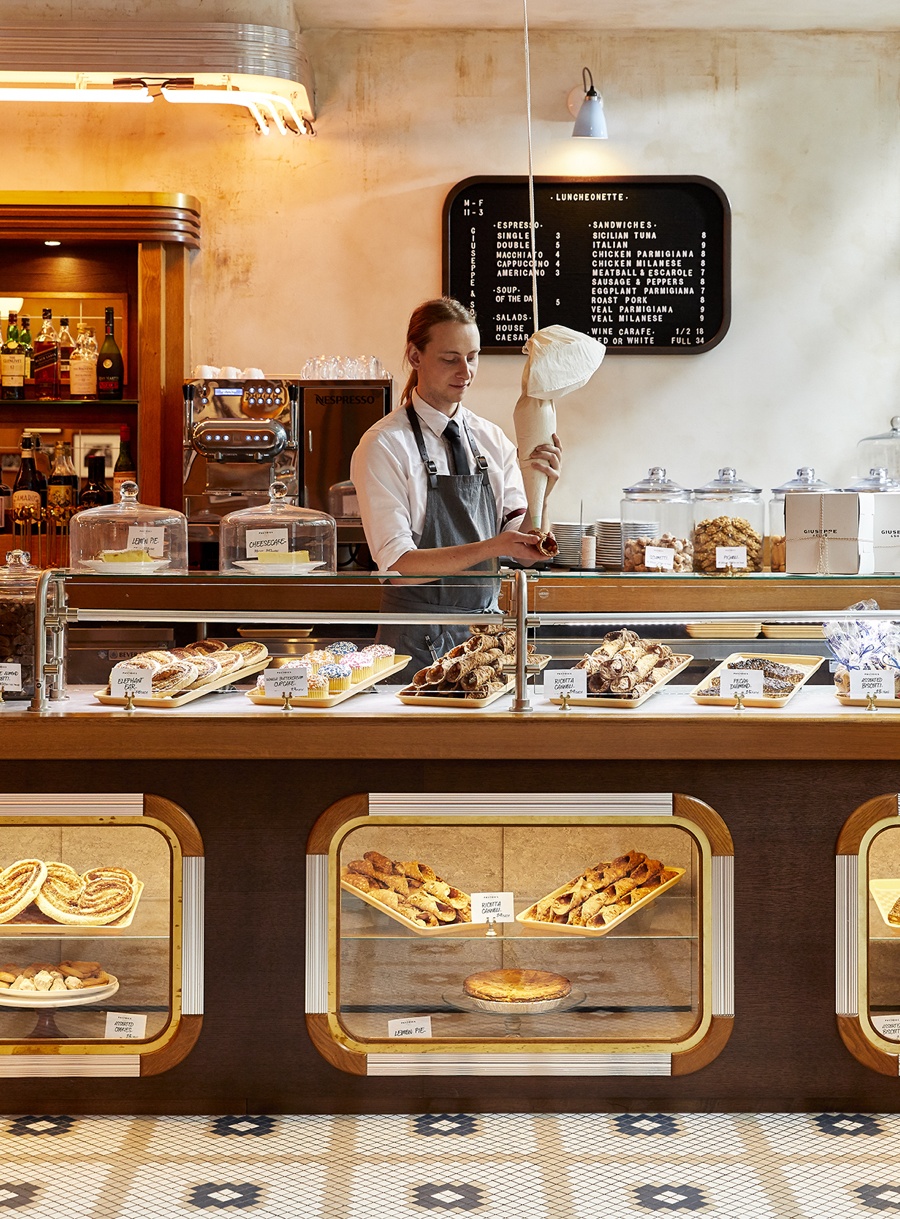 A Termini cannoli, filled to order | Photo by Michael Persico

But let’s back up for a minute. Upstairs, during daylight, Giuseppe & Sons plays the luncheonette game. It’s loud and crowded during the rush, with lines and people standing around smudging up the bakery cases. There are chicken parm sandwiches, meatball and escarole hoagies on bread from Formica Bros. in Atlantic City. They all taste like the leftovers of last night’s ­party—like they come with memories of fun built right in. And the pastry and cannoli are from Schulson’s partners in this experiment, this experience, this show.

Schulson threw in with the Termini family this time around, so those hand-rolled cannoli are just like the ones you’d get in South Philly. The red sauce is straight from the source—the kitchen at Mr. Joe’s Cafe, the family’s Italian spot across from their bakery. Vince Termini Sr. and his sons, Vinny and Joe, were brought in to lend some soul and authenticity to this Center City operation. To keep it from becoming a South Philly theme restaurant, basically. 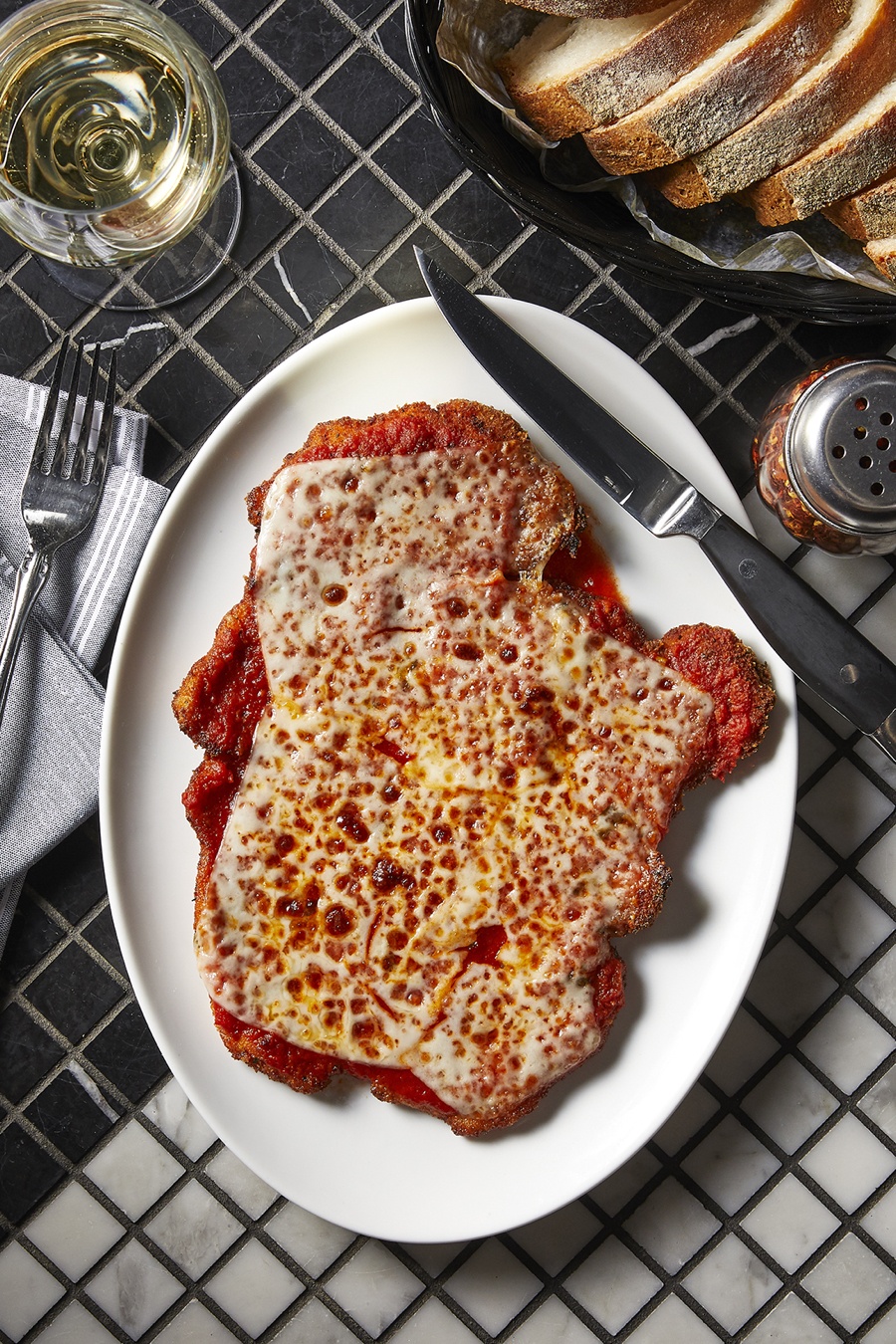 Still, that Sunday gravy is exactly right—a huge platter of meatballs and fennel sausage over house-made spaghetti in a sweet red sauce given depth by the fat of the meat it simmered with. The arancini are properly addictive—crispy outside, smooth and gooey inside. The beans with escarole are so soft, so comforting, that it’s easy to miss how dull they are—lacking anything that might distinguish them from those at restaurants all over the Northeast.

The chicken parm is good, breaded to order, smothered in cheese. Ditto the braciole—solid, but not inspired. Then there’s the scampi, which is, in a word, scampi-ish. It’s maybe five percent fancier than everything around it, with its delicate bread crumbs, razor-thin chilies and artfully careless plating. Yet even in this wild departure from the deliberateness of the kitchen’s mimicry, the pieces are all there (shrimp, lemon, wine, garlic), all flawlessly prepared. There’s just nothing animating them, nothing bringing it all together into some greater, more delicious whole. 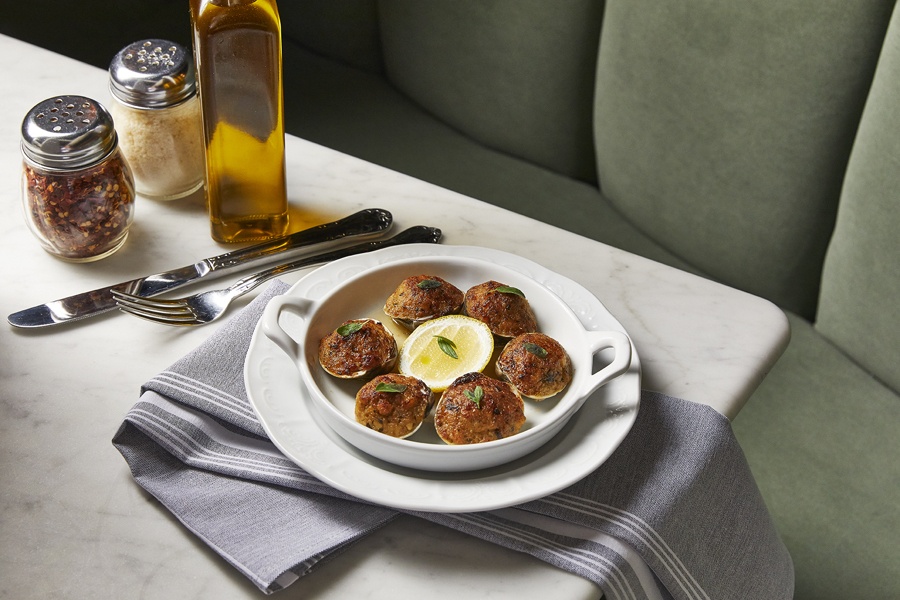 There was a lot of that, actually, adding to the sense that a perfect copy of something is still, ultimately, a copy. And let me be clear: None of this is really a criticism. Schulson and his team did precisely what they set out to do: They brought an honest portrayal of an idealized South Philly restaurant to the middle of Center City. And they did a phenomenal job of it.

Just know going in that this is a set. A scrim. A machine made for manufacturing good times. They set out to re-create a fantasy and did it perfectly, neither overreaching nor underwhelming. But the experience of eating at Giuseppe & Sons may hang with you far longer than the memory of what you actually ate.