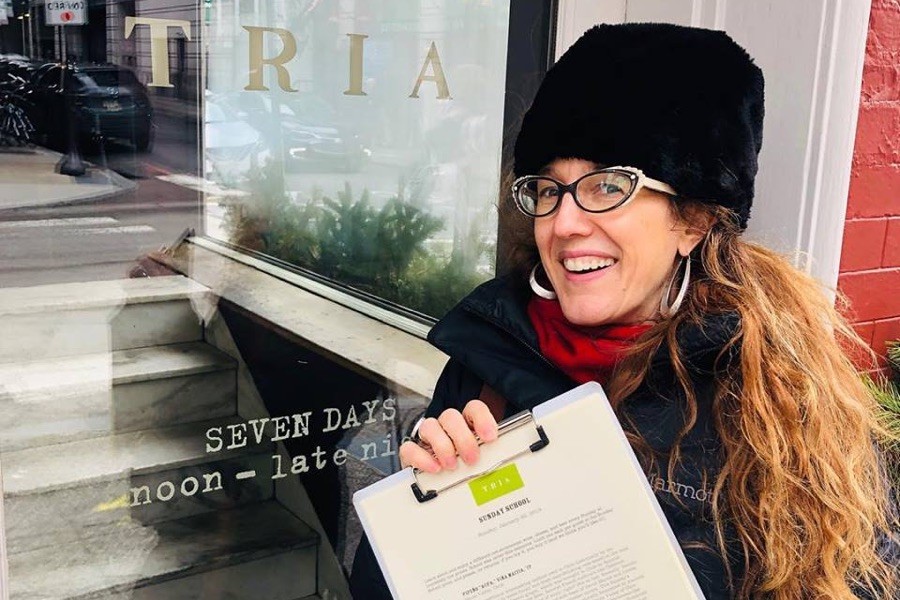 Tria, Philly’s destination for cheese, beer, and wine, has had a rough couple of years. Their foray into more restaurant-style fare, Tria Fitler Square, closed in summer 2017 after just two years in business, and the company had to pull out of Tria Wine Garden, originally set to open in partnership with FCM Hospitality in the current Harper’s Garden space.

Now, they’re injecting some fresh talent into the business, with a new cheese director and a new chef at Tria Taproom.

Tenaya Darlington, better known as cheese writer Madame Fromage, is taking on cheese curation across the three Tria locations in Wash West and Rittenhouse, selecting the 16 cheeses on their menu and choosing varieties for their weekly Sunday School educational offerings. She’ll also be training staff and writing blog posts for Tria’s website.

A creative writing professor at St. Joe’s by day, Darlington brings with her some serious cheese cred. You may know her from her long-running blog, or the cheese tome she wrote for Di Bruno Bros., the cocktail books she writes with brother Andre Darlington, and the epic Cheese Ball she throws every couple of years.

Meanwhile, longtime Sidecar chef Brian Lofink has been in place as executive chef at Tria Taproom for a few months now. In addition to launching a new menu, which should be in place by the end of next week, he’s started a new Sunday Supper series there.

The menu, which runs from noon until 9 p.m. on Sundays this winter, offers four non-cheesy comfort food courses for $25 per person ($21 if you skip dessert). Think warming soups, fresh salads, and entrees like grilled meatloaf, buttermilk fried chicken, and winter vegetable lasagna.

The price goes up when the spring menu rolls out on March 24th, so come in from the cold and take advantage of this deal while you can. Check out the full Sunday Supper menu here.