1149 is shooting to softly open with lunch service later this month, with plans for dinner series, an herbal apothecary, and more in the works. 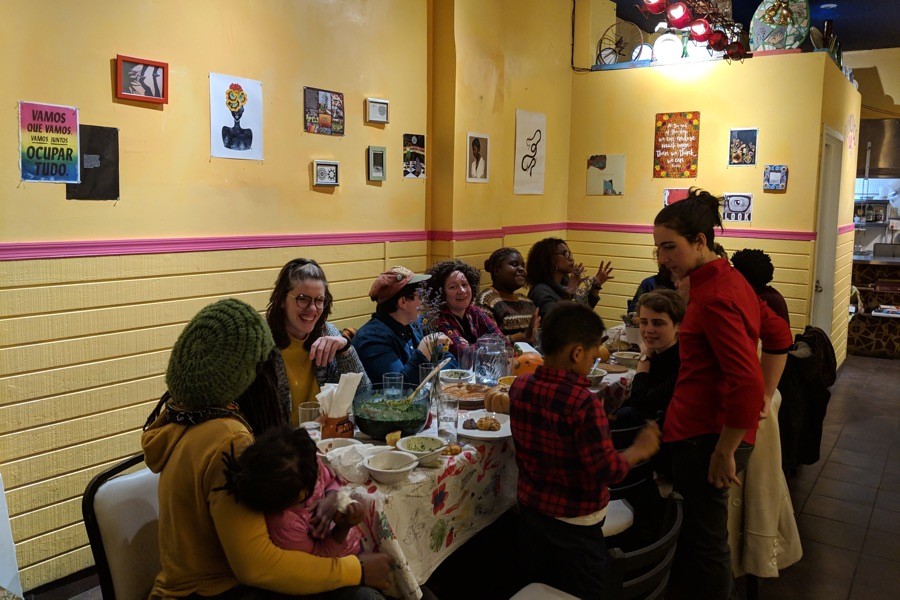 We told you about 1149, the cooperative restaurant, commercial kitchen, and community space that’s moving into the former home of El Compadre at 1149 South 9th Street, back in November.

Since then, initial cooperators Jena Harris of catering company food everyone deserves and Al Pascal of bike-powered bread subscription Fikira Bakery have been busy working on personalizing space and hosting open houses to connect with potential collaborators and community members.

They’ve also signed on two more producer-owners, South Philly Barbacoa and Delaware-based caterer Chef ThugLife. They’ll use the kitchen for their own businesses, contribute to 1149’s regular lunch menu, and serve as advisory board members. Cooks for the Culture, a collective of Black chefs in Philly organized by South chefs Elijah Milligan and Kurt Evans, is also planning to use the space for intimate dinners featuring its members.

In addition to regular lunch service with a menu developed and executed by 1149’s producer-owners, Harris said that they’re working with local herbalists to sell plant medicines at the space and hoping to work with local farmers to supply a retail farmstand outside once the weather is warm.

“Our programming is evolving very organically — it’s not something that’s fast,” Harris said. “We pushed to be ready, but we recognize that the ppl who need to be in the space are gonna be in the space. We want to get quality programming and focus on folks who have important things to say.”

Harris and Pascal have also been fundraising for the project, seeking grants and personal loans in addition to an ongoing GoFundMe campaign that will help them with renovations to space’s interior, sprucing up its exterior mosaic, purchasing equipment from the previous tenants, purchasing initial inventory, and paying staff a living wage during the concept’s initial phase.

1149’s programming will begin in earnest in February, with a series of cooking workshops, movie nights, and dinners with Cooking for the Culture to celebrate Black History Month.

But they’ll start with a few dates in January, with a community day of workshops, music performances, and bites scheduled for Saturday the 19th, then a soft launch of lunch service on Thursday, January 24th, Friday the 25th, Thursday the 31st, and Friday, February 1st. Regular lunch service will begin Tuesday, February 5th.

The producer-owners will be hiring front-of-house staff in the coming weeks; those with experience or interest in working in a cooperative environment are encouraged to reach out for more info.

Support 1149 by donating to their fundraising campaign here and learn more about the concept here.