Why Philly Chefs Are Getting Fit

Inside the fitness craze sweeping through Philly kitchens. 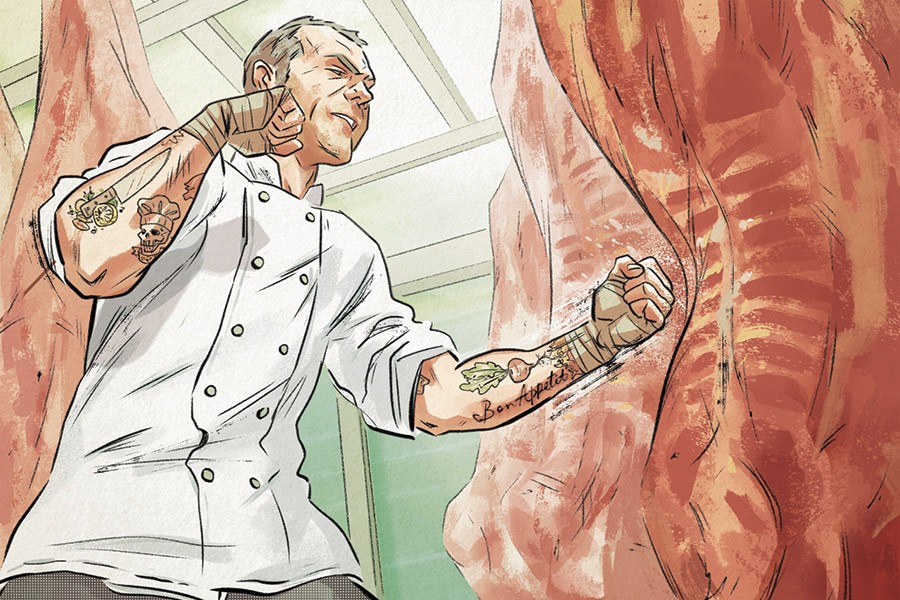 Early in his career, Brad Spence, now the executive chef of Amis, was on course to lose everything. He was an alcoholic, he was overweight, he had cirrhosis of the liver. “Stage four liver failure,” he says. “I was going to die.”

So he started boxing.

Well, not right away. It took seven years to turn his life around. He had to stop drinking first. Entirely — which is damn near impossible in an industry that’s shrouded in a thick layer of booze and drugs, and even tougher when alcoholism runs in your family.

Spence started small, by walking everywhere. His boss at the time, Marc Vetri, introduced him to jujitsu, which eventually led him to boxing. Boxing knocked him into the best shape of his life.

He isn’t alone, either — the health-and-fitness craze is sweeping through the most unlikely of places: Philly kitchens. Vetri, Jeff Michaud of Osteria and Yehuda Sichel of Abe Fisher all practice jujitsu. Nick Elmi is now a regular at his gym. Michael Solomonov, like Spence, likes to box.

Philly chefs taking their physical health more seriously means that we, the diners, are all the better for it. Want proof? Chefs are spending a lot of time making root vegetables the sexiest thing on the menu. And when’s the last time you ate a burger on a Tastykake? (Remember that?)

The chefs’ newfound fitness is all the more impressive given how hard it must be for them to stay on track. They’re stuck in hot, cramped kitchens all day and night, and when they’re finally out from behind the line, the only things open are bars, Wendy’s, and everything in Chinatown. Plus, unhealthy chefs have been encouraged from a cultural standpoint — the big, drunk, red-faced chef is a treasured tradition.

Of course, that’s not sustainable. Nick Elmi quit drinking this past year and makes sure to spend a few hours in the gym every week. “I turned 37 this past summer, and my body wasn’t keeping up with how hard I pushed it. The hours make it difficult, but I need those six hours a week to work on myself, mentally and physically. It makes me better at everything else.”

Published as “Trust the Skinny Chef, Too” in the April 2018 issue of Philadelphia magazine.