Walnut Street Café was supposed to be the biggest, most important opening of the season. I’m not sure why. 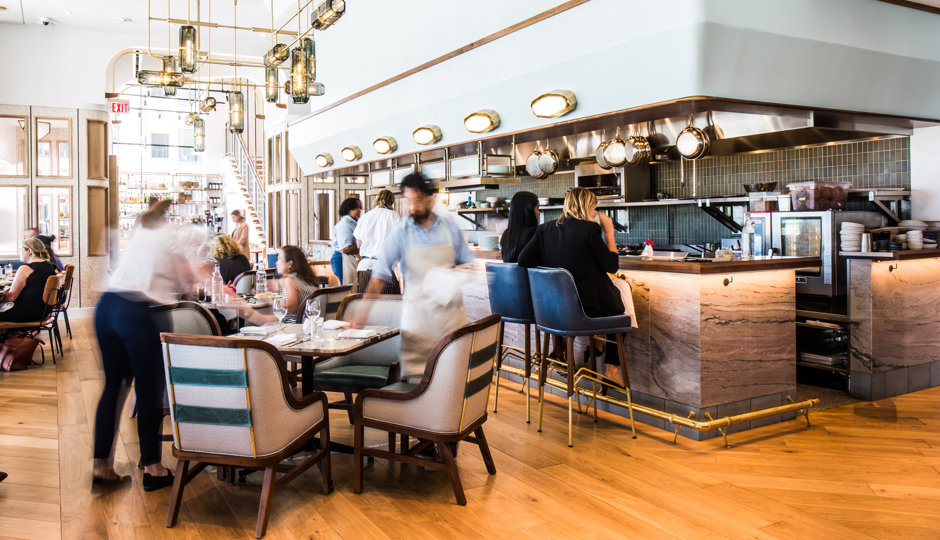 Walnut Street Café is supposed to be a Very Big Deal.

When it was first announced, people spoke about it like it mattered. Like it would mean something, one way or another. Everyone breathlessly speculated about how it would fit into the neighborhood, our scene. What it would bring with it (beyond, you know, food), and what would come in its wake. It was important because it was being opened in the FMC Tower, the shiny new skyscraper in University City with a shiny new AKA hotel, by a New York group wearing a freshly polished Michelin star for Rebelle — their modern French restaurant in Nolita. It was important because it was going to be beautiful. Because the team behind it was a four-headed beast: Branden McRill in front, Daniel Eddy in the back, a hip wine list by Patrick Cappiello, and pastries (more on that later) by Melissa Weller — all of whom would be shuttling back and forth between Manhattan and their new homes in Philly to keep an eye on their disparate operations.

Order This: The pie, for sure. Kouign-amann for breakfast, a steak for lunch, then go somewhere more interesting when dinner rolls around.

But really, Walnut Street Café is just a chef, a baker, a front-of-house specialist and a wine guy opening a hotel restaurant, a.k.a. an “all-day cafe,” in a new market. That’s pretty much the most common story there is today in the top end of the restaurant business. And when you think about it critically, where you come from or how many Michelin stars you’re bringing with you doesn’t count. There’s only one thing that matters: what you’re putting on the plate, right here, right now, in Philadelphia.

Walnut Street Cafe is beautiful, yes, with its clean, open space and architecturally twisty light fixtures. It’s so shiny it looks like a movie set, yet so well designed that it still feels welcoming. And the service is surprisingly good in this city where good service that doesn’t seem forced can still appear remarkable. Staffers are occasionally forgetful (I’m still waiting on a shrimp cocktail I ordered at brunch) but honestly sweet and truly concerned about how people are enjoying their meals.

But at dinner, Walnut Street is aggressively dull. The menu is both of-the-moment (but certainly not ahead of it) and so carefully comforting that it might as well be written on Nerf. The ricotta toast with lemon is Instagram-pretty, if only serviceable on the plate — the ricotta lumped on like cumulus clouds, and with roughly the same amount of flavor. The marsala is safe — a chicken breast, nicely cooked, breaded and laid over a chunky platter of whole button mushrooms and a marsala wine sauce with no edge to it, no sense of anyone coloring outside the lines.

The ravioli with brown butter and ricotta comes in a very small portion, but it has the chew of handmade pasta and the sense that some thought has gone into it, rather than just reflex. And the hanger steak is solid enough. But a good hunk of beef, ideally cooked, with a smooth bordelaise, on a plate floored with a sharp salsa verde for balance? That’s smart without being, you know, smart. Without breaking the trend-line of the menu, so bright and straight and middle-of-the-page.

So the problem at dinner isn’t necessarily with anything Walnut Street is doing; it’s with the environment it has entered into. It’s not that the new kid is terrible. It’s just that I can think of 50 restaurants in Philly that would be better. Fifty places I would tell people to go to before I’d send them here. 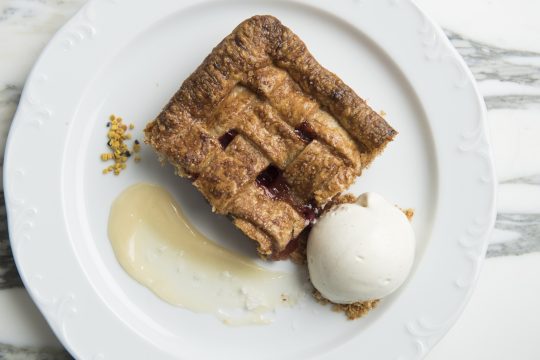 At lunch, though, things are different. Walnut Street is just as lovely and welcoming. The service, if anything, is even better. And the menu feels different because it’s unexpected. Because when the sun is still out, that same steak becomes an indulgence, and a cold bowl of zucchini soup — bright green, with a delicately fried blossom on the side — is something you can’t find better just around the corner.

And don’t miss the apple slab pie with whipped honey. Melissa Weller, the baker and a Per Se alum, is the real deal. You can taste hints of her work everywhere (the brioche bun on the burger, for instance, and all the excellent breakfast pastries), but that pie is a masterpiece. Shaved strips of apple, perfect crust touched with just a little salt, rich but not overpowering, sweet but not cloying — it’s worth going for all on its own.

There was a time — not so long ago — when Philly’s restaurant community was very territorial. Not hostile to outsiders, certainly, but wary, particularly of people coming from New York and trying to cash in on whatever scrappy élan we’d managed to amass here. Former addresses didn’t matter. All that counted was what the newcomers brought to our game. Be yourself, do good work, don’t rest on your laurels, show us what you got — that’s how you made it in Philly.

The excitement over the coming of Walnut Street Café? It wasn’t misplaced. Just premature. The place has everything necessary to be great but, except in the pastry department, it just isn’t yet. It’s too timid — too unsure of its place and its crowds, too safe for a city that sends rich fools, fancy pretenders and carpetbaggers packing with admirable speed.

What you do today is what counts, not what you did yesterday or might do tomorrow.

Two Stars: Come if you’re in the neighborhood