These Philly Cocktails Are as Beautiful as They Are Boozy

Bartenders at these restaurants are serving up drinkable works of art. 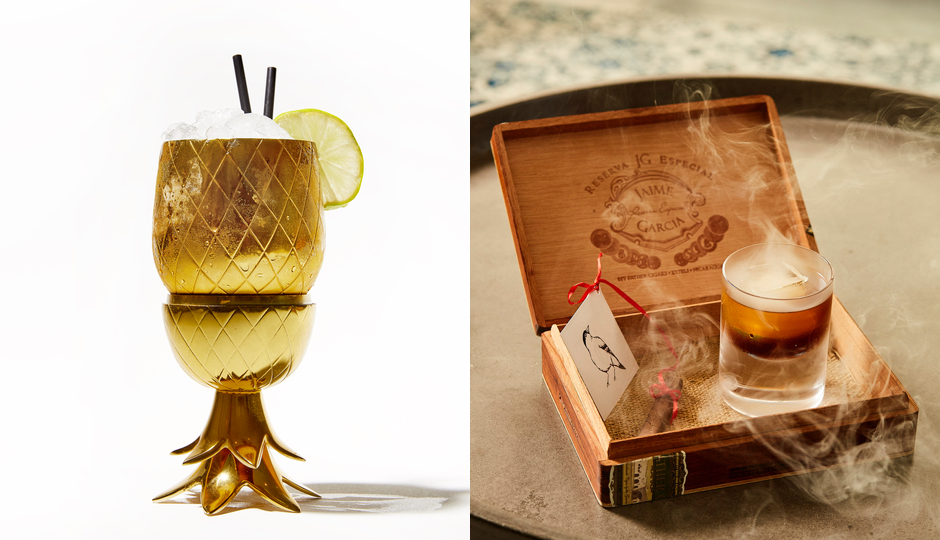 Photo of Pineapple-Cinnamon Daiquiri by Michael Persico | Photo of R.R. Cigar by Will Figg

Trying to remember Philly before craft cocktails is like trying to remember life before cell phones. It’s nearly impossible. So now that every neighborhood beer-and-shot watering hole has French aperitifs, bartenders are upping the ante. Here, four new-to-market drinks that could double as works of art.

Pineapple-Cinnamon Daiquiri at Walnut Street Café
This University City newcomer led by a couple of star-studded NY imports gives the once low-brow frozen drink the royal treatment by pouring it into a social-media-friendly golden pineapple chalice. Pop the crown off this $12 drink and take a good long sip of the delightful draught within. 2929 Walnut Street, University City.

R.R. Cigar at Maison 208
Thanks to 16-year-old scotch, smoked vermouth and a smoked cherry, this Rob Roy riff has way bigger flavor—and at $23, costs way more than the original. And on the swanky upper-deck bar, it’s served like a still life: inside a cigar box, under a smoke-filled cloche, alongside a hand-rolled cigar. Save that for later, though: Despite the restaurant’s retractable roof, smoking inside is still illegal. 208 South 13th Street, Midtown Village.

East Meets West at Banh Mi & Bottles
The star libation at this Vietnamese restaurant/bottle shop mashup is a mixture of whiskey, toasted coconut tincture, lime and coconut water served inside a—wait for it—real goddamn coconut. Want to make a night of it? It costs $13, but a refill is only $8. 712 South Street, Bella Vista.

The Well-Tempered Cocktail at Friday Saturday Sunday
Barman Paul McDonald pours drinks into the kind of showstopping vintage stemware your grandmother only busted out during the holidays, and he garnishes them like a bona fide florist. This latest beaut is a $15 mix of gin and Japanese whiskey that’s as delicate as the stemware it comes in. 261 South 21st Street, Rittenhouse.

Published as “Boozy & Beautiful” in the September 2017 issue of Philadelphia magazine.