With a family sorbetto recipe and a throwback vibe, Chris D'Emilio found his calling. 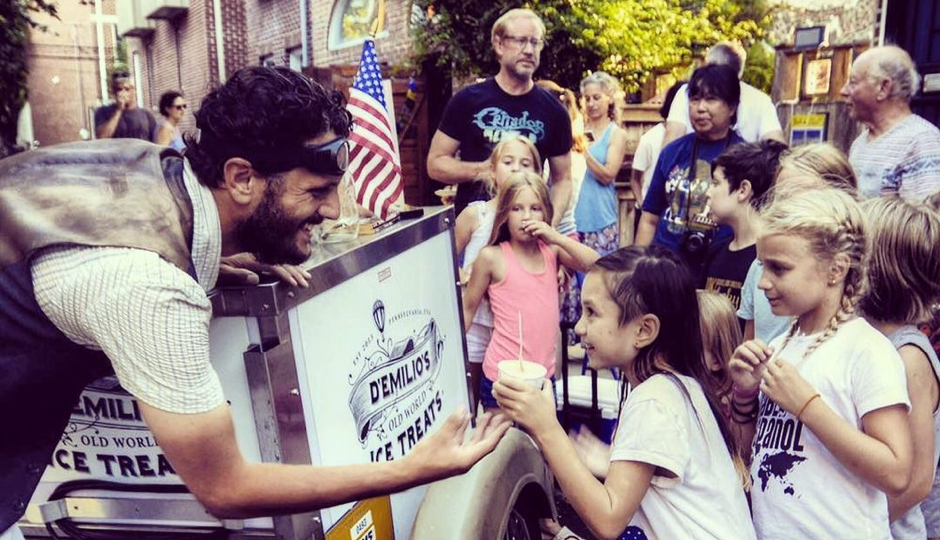 Chris D’Emilio asked himself that question a few years ago. And by any standard, he’s made his dream a reality in record time.

But it didn’t exactly happen overnight.

“I was a casino dealer at SugarHouse for six years,” says D’Emilio. Three years in, at the end of a particularly bad night, he sat at the bar, considering his options. “I was thinking, what’s a job that’s a not-job? And for some reason, ice cream man popped into my head.”

D’Emilio recalled the neighborhood ice cream man from his childhood in Langhorne, who would always give his family’s springer spaniel a free ice cream sandwich when they flagged him down for a frozen treat. He remembered the job as “something positive, innocent, that can really be good.”

So he started doing research. D’Emilio realized that there wasn’t much money in hawking ice cream if he was buying it from someone else, but the business would work if he made it himself. Luckily, his grandmother made “the most amazing sorbetto,” and he adapted the family recipe.

He whipped up a strawberry-amaretto batch, loved how it tasted, and started checking out books on desserts and small business — like Ben & Jerry’s Double Dip: Lead With Your Values and Make Money Too — from the library.

D’Emilio was ready to just do the water ice business as a side hustle, but friends encouraged him to invest in marketing and make the operation look professional.

“I’m from a blue collar family,” he said. “I didn’t think about that — how being successful is like, 90 percent marketing — so I started suffusing my passion for history and dessert into the [business planning] process. Plus, it was a good excuse to get a sidecar for my motorcycle.” 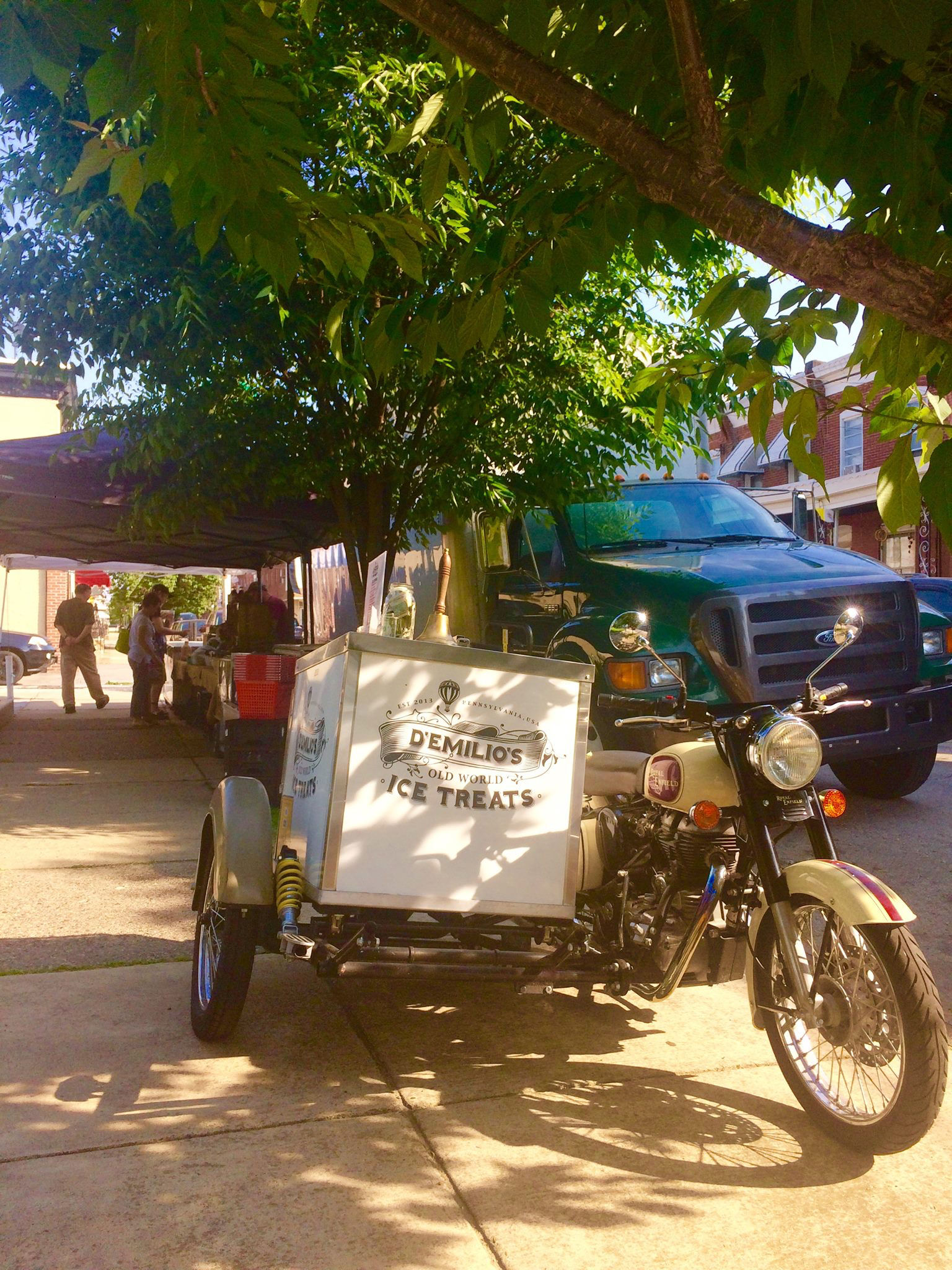 The result? A mobile food business with a decidedly old-timey vibe, from the straw boater, bowtie, and vest D’Emilio wears while slinging treats to the shining white freezer mounted on his bike. He formed his LLC in 2013, quit Sugarhouse in spring 2015, then officially opened for business with a free ice treats giveaway on July 4 — his grandmother’s birthday — that year.

“I was inspired by postwar military equipment,” he said of his now-uncommon mode of transport. “People were putting all kinds of things in their sidecars and selling them — mixed with a new immigrant peddler, penny-a-scoop kind of deal.”

His flavors, however, are contemporary: D’Emilio experiments with combinations like lychee rose water, coconut lemongrass, and sahlab, inspired by the Lebanese pudding made with pistachio, cinnamon, and coconut milk. Of course, he still pays homage to the old school with classic fruit flavors as well as chocolate, vanilla bean, and sarsaparilla, made with fellow farmers’ market vendor Goose Lane Egg Farm’s local root beer.

One key step enables D’Emilio to maintain his friendly, laid-back vibe even on hot, busy summer days: he prepackages his ice treats in cups after producing the gelato and sorbetto at the Greensgrow Community Kitchen. That way, he doesn’t have to fuss with scooping for each customer or deal with some of the health department’s more cumbersome regulations. 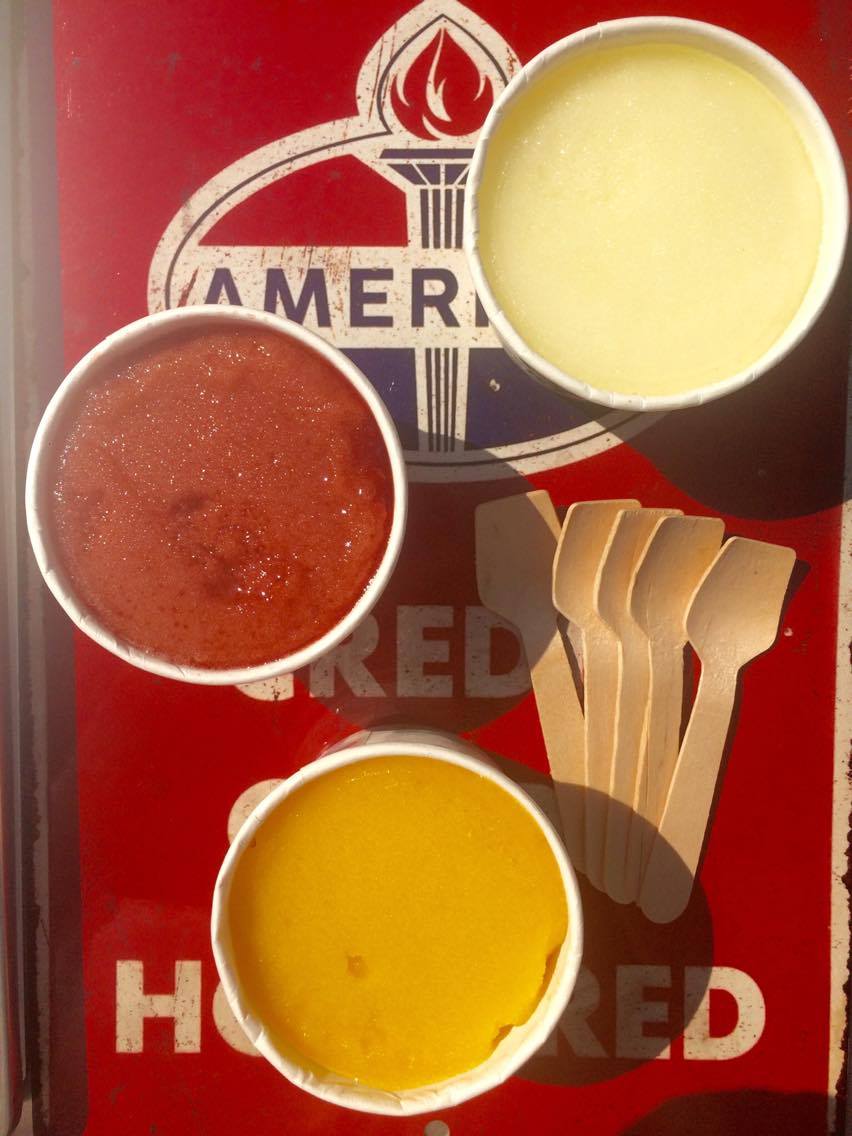 “Plus, it’s a more personal experience,” he says. “You just get to hang out with [customers] the whole time.”

D’Emilio has been going hard with a busy sales and production schedule during summers, hitting farmers’ markets around the city and setting up outside the Pennsport Beer Boutique. Then, he takes time off and lives frugally in the winter months, testing out new flavors that he’ll sometimes offer up for sale over social media out of his Pennsport home.

But at the end of May this year — just as the summer season was about to get popping — a run-in with another vehicle left D’Emilio and his custom motorcycle-freezer laid up with injuries for all of June and his Independence Day second anniversary.

As of a few weeks ago, though, he’s back on the road, donning his old-timey getup and announcing the presence of his delicious frosty treats with a the ring of a handbell once again.

“I live a simple life,” he says.” As long as I got my girl and I got my business and my house is here…this neighborhood is just the best. I think the little stretch down Moyamensing could be something special someday.”

Currently, you can find D’Emilio’s Old World Ice Treats at the Fountain Farmers’ Market on East Passyunk from 3 p.m. until 7 p.m. Wednesdays, at Powers Park in Port Richmond from 3 p.m. until 7 p.m. on Thursdays, outside Pennsport Beer Boutique at Wharton Street and East Moyamensing Avenue starting at 3 p.m. on Fridays, at the Chestnut Hill Farmers’ Market from 9 a.m. until 1 p.m. on Saturdays, and at Dickinson Square Farmers’ Market at East Moyamensing Avenue and Morris Street on Sundays from 10 a.m. until 2 p.m. Check Facebook and Instagram for the most up-to-date schedule.