In Atlantic City, Bet on the Food

A.C. might be the current face of tragic decline, but it’s still the Shore’s best food destination. Here are three reasons why it’s worth heading there now. 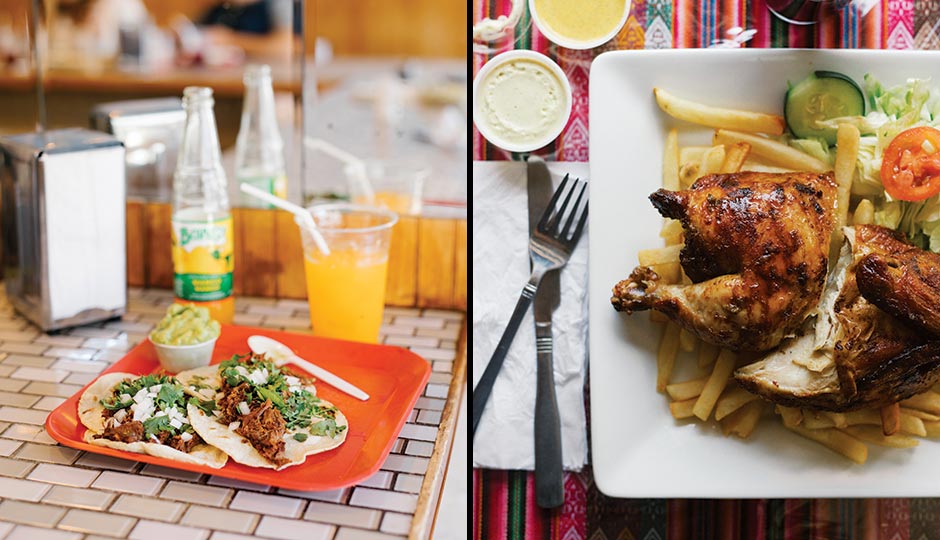 Tacos at Pancho’s, left, and the chicken at El Chalán. Photography by Ted Nghiem.

Jose Garces Is Back in Town

Jose Garces’s new restaurants in the Tropicana make the Revel snafu feel like ancient history. Olón has ocean views, an outdoor deck and a bright interior — all surprising for a casino eatery. The seafood here (grilled, raw, however it comes) is choice. His other spot, Okatshe, is just the opposite: You’ll duck through a secret door in a tiny Japanese candy shop and enter a dark, sprawling space styled like a buzzy Tokyo intersection. The large menu has sushi, ramen, standard izakaya fare (yakitori and fried things), and a bar list deep with sake and Japanese beers. (Both at the Tropicana, 2831 Boardwalk, 609-340-4000.)

The Ethnic on Arctic Ave.

A.C.’s got a crop of top-notch Vietnamese spots, but the friendly service and honest cooking — don’t miss the curry chicken soup — at Little Saigon (2801 Arctic Avenue, 609-347-9119) make this one a standout. A few blocks away: El Chalán (2641 Arctic Avenue, 609-345-8464), a Peruvian hole-in-the-wall that’s ideal for large groups. Juicy pollo a la brasa, fresh ceviche and a basket of empanadas make for great post-beach eats. And for tacos, hit up Pancho’s (2303 Arctic Avenue, 609-344-2062), where tortillas and masa cakes are hand-formed to order — an absolute game changer on the Shore’s Mexican scene.

The Classics Are Unflappable

After 70 years, White House Subs (2301 Arctic Avenue, 609-345-1564) has seen the city’s highest ups and downs, but nothing can shake its machine-like ability to put out some of the best sandwiches in the state. Dock’s Oyster House (2405 Atlantic Avenue, 609-345-0092) recently renovated the bar, but it’s still one of the most elegant spots for old-school thrills like broiled oysters and steaks to match your $1,000 ’13 Grand Cru. And make sure you cap long nights at Tony’s Baltimore Grill (2800 Atlantic Avenue, 609-345-5766), because 24-hours bars are a dying art, and the spaghetti and pizza are tasty around the clock.

Published as “Bet On the Food” in the July 2017 issue of Philadelphia magazine.