Behind the Line: Michael Symon, the Borgata’s Newest Chef

A conversation with the popular TV chef about Yelp, Atlantic City, and why you can keep your sage vapor and beet foam away from him, thank you very much. 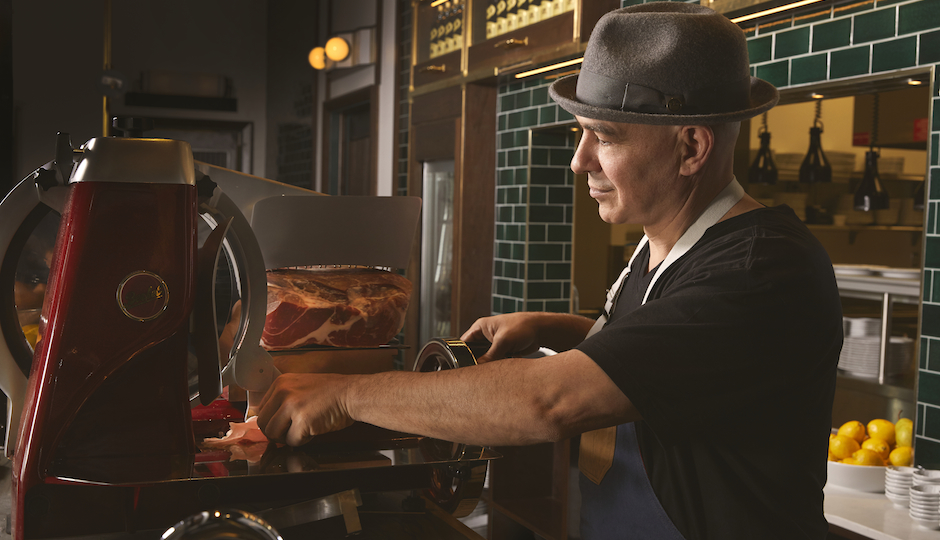 Wearing his signature hat, Michael Symon works the slicer at Angeline at the Borgata. (Photo by Michael Persico)

On Saturday, restaurateur and The Chew co-host Michael Symon joins Bobby Flay, Gordon Ramsay, Wolfgang Puck, and Guy Fieri in Atlantic City’s roster of “celebrity chefs” when he debuts Angeline at the Borgata. Here, the Iron Chef and James Beard winner tells us why Philly is so great and why he really wishes we wouldn’t call him a celebrity chef.

I learned to cook… from my mother and at the Culinary Institute of America.

I got my first restaurant job in… Cleveland, Ohio at Geppetto’s Pizza & Ribs. I was a line cook.

I opened my first restaurant… in 1997. Lola in Cleveland. And it’s still open 20 years later. My first restaurant outside of Cleveland was Roast, which is still there in Detroit since 2007. It’s a wood-fired meat house.

If you’re only going to order one dish at Angeline, make it the… Angel’s lasagna. Named after my mother, who still lives in Cleveland. It’s about 30 layers of bolognese, ricotta, fresh mozzarella. It’s delicious. Or the porchetta: pork belly and loin, skin on, that is slow-cooked for 12 hours and served with mostarda, extra virgin olive oil, and a 40-year balsamic. 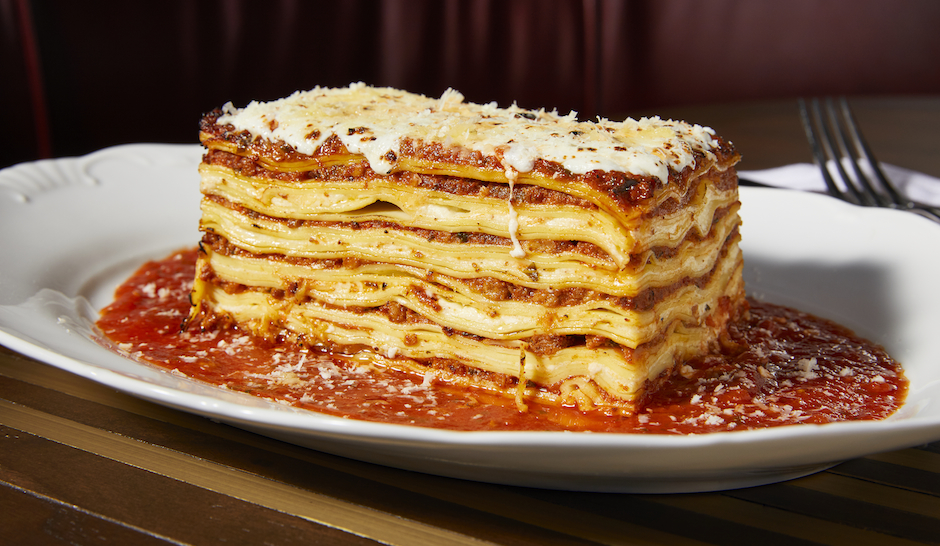 Angel’s Lasagna at Michael Symon’s Angeline at the Borgata in Atlantic City. (Photo by Michael Persico)

One food trend that I’m really tired of is… molecular gastronomy. I don’t like overhandled food. The next big trend is going to be simplification, a continual movement back to basics. It’s going to continue to move further away from foams and this and that and all this wackadoodle stuff and get back to great product cooked simply and put on a plate.

If you’re buying me a bottle for my birthday, make it… bourbon. I love Knob Creek. That’s my everydayer. And Whistling Pig. My summer cocktail is Knob Creek Rye with a little splash of Aperol on ice and some of that blood orange soda from San Pellegrino.

When people call me a celebrity chef… I laugh. The whole thing just seems ridiculous to me.

One mistake most home chefs make is… underseasoning their food.

The hardest thing about the restaurant biz is… paperwork.

The hardest thing about the TV end of what I do is… getting off the makeup.

To stay in shape… I do vinyasa flow yoga.

The last time I had a cheesesteak was… two weeks ago at John’s Roast Pork. When I’m coming from Cleveland, I fly into Philadelphia, and I went into town to see Marc Vetri, who is a good friend of mine. I have a lot of good buddies in Philly.

My impression of the Philly restaurant scene… is that it is deep and dynamic.

One cookbook everyone should own is… Seven Fires by Frances Mallmann. It’s someone who loves cooking with live fire. Most of our restaurants are live fire. It’s just such an intuitive cooking stile, and the book is eye-opening and very passion forward. My second choice would be Zuni Cafe by Judy Rodgers.

One food I just cannot stand is… raspberries. I just hate them.

The most expensive meal I ever had was at… French Laundry. We had a 40-course tasting. It was crazy. A six-hour dinner. I honestly can’t remember how much it was, but I remember thinking that I still should have paid more. I also remember that my father, who did my books at the time, saw the bill and yelled at me for a half-an-hour.

I’m afraid to try eating… nothing. I’ve eaten everything at some point in my life. I’ve eaten balut, which is gross and horrible. Testicles. Ants. Bugs. That snake urine thing.

The priciest thing at Angeline is… the ribeye, a prime, 18-ounce, 18-day dry-aged cut of ribeye. It’s $48. That’s actually a pretty good deal.

One kitchen gadget I cannot live without is… my microplane.

I decided to open at the Borgata because… my mom loves the slots.

When someone tells me they want to open a restaurant… I tell them to run.

Yelp is… awful. There’s reason there are food critics. Not everybody should be a food critic. You should have to specialize in it and be able to talk about it correctly.

The TV chef I respect the most is… Bobby Flay. You’d be hard pressed to find a TV chef who spends more time in his restaurants. He’s mastered the balance between quote-unquote celebrity chef and working chef.

People who say Atlantic City is going under… probably haven’t been there in 30 years.

I’ll open a spot in Philadelphia… never. I like going there to eat too much. Why would I want to go there to work. I will be opening a bar at the airport though, but that’s about it.

I got my first tattoo… in high school, a little cartoon devil. I probably have about 200 hours worth of tattoos on my body.

Some of the famous people I’ve cooked for have been… President Bush, President Obama, and President Clinton.

When they make a movie about my life, the actor who should play me is… The Rock.