Here Are Your Memories From the Center City Applebee’s

The Applebee’s in the former Bookbinder’s is on its way out, as CBRE is looking for a new tenant. We asked you for your memories. You obliged (kind of). 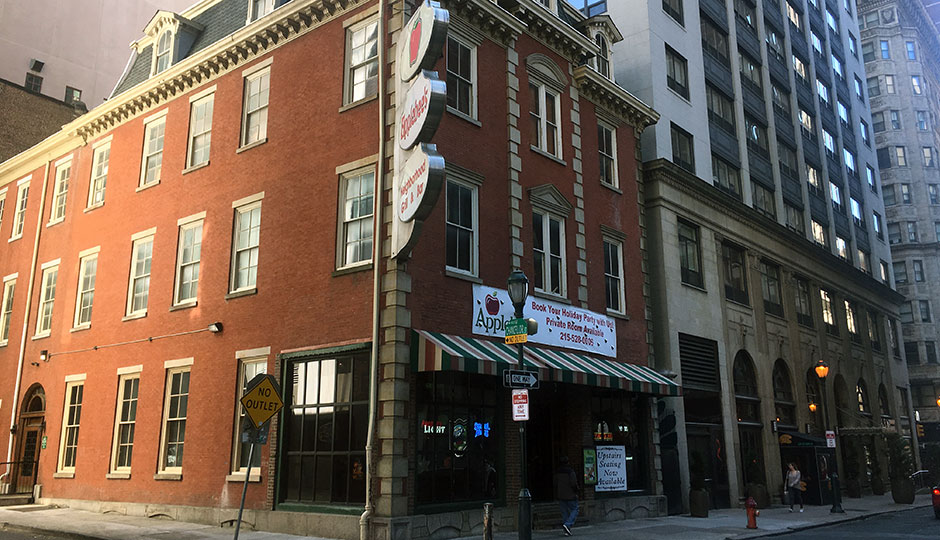 It appears the Applebee’s in Center City is on its way out.

Earlier today real-estate company CBRE sent out a “now leasing” notice for 215 S. 15th Street, the old Bookbinders Seafood House location. An Applebee’s replaced Bookbinders after it closed in 2004. After a long run, a new tenant is being sought.

A manager at the Applebee’s declined comment. Applebee’s media relations did not respond to a request for comment. But CBRE is looking for a new lessee. It’s been real, Applebee’s.

The stretch of 15th Street in Center City is a veritable chain restaurant row. Ocean Prime (maligned by our own Victor Fiorillo in 2013), Cheesecake Factory, Max Brenner: Chocolate by the Bald Man (note: there is no actual one bald man named “Max Brenner”), Howl at the Moon and Fox & Hound are all chains.

This is, by far, the nicest thing anyone had to say about Applebee’s. As a vinyl sign said outside their location, they were a good spot for events. This is true: The only time I was at the Center City Applebee’s was for a high school friend’s work event. I think I had a free drink ticket.

@dhm We actually had our Christmas Party there in 2008 when I wrote for the new Bulletin newspaper. It was classy AF.

One person actually did his meet-the-parents date at Applebee’s.

@dhm Ex girlfriend met my parents there. Could tell things were going poorly when mom sprung for a Long Island. RIP ‘Bees.

Many people said they’d just walked by, with some referencing the good non-chain places on the block as better options: Good Dog, McGlinchey’s, Tops and Jose Pistola’s are all excellent bars right on 15th Street.

Others referenced another nearby business establishment: The Gold Club, a strip club.

@dr_pizza_MD @dhm As soon as the gold club offered a surf and turf lunch special, it was game over

@dhm That was my only landmark to know how to find The Gold Club.

Others had mean things to say about the food.

@dhm I work across the street. It’s dead every single day at lunch but they still find a way to mess up both times I’ve ordered from here

@dhm ate there one time during lunch hours, only group of ppl in the restaurant, service was terrible and so was the food

@dhm One time I walked in to Center City Applebee’s to see if they had an edible salad. They didn’t. I subsequently exited the Applebee’s.

Some wanted people to make sure people know they weren’t going there.

Once told a Chinese co-worker “No, Americans don’t really eat that stuff” when he asked if I go to Applebees with my family https://t.co/SygwEykKqa

There were also some excellent karaoke stories.

@dhm I did karaoke there once. The musical department from UArts showed up w/ props and did the entirety of Rent. Was the best.

And some drunk excursions.

that time me and a dozen or so friends got drunk in the empty upstairs area and ruined at least three first dates who were seated near us https://t.co/Uqt4h4AnDm

And some excellent jokes.

@dhm Any time anyone came to visit I would walk them past that and say, “That is the famous Philadelphia restaurant, Applebees”

But the closing of Applebee’s was hardest for Mike Donovan, the man who once tried to smoke up Justin Bieber at Johnny Brenda’s.

Alas. Goodbye, Philly Applebee’s. You will be missed, by some — maybe.