As we promised, 2014 is the Year of the Cheesesteak. And as part of the continuing coverage of the cheesesteak, we will be profiling cheesesteak rivalries around town.

When GQ’s Alan Richman came to town to rank his ten favorite cheesesteaks, one of the biggest complaints was the omission of Dalessandro’s Steaks in Roxborough. According to Ray Didinger, who went along with Richman on his cheesesteak hunt, Richman had eliminated the Roxborough stalwart from his list based upon a previous cheesesteak visit to Philadelphia.

Sunday, I set out with a couple of friends, including comedian Chip Chantry, to try both Dalessandro’s and Chubby’s across the street. Check out the results of our first Rivalry Tale of the Tape.

Tale of the Tape: Dalessandro’s Versus Chubby’s Pro Tip: If you order to-go, be prepared to name your condiments as they will be put on before the steak is wrapped up.

The meat, piled high on the grill resembles a brownish anthill. When a sandwich is ordered, the finely chopped meat was moved onto the hot part of the grill where cheese was applied and melted into the meat. No seasoning was noticed, Dalessandro’s relies on the molten cheese to add flavor to the meat. Or you can go for the gusto and scoop on the hot pepper sauce that’s available on the counter.

The meat is chopped so fine at Dalessandro’s that it resembles ground beef or a loosemeats sandwich popular in Iowa. But there is plenty of it on the roll, a nice change from some recent steak sandwiches I’ve had. The fineness of the meat also allows the cheese to mix in with the meat on the sandwich. The onions smelled great even when we were still outside, looked great on the sandwich but sadly didn’t add much flavor.

Walking out the three of us felt we had just eaten a very satisfying cheesesteak but we were intrigued to see what Chubby’s had to offer. Pro Tip: Chubby’s has a full bar, so if you want a shot of fireball while you wait for your cheesesteak, you can have that.

Grabbing the last three seats at counter, we ordered our steaks. One with American cheese and fried onions, the other with no cheese but fried onions. I’ll admit when the steaks were placed in front of us I hesitated. The mess of onions poured off of the roll. I’m not a big onion guy and even when I order them, most get brushed off the sandwich. The meat looked a bit scraggly, but compared to Dalessandro’s, at least it resembled steak over ground beef. The first bite was an eyeopener, the onions were truly caramelized and gave the sandwich a sweetness that Dalessandro’s lacked. I found myself adding the onions on that I initially brushed into the red plastic basket. The meat had more flavor too. At Chubby’s, when I peeked at the grill I actually saw gradations in the color of the beef. It wasn’t just a large dark mass, but steak going from red to pink and finally brown. Again, the only seasoning came from the meat’s own fat and the cheese which melted into the sandwich. A reach to the salt and pepper brought the flavor out further.

In what was a bit of shocker to my steak eating buddies and myself, Chubby’s was the clear winner. After years of considering myself a Dalessandro’s man, I have decided to cross the Avenue for a more flavorful steak with sweeter onions and juicier meat. 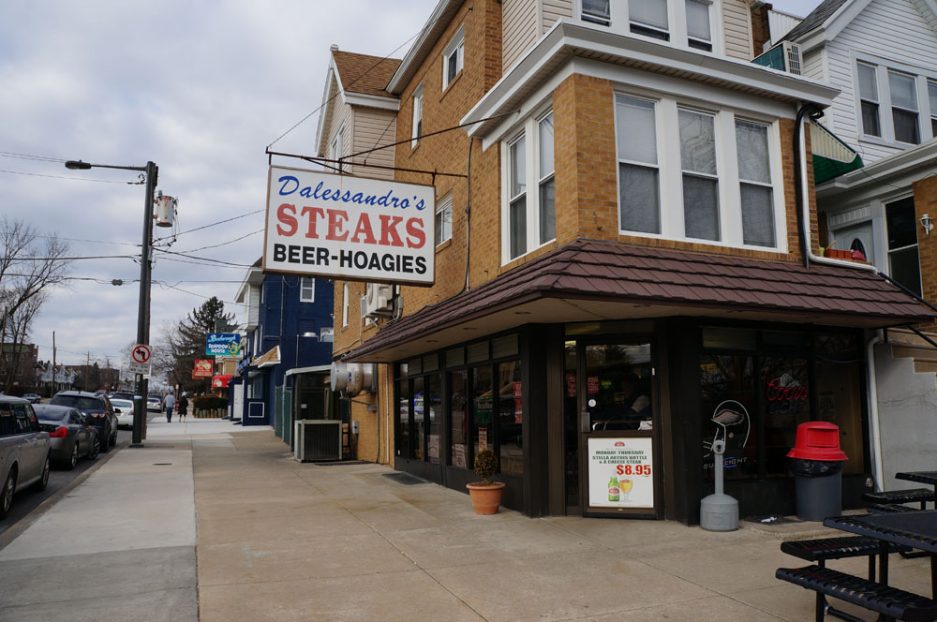 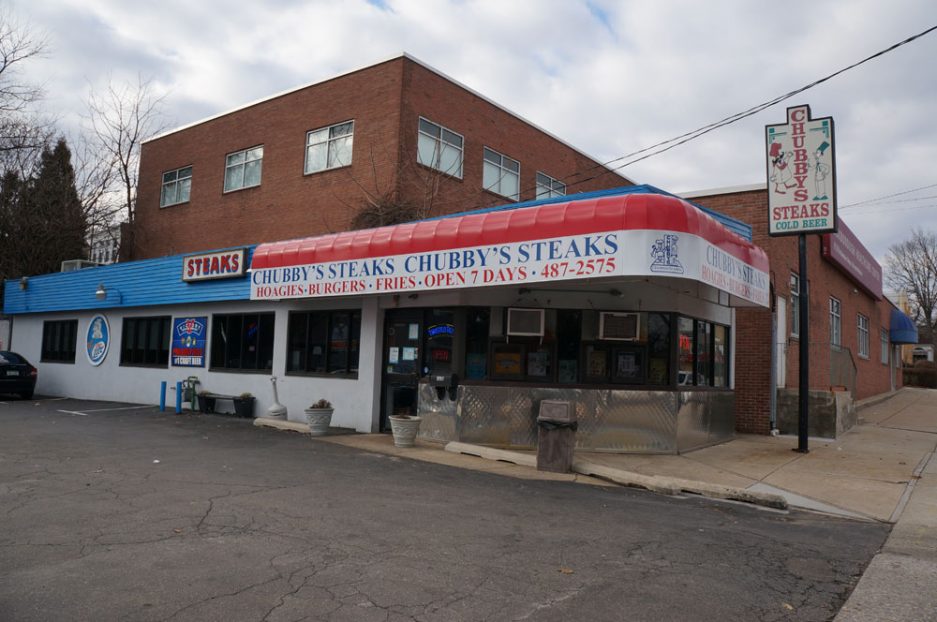 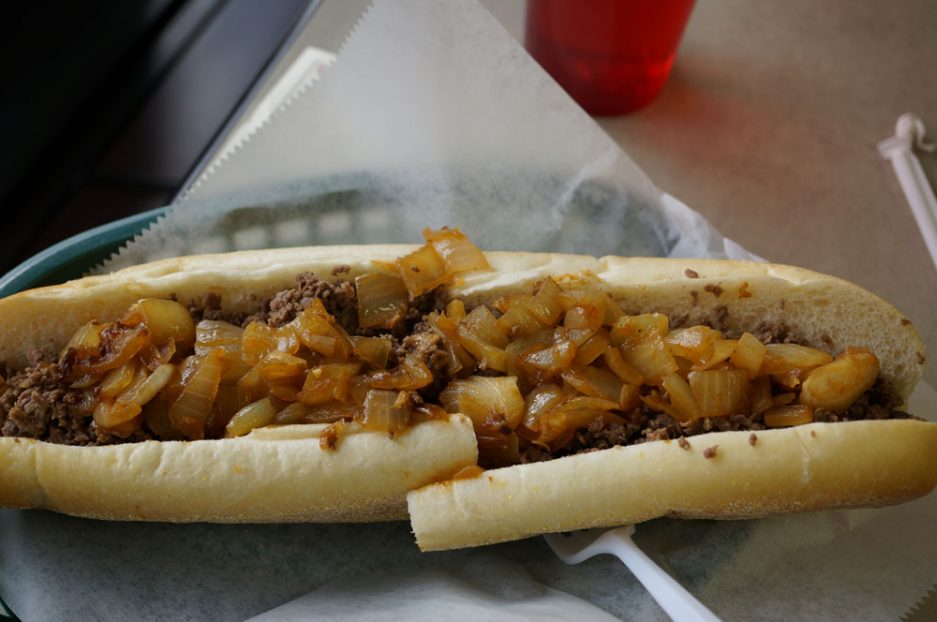 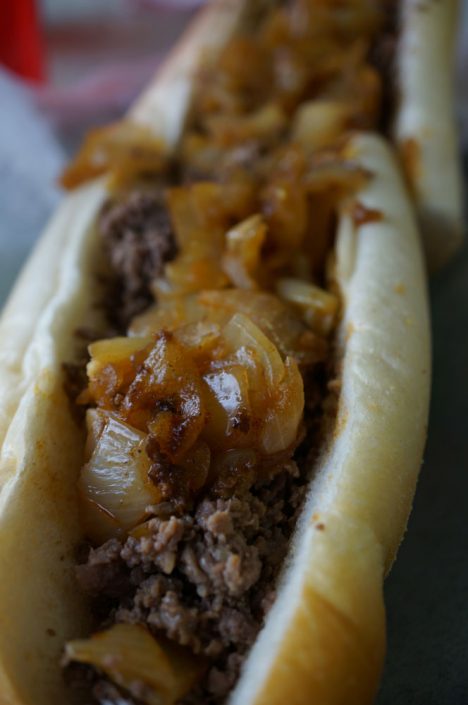 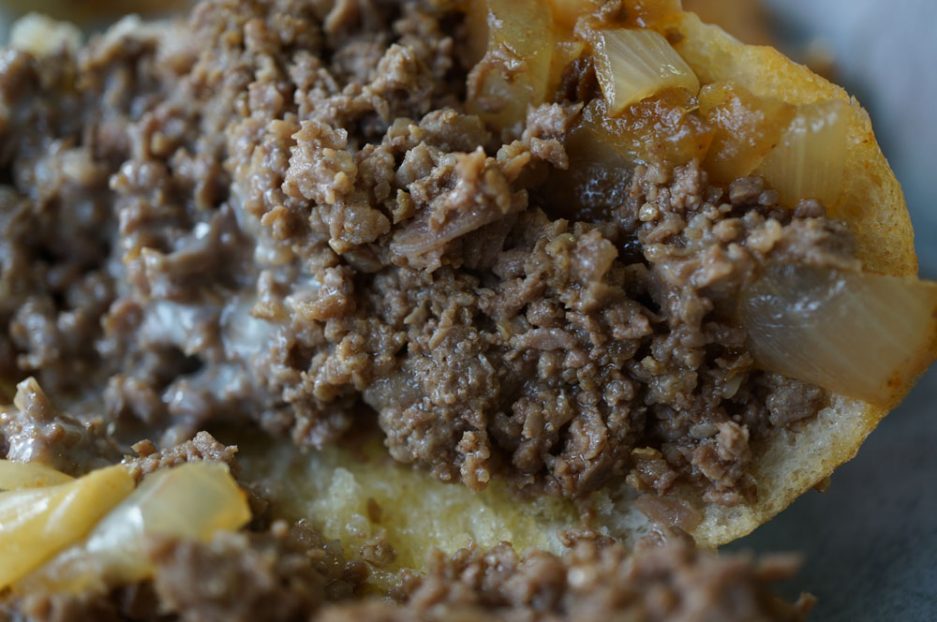 That finely chopped steak makes it easy for the cheese to integrate with the meat. 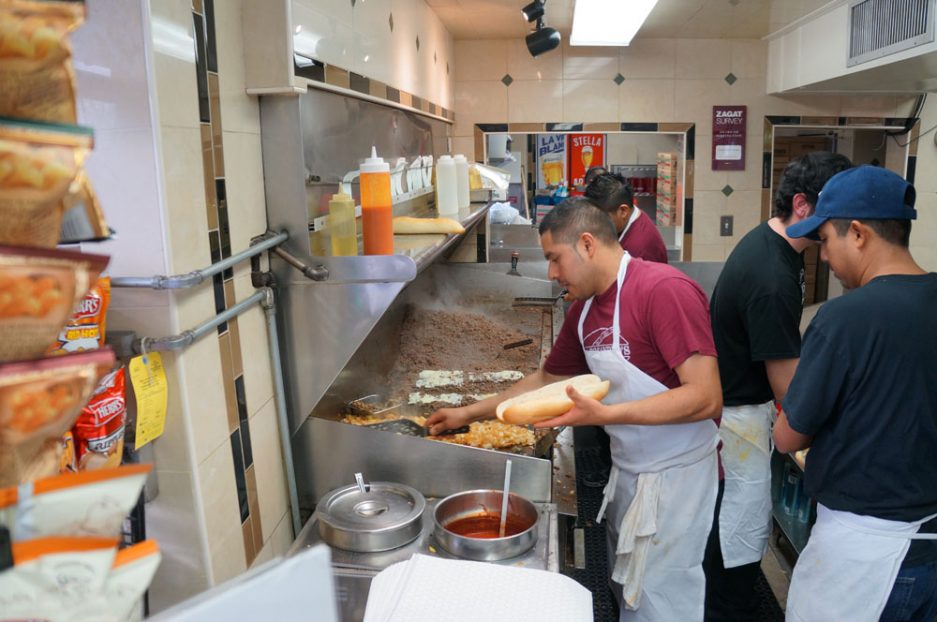 The mountain of meat. 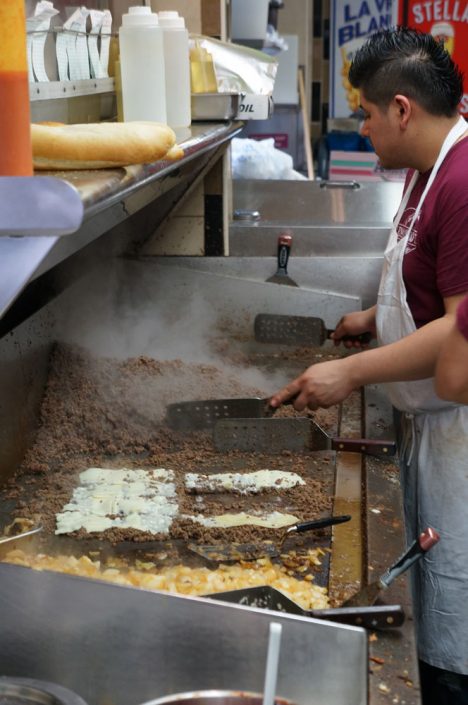 Cheese melting into the steaks. 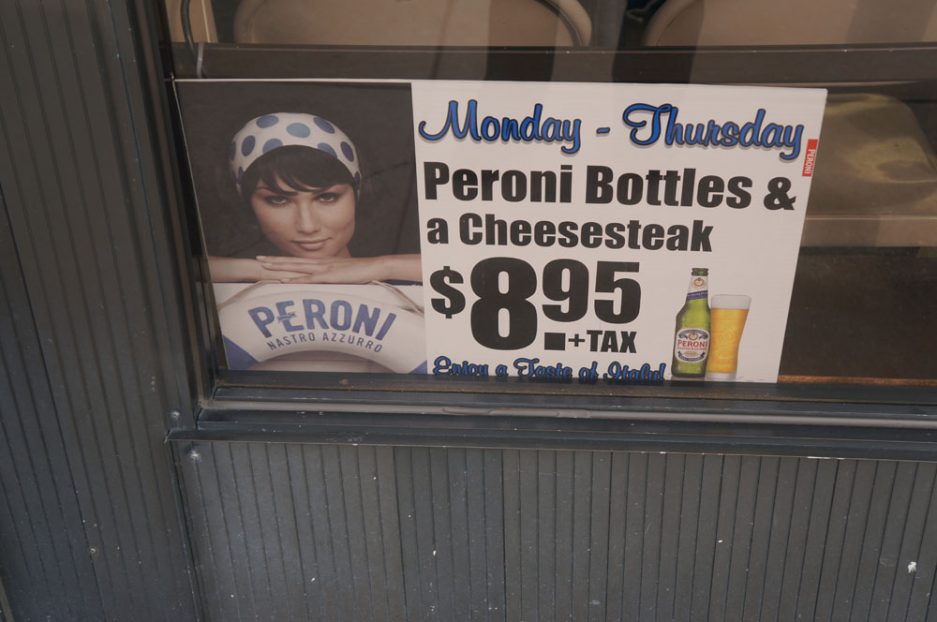 A cheesesteak deal Monday through Thursday. 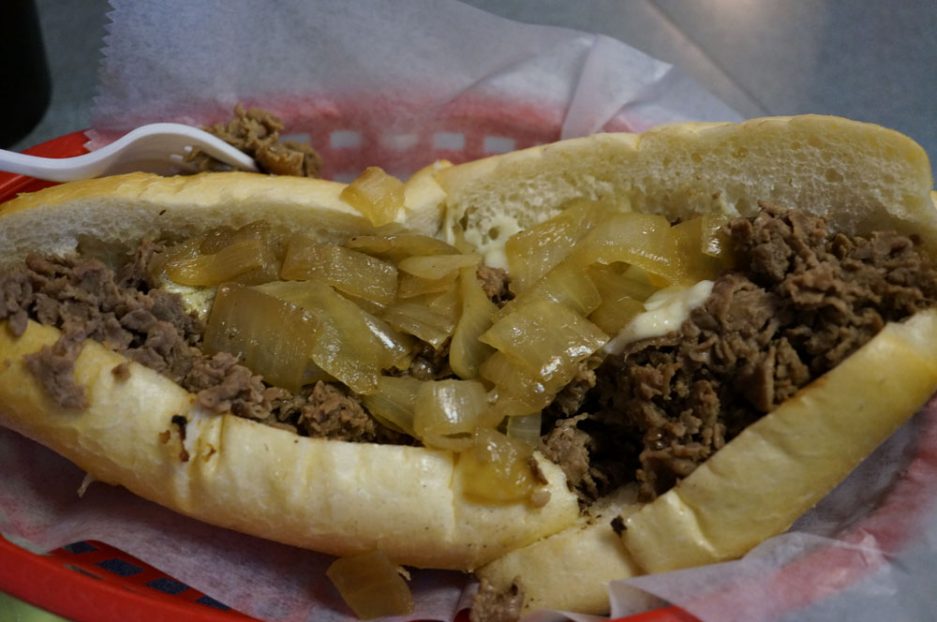 A short and terrifying jaywalk across Henry is Chubby's. 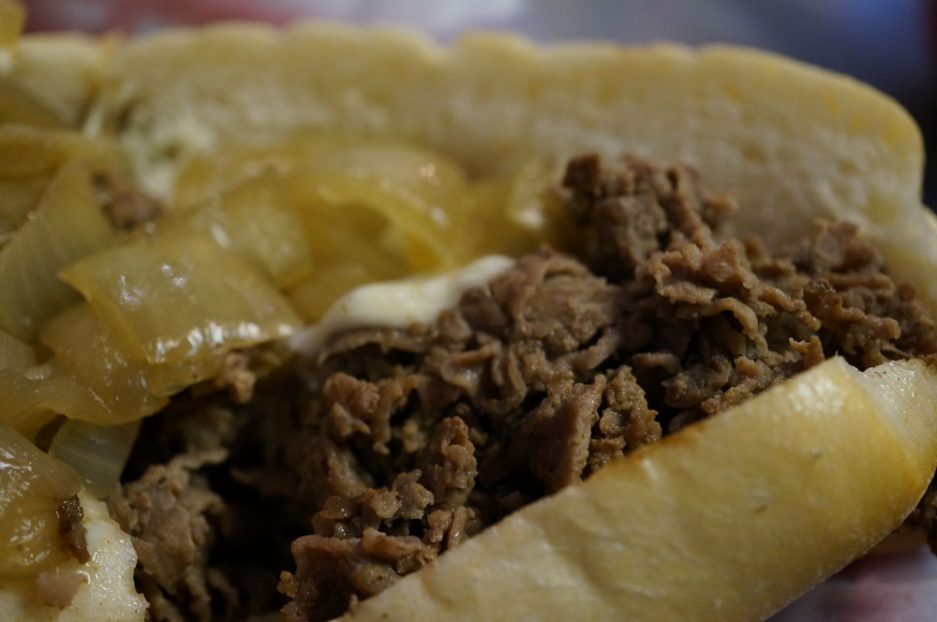 Coarser chopped meat at Chubby's. The cheese isn't as melted throughout the steak. 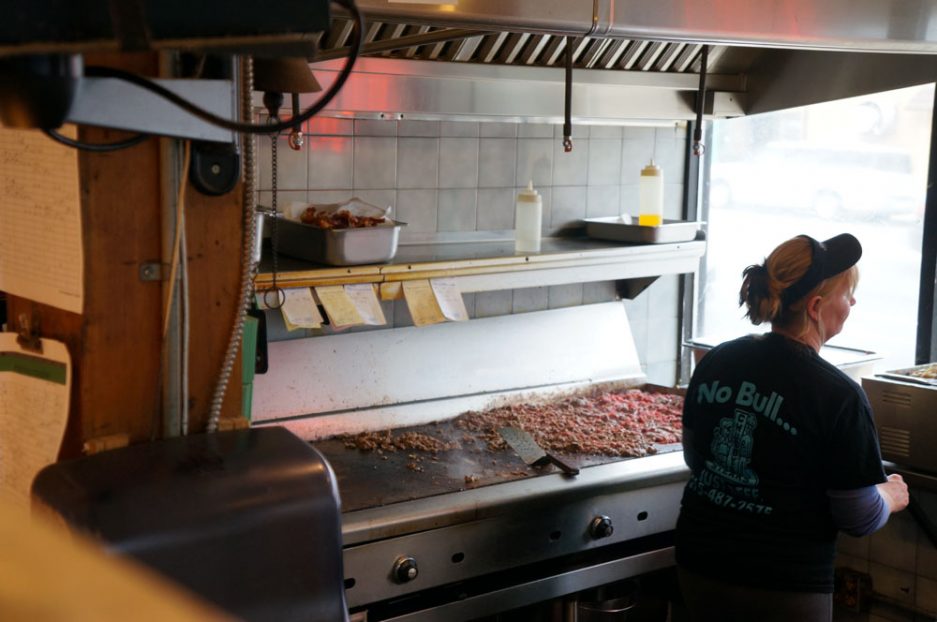 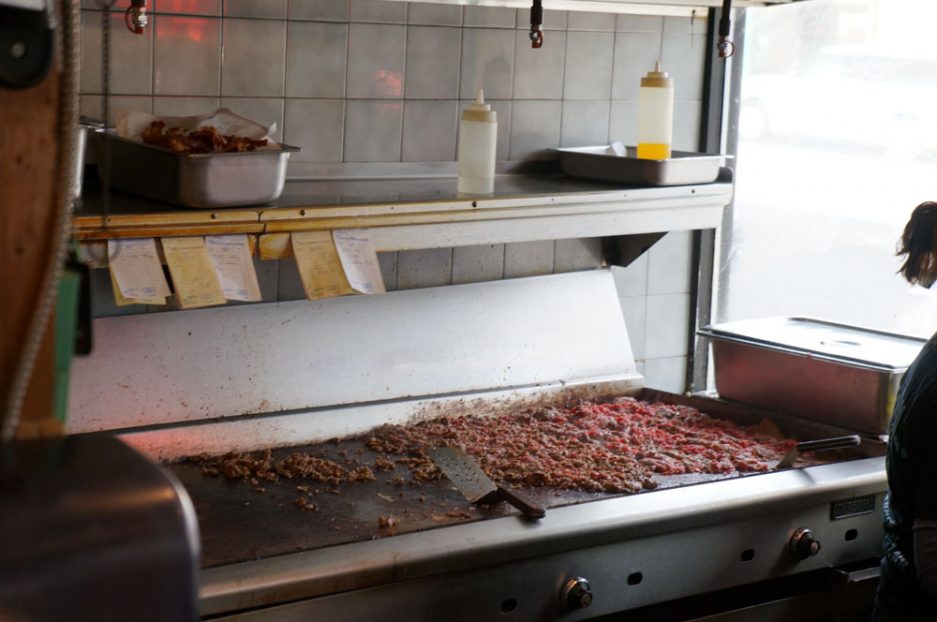 The steak spectrum from raw to ready.