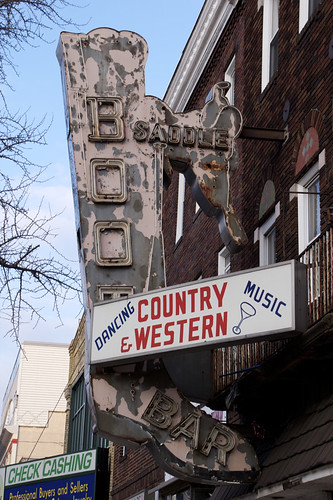 Today’ Metro has a story on Avram Hornik’s plan for resurrecting the long-closed Boot & Saddle Bar at Broad and Ellsworth and the resistance it has already received from the South Broad Street Neighbors Association (SBSNA).

“We’re not thrilled about it,” said [SBSNA] President Peter Zutter, who heard Hornik present plans at an Oct. 18 community meeting. “We’re familiar with his other locations and it’s not really the kind of development we want to see on that part of Broad Street.”

The neighbors association promises to fight the liquor license transfer.

Us, we imagine a day when a newly re-lit neon boot beckons life back to a neglected commercial block. It’s proximity to the Broad Street line making it a great meeting place before or after a sporting event at the stadium complex. Hell, we might even try to line dance.