The Eagles used a loophole Monday to best set themselves up to pull off a playoff upset. 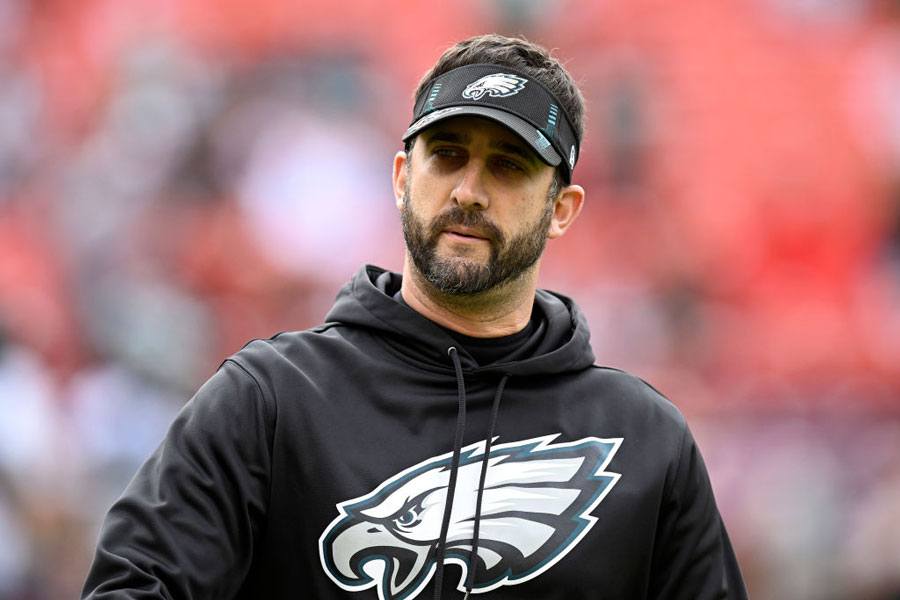 Head coach Nick Sirianni on the field during pre-game before the game against the Washington Football Team at FedExField on January 02, 2022. / Photograph by Greg Fiume / Stringer via Getty Images

Nick Sirianni didn’t want to talk about it but the Eagles flashed their hand when it comes to Saturday night’s regular-season finale against the Dallas Cowboys.

When things broke Philadelphia’s way over the weekend and an ugly 2-5 start to the 2021-22 campaign officially turned into a playoff berth at 9-7, the Eagles’ final game before the playoffs took on somewhat of an afterthought feel.

Sure, there is a minor chance Philadelphia could move up to the sixth seed. And there is some jockeying that needs to be done in many cities before the Eagles’ will know who their first-round playoff foe will be, with four potential options: Tampa Bay, the L.A. Rams, Arizona, and Dallas in order from most likely to least likely.

Sirianni assuming he can control any of that is not worth the time mulling over, so the most likely path for Philadelphia is resting as many key contributors as possible, even if it means sacrificing a game against the fan base’s most-hated rival in Dallas, which insists it will be playing to win even if moving off the No. 4 seed for the Cowboys is also unlikely.

The Eagles, quite simply, have bigger fish to fry, and maximizing the path to a first-round upset should be the primary goal.

As of Monday afternoon, Sirianni claimed no decision had been made.

“We’ll keep everything on the table,” the Eagles head coach said. “Not quite sure what we’re going to do yet.”

Understand the recently shifted league protocols mean vaccinated players do not have to be tested any longer unless they are symptomatic, randomly chosen, or volunteer.

The immediate thought from a number of sources around the league was that the Eagles were taking advantage of a loophole with the playoffs on the horizon. By convincing players to test on Monday of a game week, the new five-day clock would ensure no one would miss a game unless they were truly struggling with the virus.

Meanwhile, anyone testing positive will not be tested again for 90 days meaning the 12 players who did on Monday are cleared through even an unlikely run to the Super Bowl.

If Philadelphia takes a similar approach next Monday, the same will be true for any potential positive tests. Those players will more than likely be cleared for the playoff game and not tested again no matter how far the Eagles might advance.

The other part of this is that players no longer have to test out of the protocols. A doctor clearing them as symptom-free is all that’s needed now so the Eagles could stash players on the list for Saturday’s game and in turn elevate practice-squad players.

The game-day roster size of 47 means certain players have to play even if you don’t want them to and the COVID positives are actually a help in advancing the goal of resting key players who did test positive.

Sirianni noted that he has been a part of six or seven play-in games for postseason berths and only one team that clinched early when he was an assistant in Kansas City under Todd Haley.

That came in 2010 when the Chiefs played to win despite clinching a division title the week prior. Kansas City lost the game and was also bounced in the first round of the playoffs.

Defensive coordinator Jonathan Gannon threw out one of his go-to sentiments.

“Be where your feet are,” Gannon said. “Dallas, man, Dallas.”

And that’s where a good organization can help each other. By the nature of their jobs, the coaches almost have to worry about what’s right in front of them and that’s the Cowboys.

“You don’t look too far ahead, you don’t look too far behind,” Sirianni said. “You think about each day, what you have to get done that day. That’s been our model all year. That’s been what we’ve done all year. Keeping it one game at a time. We have to be able to go out and put our best foot forward and be ready to win this football game against a good football team in Dallas.”

GM Howie Roseman, however, can think about the future and he unveiled a solid strategy to best maximize the Eagles’ chances when the playoffs do arrive.