Eagles vs. Washington Football Team: By the Numbers 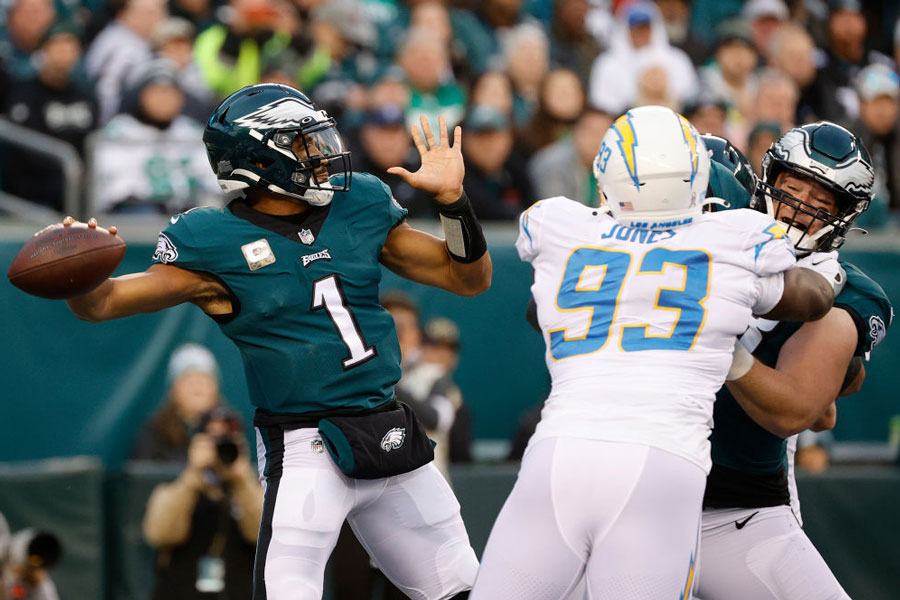 All the numbers you need to know going into the Eagles vs. Washington game Sunday. / Photograph by Tim Nwachukwu / Staff via Getty Images

There is no mistaking the identity of the Eagles offense right now. They are a running, ground-and-pound team and have been ever since head coach Nick Sirianni flipped the script in early November.

They lead the league in rushing, averaging 160.0 yards per game on the ground. In the last six games, they’ve averaged 210.5.

The Eagles are facing a Washington defense Tuesday that, as of Friday morning, had 21 players on its COVID list, including 14 on defense. It won’t make any difference whether any of those 14 play or not. The Eagles still will be running the ball. A lot.

Before it was ravaged by positive COVID tests, Washington had one of the league’s better run defenses. They were fifth in rushing yards allowed (93.6 per game) and seventh in opponent rush average (4.0). In their last five games, they’ve allowed just 10 runs of 10 yards or more. The Eagles lead the league in 10-plus yard runs (63), including 27 by quarterback Jalen Hurts.

The Eagles have one of the league’s most dominant offensive lines and believe they can run the ball against anybody right now, particularly with Hurts, who is 16th in the league in rushing with 695 yards and tied for fifth in rushing first downs with 50.

Washington has done a pretty good job against mobile quarterbacks this season. The Giants’ Daniel Jones rushed for 95 yards on nine carries against WFT in Week 2, but it held the Bills’ Josh Allen to nine yards on four carries in Week 3.

But the Seahawks’ Russell Wilson ran the ball just twice against them (for 16 yards) and the Cowboys’ Dak Prescott had just 15 yards on seven carries in a seven-point win last week.

The Eagles are averaging 31.7 rushing attempts per game through 13 games. If they continue to average 40-plus carries in their final four games, they could end up averaging 34 rushing attempts for the year. The last time they did that was 1981 when Wilbert Montgomery and Co. averaged 34.9 per game

But Washington’s defense has been much improved on third down during their recent resurgence. In its first eight games, six of which Washington lost, opponents converted 56.5% of their third downs (65 of 115). Opposing QBs had a sky-high 133.5 third-down passer rating that included a 70.6 completion percentage and 11 TDs. Forty-nine of 85 third-down pass attempts (57.6%) resulted in first downs.

In the last five games, though, opposing QBs have had an 85.7 third-down passer rating v. Washington, including a 45.0 completion percentage and just 13 first downs on 40 pass attempts (32.5%). Opponents averaged 5.24 yards per carry on third down in Washington’s first eight games. In the last five: 2.79.