The Philadelphia coaching staff is preparing for new looks over the next few weeks in an effort to slow down what has been a dominant running game. 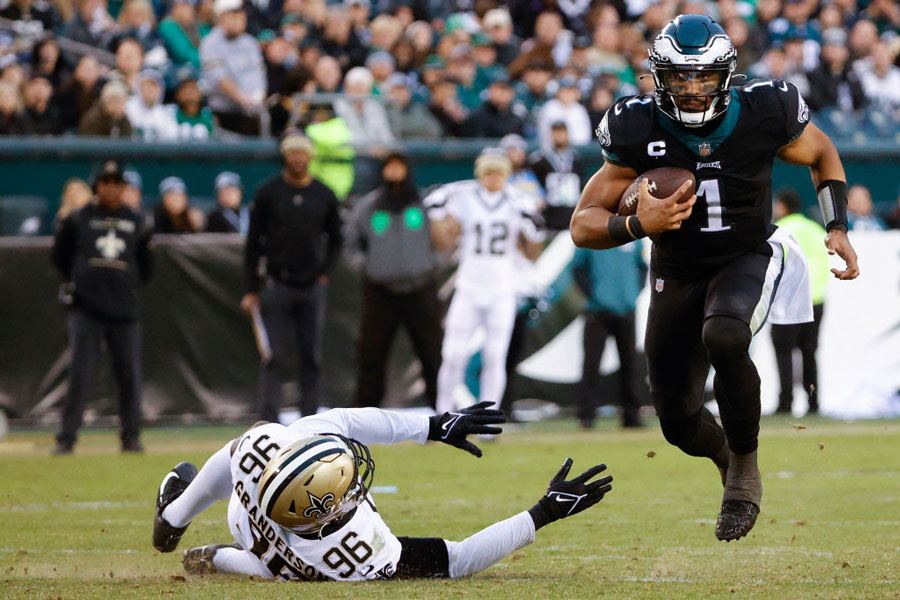 ‘Unique’ and ‘special’ are just some of the adjectives that the Eagles coaching staff have used to describe second-year quarterback Jalen Hurts over the past month, as the team’s running game has ramped up to a historic degree.

In a pass-happy era of NFL football, the Eagles have started zigging to counteract the zag groupthink that pervades the league.

It’s a numbers game, according to Shane Steichen.

Over the past four games, the Eagles offense has had three 200-yard rushing performances and is averaging 217.5 run yards per game over that span with a low-water mark of 176. Overall they are now second in the league when it comes to running the football.

In Sunday’s 40-29 win over New Orleans — which came in as the top-ranked run defense in the NFL, allowing just 72.9 yards on the ground per contest — the final number was a jaw-dropping 242.

Everyone has been contributing, starting with a dominant offensive line and running backs Miles Sanders, Jordan Howard, and Boston Scott. But it all starts with Hurts.

With traditional offenses, a defensive unit doesn’t have to account for the QB on running plays, but with Hurts and other top-tier running QBs like Baltimore’s Lamar Jackson, the en vogue technique is to scrape a linebacker over the top of the unblocked edge player in read-option or zone-read looks in order to account for the extra threat of the quarterback keeper.

Doing that, however, leaves poor angles for between-the-tackles runners like Howard, who has been surprisingly effective before spraining his knee against the Saints.

Next up for the Eagles is the struggling New York Giants, who fired offensive coordinator Jason Garrett on Tuesday after a disappointing Monday night loss in Tampa.

With little to lose, Philly native Joe Judge and his defensive coordinator Patrick Graham might be the ones willing to force Hurts to beat them through the air.

“Well, I think possibly they can put an extra defender in the box, try to load the box up a little bit,” Steichen said.

The Eagles are trying to be as proactive as possible to the adjustments they know are coming as Philadelphia tries to make an unexpected playoff push over the next seven weeks.

“And without getting into too much scheme, if things like that happen within the game, we have great coaches and we do great sideline adjustments to get that right.”