Eagles vs. Chargers: By the Numbers

Did the Eagles find a successful formula last week in Detroit — or are the Chargers ready to snap a two-game skid? 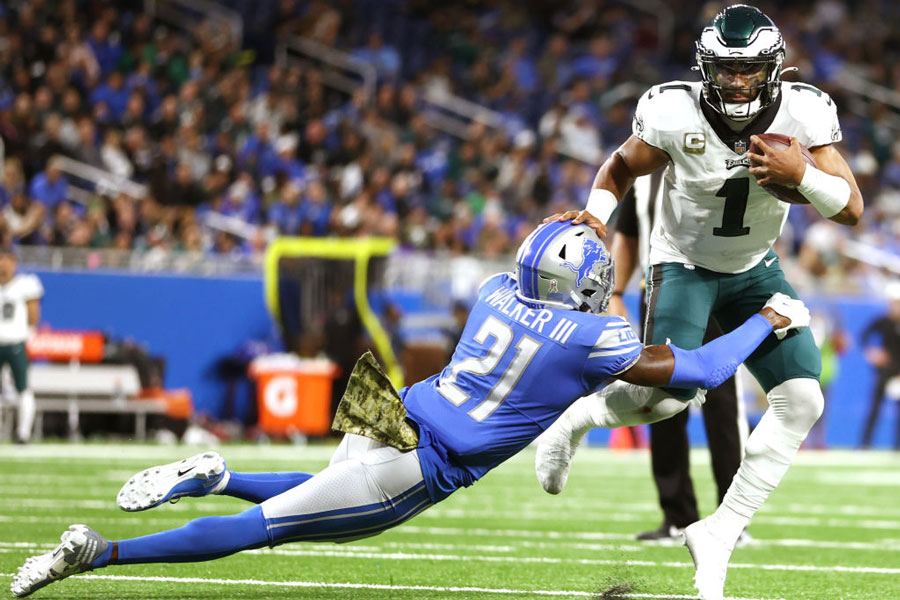 Jalen Hurts runs the ball and is tackled by Tracy Walker III of the Detroit Lions during the game at Ford Field on October 31st. / Photograph by Gregory Shamus / Staff via Getty Images

Despite the absence of Miles Sanders, who is on injured reserve with an ankle injury, the Eagles ran the ball 46 times for 236 yards and four touchdowns Sunday in their lopsided 44-6 win over the Lions.

The Eagles are going to need to make a similar type of commitment to the run Sunday when they face the 4-3 Los Angeles Chargers at the Linc. Maybe not 40-plus carries. Maybe not just 16 passes. But definitely a pound-the-rock mentality again.

And if Jonathan Gannon’s defense can just prevent Justin Herbert and the Chargers offense from jumping out to an early double-digit lead, the Eagles should be able to do that.

The Chargers, like the Lions, can’t stop the run. They are last in the league in both rush yards allowed per game (159.6) and opponent rush average (5.1). They have given up the fifth-most runs of 10-plus yards (27). The Eagles’ offense has the second most 10-yard runs (32). Only the Cleveland Browns have more (41).

In their three losses to Dallas, Baltimore, and New England, the Chargers were gashed for 527 yards on 108 carries. That’s 175.7 yards per game and 4.9 yards per carry. They’ve given up at least nine rushing first downs in five of their seven games. Clearly, the best way to beat the Chargers is on the ground.

In Sunday’s win over the Lions, the Eagles had 19 rushing first downs. That’s their most in a game in at least the last 40 years.

Jordan Howard, who was promoted from the practice squad and saw his first action of the season, had six of those 19 first downs. Boston Scott had five, Jalen Hurts had four, and Kenny Gainwell and Jalen Reagor each had two.

Reagor was used on a jet sweep and an end-around on the Eagles’ second possession. The jet sweep gained 11 yards and the end-around gained 10. Look for him to be used more in a gadget role as the season goes along.

The Eagles are fourth in the league in rush average (5.0) and seventh in rushing yards per game (131.6). Quarterback Jalen Hurts obviously has had a lot to do with that.

Hurts leads the Eagles in rushing with 432 yards and five touchdowns on 73 carries. He is tied for fourth in the league in rushing first downs with 29. The only three players with more: the Titans’ Derrick Henry and the Colts’ Jonathan Taylor (both with 49), and the Cowboys’ Ezekiel Elliott (30).

Hurts is tied for fifth in rushing touchdowns, behind Henry (10), Taylor and the Cardinals’ James Conner (both 8), and the Patriots’ Damien Harris (6). He’s also tied for sixth in 10-plus-yard runs with 15.

The Eagles used a lot of multiple-tight end personnel groupings against the Lions. They used 12- and 13-personnel on 35 of 62 plays (56.4%). That’s far and away the most they’ve used “heavy” sets this season. Twenty-two of their 46 rushing attempts were with 12P. Seven more were with 13P. Tight ends Dallas Goedert, Jack Stoll and Richard Rodgers played a combined 110 snaps.

Only time will tell whether the tight end-heavy sets are something Nick Sirianni wants to use a lot going forward or whether it was specifically aimed at the Lions’ defense.

In the Eagles’ five losses this season, opposing quarterbacks lit them up, throwing 13 touchdown passes, completing 81.5 percent of their attempts, and averaging 8.2 yards per attempt. The Eagles had just five sacks in those five losses.

In the Eagles’ three wins over the Falcons, Panthers and Lions, the Eagles’ pass-defense numbers were considerably better: one TD pass allowed, 63.2 opponent completion percentage, 5.3 yards allowed per attempt, and 12 sacks.

On Sunday, they did a good job against the Lions’ Jared Goff. They didn’t give up a TD pass and sacked him six times. That’s the most sacks they’ve had in a game for the defense since Week 3 of last season when they recorded eight in a 23-23 tie with Cincinnati.

The Chargers’ Justin Herbert will be a tougher challenge than Goff. Herbert threw 31 touchdown passes last year and was the league’s Offensive Rookie of the year.

He had 13 TD passes and just three interceptions in the Chargers’ first five games this season, four of which they won. But he has not been nearly as sharp in back-to-back losses to the Ravens and Patriots, completing just 54.0 percent of his throws, averaging 5.6 yards per attempts, and throwing three interceptions.

Jonathan Gannon has been focused on not giving up the deep ball and has been successful in that respect. The Eagles have given up just 10 pass plays of 25 yards or more. That’s the fifth-fewest in the league. Herbert and the Chargers are 25th in 25-plus-yard plays (11).

The Eagles ran four screens Sunday, including three to tight ends (two to Goedert, one to Stoll). The screens gained 19 yards. In the previous three games, the Eagles ran nine screens and lost three yards.

The Eagles are 13th in third-down offense (41.1%). Hurts has a 94.6 third-down passer rating. He’s completed just 53.6 percent of his third-down passes. Hurts has an 88.0 passer rating on third downs of five yards or less, including a 48.1 completion percentage. There are only three quarterbacks in the league with a lower completion percentage on third-and-five-or less: the Redskins’ Taylor Heinicke (47.8), the Panthers’ Sam Darnold (45.5), and, surprisingly, the Cardinals’ Kyler Murray (38.1).

The Eagles are 26th in third-down defense. Opponents have converted 43.6 percent of their third-down opportunities against them. In the last seven games, opposing quarterbacks have completed 35 of 50 passes (70.0) against them on third down. Twenty-five of those 50 third-down throws have produced first downs.

Opponents have converted 63 percent of their third downs of five yards or less against the Eagles. That’s the seventh-highest rate in the league. The only good news: the Chargers are even worse on third-and five-or less (67.4%).