Impressive Depth on the Eagles’ Offensive Line to be Tested Again

The latest loss for Jeff Stoutland's impressive offensive line is Jack Driscoll, who is done for the season with a high-ankle sprain. 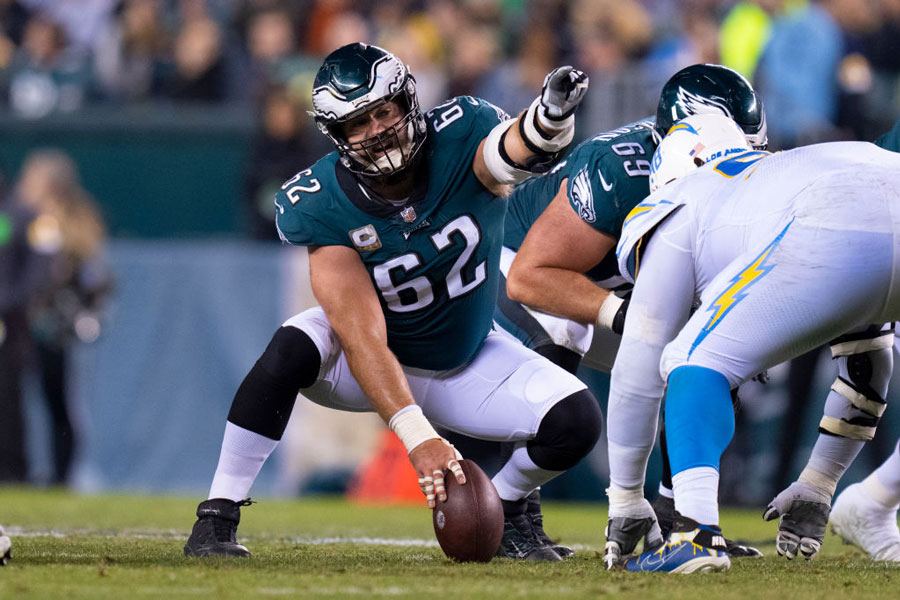 The injuries on the Eagles offensive line have tested an impressively deep unit. Here, Jason Kelce points against the Los Angeles Chargers at Lincoln Financial Field on November 7, 2021. / Photograph by Mitchell Leff / Contributor via Getty Images

At some point, the attrition on the Eagles’ offensive line is going to take its toll.

The latest loss for Philadelphia is right guard Jack Driscoll, who was performing well in place of rookie Landon Dickerson, who had been filling in for All-Pro Brandon Brooks, who remains on injured reserve with a pec strain past the expected eight week-rehab period and will not be addressed until after the team’s late-season bye week which begins after Sunday’s game at the New York Jets.

Dickerson had to move to left guard when the original starter there, Isaac Seumalo, was lost for the season with a Lisfranc injury, which had opened the door for Driscoll, who was officially placed on the IR Tuesday for the second time with an ankle injury suffered during the 13-7 loss to the New York Giants over the weekend.

“Jack’s played really good football, but Nate Herbig, he’s been here for a while,” offensive coordinator Shane Steichen said Tuesday. “He’s stepped in. He’s played the center position. He’s played the guard position, and he prepares every week. You see him in the meetings asking really good questions. He’s tough.”

Herbig himself had to fill in for center Jason Kelce (knee) against the Giants before Kelce willed himself back into the game and Driscoll went down forcing offensive line coach Jeff Stoutland to break the glass around Herby for a second time over the same 60 minutes.

And we haven’t even gotten to the tackles: Jordan Mailata has missed time with a sprained knee and Lane Johnson with mental-health struggles. That’s forced Andre Dillard back into the lineup at left tackle for a bit, Mailata to toggle from left to right and back to left, depending on who the other bookend was when he was up, and Driscoll sliding out to RT when Mailata wasn’t available.

Oh and Brett Toth, who was promoted back to the active roster from the practice squad on Tuesday to replace Driscoll, also played 14 snaps at the end of the Halloween blowout in Detroit.

The Eagles’ projected starting offensive line against the Jets — Mailata, Dickerson, Kelce, Herbig, and Johnson — will be their 20th different group in the 29 games since Week 1 of the 2020 campaign, upsetting what had been a rare extended period of cohesion with the same five players for six consecutive games.

During that time the Eagles have rushed for 200 yards four different times, with the line proving to be the strength of the team despite all the moving parts.

The Week 1 starting group of Mailata, Seumalo, Kelce, Brooks, and Johnson would have almost surely quickly developed into the top OL in the NFL with four potential All-Pro candidates.

#Eagles LT Jordan Mailata was RIDICULOUS on Sunday. Every physical trait you could imagine up front. His impact is felt every time you turn the tape on, but especially so in this game #FlyEaglesFly

Tune into #PHIvsNYJ | Dec. 5th at 1:00 PM on CBS pic.twitter.com/xfVNAFNWCG

True 'Welcome to the NFL' game for Ojulari going against Lane. RT1 put on another show. Check out how he mixed up his set at the :10 second mark too. It's fun watching elite players. pic.twitter.com/TwDZZaiGqT

The downside has been a top-five OL, a testament to Stoutland’s ever-burgeoning reputation as one of the best position coaches in the NFL.

According to the independent grading site ProFootballFocus.com Kelce is No. 3 of the 39 OCs that have played enough to be graded. At OG, Driscoll is No. 21 of 81 while Dickerson is No. 32 and Herbig 34. Mailata is the fourth-best OT, Johnson is No. 19 and Dillard is No. 40.

Add in the veteran stars who didn’t play enough to be rated — Brooks and Seumalo — and the Eagles have proven to have nine starting-caliber offensive linemen in a league where most teams can’t find five.