A shift toward a run-heavy offense has kickstarted the evolution of Jalen Hurts as an NFL quarterback. 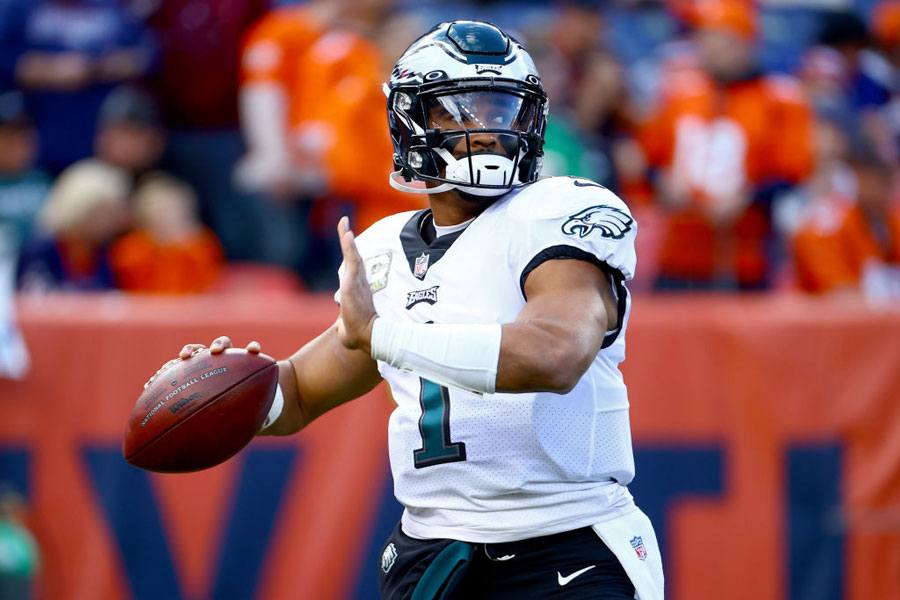 Jalen Hurts warms up before a game against the Denver Broncos at Empower Field At Mile High on November 14, 2021. / Photograph by Jamie Schwaberow / Stringer via Getty Images

Jalen Hurts may or may not be the long-term answer for the Eagles at the quarterback position.

That future is still being determined but the thought that Hurts could be a one-and-done guy as the Eagles picked up steam last Thursday night when general manager Howie Roseman took the short trip to Western Pennsylvania to take in Pitt’s Kenny Pickett, a fast-riser with NFL personnel people when it comes to the 2022 draft.

Less than 72 hours later, however, Hurts was putting together the best half of football during his young professional career in Denver, a maestro-level performance in which the second-year signal-caller began the game 15-of-20 for 176 yards, two touchdowns, with a 134.6 passer rating en route to a 30-13 win, numbers that would have only been bolstered if Quez Watkins didn’t drop Hurts’ best pass of the afternoon, a dime that would have been a 34-yard touchdown late in the second quarter.

“He played really good football,” offensive coordinator Shane Steichen said of Hurts Tuesday at the NovaCare Complex. “And I think the whole offense, as a whole, played the best football we played in the first half.”

After the game, though, Hurts seemed surprised that some would see his performance as his best to date.

“Is that what they’re saying?” the QB asked rhetorically before doing what he always does, defaulting to the learning process through the good and bad, whether the contest ends as a win or a loss.

“Like I said, scoring on the first drive is very important to me,” Hurts said. “That’s something we didn’t do. I think they presented some different looks to us, sent a lot of pressure at moments in the game. I think there were highs, and the lows. The good, bad, and the ugly, we’re going to learn from it. I’m going to continue to learn from it and grow from it.”

Head coach Nick Sirianni, however, has seen significant improvement from the season-opening win in Atlanta through the Week 10 triumph in the Rocky Mountains, highlighting one particular play to show the growth, a 24-yard strike to tight end Dallas Goedert on a 3rd-and-12 play in which Hurts showed tremendous pocket presence instead of just bailing on the play.

“I think if you look back and you look maybe five weeks ago, I think that he probably tucks that and runs and maybe gets 10, right?” said the coach. “And (Sunday), he stepped up in the pocket, he stepped up with two hands on the football – I mean, and look how good he’s done taking care of the football just as far as interceptions and fumbles, right?

“He steps up in the pocket, he rips through, he slides in the pocket, keeps his eyes down the field, and then he delivers a strike across the middle.”

Sirianni described the sequence as a “big-time football play” for a QB that is starting to make the turn from unique project to bonafide starter.

Steichen also noted the improvement in that all-important aspect to playing the position.

“I think just within the pocket, he’s still making those plays outside the pocket, but you can see him stepping up in the pocket,” Steichen added. “He had one in the two-minute drive he threw to [WR Jalen] Reagor down the sidelines, a stop route. He stayed in there and got drilled. I mean, that’s great strides right there, seeing that, making those big-time throws.”

To date, Hurts had 13 touchdown passes vs. five interceptions and a lost fumble, drastically improving his ball security from his limited playing time during his rookie season. Furthermore, his unique playmaking abilities are now creating headaches for opposing defenses.

Over the last three games in which Hurts and the Eagles’ offense have seemingly carved out an identity with a run-heavy approach, he’s completed 66.7 percent of his throws (36-for-54) and is ranked in the top 10 of all QBs in a host of important categories: first in rushing yards (186), second in passer rating (102.6), third in passing yards/attempt (8.2), and eighth in total first downs (36).

“I just see his arrow completely pointed up,” Sirianni said. “I think we’ve all seen the way he’s played.”

“… All the rookie quarterbacks in [the 2021 draft] class are at about 10 games right now. At the most, nine or 10. So, to me, it’s, like, well, he’s still a rookie, right? He’s still in his rookie season and — essentially if you count the number of games started. And so, all I see is improvement every day from him because, again, it starts with the type of person that Jalen is and how much he loves this sport and how much he loves his teammates, and how tough he is. And he doesn’t make the same mistake twice.”