The Eagles’ rookie defensive coordinator took some lumps after back-to-back poor performances. A better outing offered an opportunity to hit the rewind button. 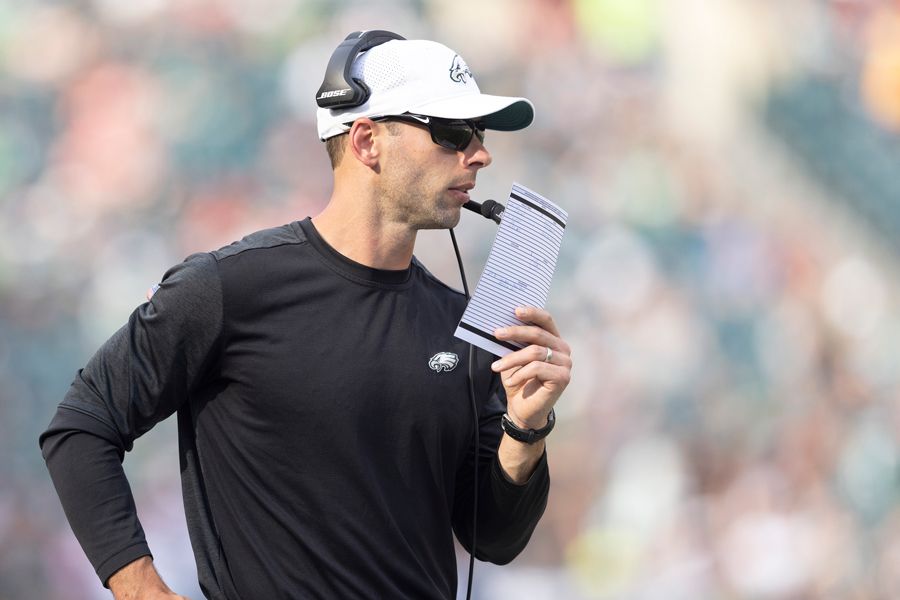 Eagles rookie coordinator Jonathan Gannon learned about life in an uber-passionate football city while coming off his defense’s back-to-back subpar performances against two explosive offenses in Dallas and Kansas City.

Semantics had a lot to do with the uneducated hits Gannon was taking, and after righting the ship last Sunday in Charlotte against the Carolina Panthers, he hit the rewind button to add some context to two particular quotes that turned into an old-school game of telephone.

“We’re not a dime team, right now,” was shortened by the final two words by far too many critics, and Gannon’s hiccup of “we don’t have a scheme” was better explained on Tuesday in advance of a short-week showdown with the reigning Super Bowl champion Tampa Bay Buccaneers.

“I was thinking about last week with your question, you know, the we don’t have a scheme. Let me clarify, you guys, what that really means to me is, like an offensive guy says, ‘Well, I’m a West Coast guy.’ Well, if you have Tom Brady, you’re not going to run a West Coast offense, right?” Gannon said.

“I never really wanted — being on different defenses that I’ve been on, I never wanted to be labeled as, you know, a ‘Tampa 2 guy’ or a ‘Seattle 3 guy’ or a ‘pressure guy’ because, yeah, those things can be good and some of those defenses have been really good, some of those teams that are known for playing that style,” Gannon continued. “But if it doesn’t match up with the people that you have in your building or if it doesn’t match up versus the people you are playing, good luck.”

Boiled down even further, Gannon doesn’t believe in pounding the square peg in the round hole, and malleable is never a bad adjective to describe a football coach.

“The whole non-scheme thing, that’s really just saying, ‘Hey, each week we want to be able to adapt and adjust, putting our guys in a position to be able to make as many plays as possible with the offense that we are playing,’” said Gannon.

Gannon learned from his mistake and now understands how perception can overwhelm reality in Philadelphia.

“I kind of flubbed up over that,” Gannon admitted, “and I have said right from the jump, like, ‘We don’t have a scheme.’ Well, obviously, we have a scheme, but the point of that is — and that’s where it’s awesome to be around the guys that we have — is we play differently week-to-week.”

Those differences can be subtle to the naked eye.

“Sometimes it might not look drastically different, but what’s going on pre-snap and post-snap, it really is,” he said. “And sometimes it’s really good. Our guys execute, and we put them in the right spot, and sometimes, obviously, we have to improve. Like a couple of weeks ago, we got to do a better job of putting them in better spots and executing better. Again, everyone kind of runs the same stuff. It’s who you have in your building and who you are defending that’s put our guys in the best position possible to make a bunch of plays.”

On Sunday against the Panthers, Gannon’s defense recorded three sacks, eight hurries, six tackles for losses, and three interceptions. The reaction was more “that’s what you’re supposed to do” than a pat on the back. And the reward is seven-time Super Bowl winner Tom Brady and the reigning champs, more Patrick Mahomes and the Chiefs than Sam Darnold and the Panthers.

“Obviously, they’re big-time, big-time, but so is every offense,” Gannon noted. “Every offense that you play in the NFL, there is no let-down. There are good players all across each team.”