The 1980s wide receiver turned radio announcer on the biggest difference in the game today and his take on this year’s team. 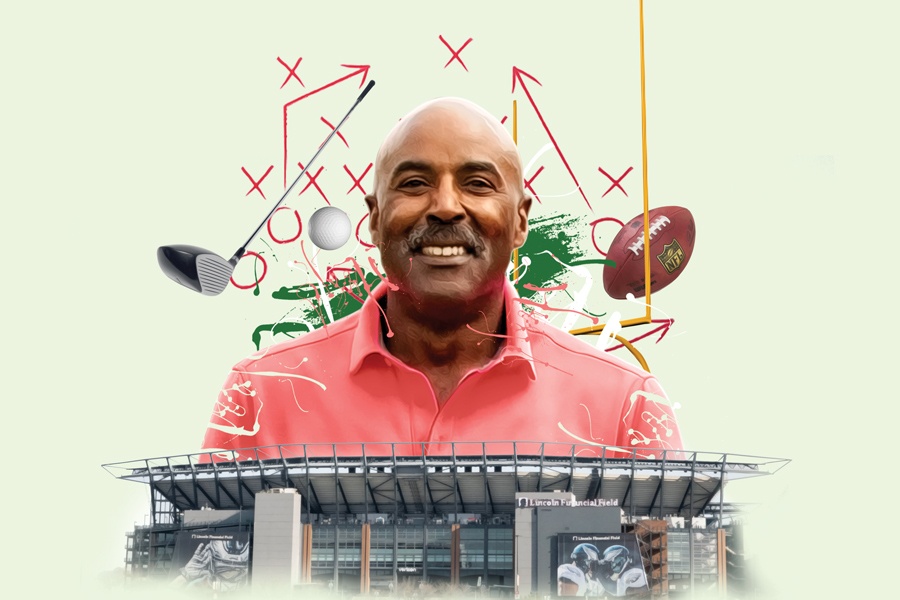 My full name is … Michael Anthony Quick, but in my family, I’m known as Tony.

I grew up in … Hamlet, North Carolina, the birthplace of John Coltrane. A place that time forgot.

When I was a kid, I wanted to grow up to be … away from Hamlet.

My first job in life was … doing lawns, but I was working in tobacco fields with my siblings — there were 10 of us — by the time I was 11.

I came to Philly … in 1982, when I was the Eagles’ number one draft pick. I was sitting in my apartment in Raleigh when I got the call.

When I first got here, I thought Philly was … overwhelming.

My biggest play was … my walk-off 99-yard touchdown with Ron Jaworski vs. the Atlanta Falcons in overtime in ’85. It’s an NFL record, and one that will never be broken unless they change the dimensions of the field. It’s been tied, but Jaworski says ours was longer because it was 99 and three-quarter yards.

The closest my team ever got to the Super Bowl was … the infamous Fog Bowl during the 1988 playoffs. It was in Chicago. We lost to the Bears. We couldn’t utilize our strength, which was throwing the ball, because Randall Cunningham couldn’t find the guys down the field due to the terrible fog.

Playing in the Vet was … fantastic. We had an edge, because teams knew they were gonna catch hell from our fans. And the fans didn’t disappoint.

My second favorite sport is … golf. Depending on the season, I play three or four days a week.

My favorite book about sports is … Big A, one of the first sports books I read as a kid. It’s all about the early days of Lew Alcindor, before he became known as Kareem Abdul-Jabbar. A janky, dorky youth who was taller than everybody, but he developed this thing called the skyhook.

During Eagles season, you will find me … calling every single game on 94.1 WIP with the great Merrill Reese. We’ve been calling the games for 24 years. God has been good to me.

The toughest thing about calling the games is … having to be critical of people when you know the work that goes into the game.

One day, I would like to travel to … the motherland, Africa.

The biggest change between the game now and when I played is … the compensation. My biggest contract was $1.3 million. That same talent today could make $20 million without a problem. And good for them.

People would be surprised to know … that if you walk through my house in Marlton, there’s probably not a single thing there that tells you I played in the NFL. I don’t have prized memorabilia on display.

When we won the Super Bowl in 2018 … I had to make sure I wasn’t dreaming. I called the Super Bowl with Merrill from the stadium in Minnesota, and it was one of the most special moments of my life. I had to pinch myself.

Published as “One of Us: Mike Quick” in the September 2021 issue of Philadelphia magazine.