On March 1, 2007, Milton Street held the greatest press conference in Philadelphia political history. We look back. 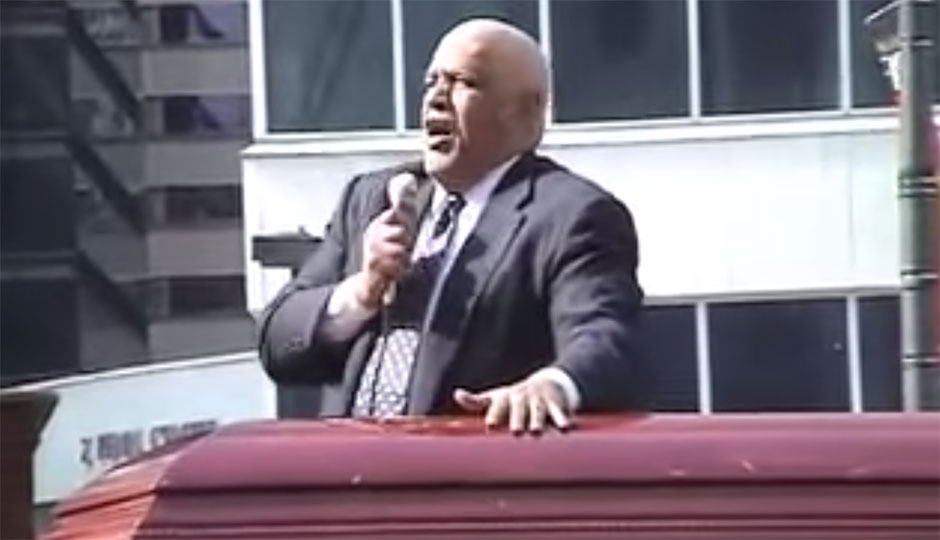 Milton Street draped over a casket singing a hymn. This actually happened.

Ten years ago today, the 2007 Philadelphia mayoral primary was in full swing. Who would replace Mayor John Street? The list of qualified candidates was seemingly endless: A self-made millionaire, two Congressmen, a City Councilman, and a state Senator had all jumped into the race.

Next to enter? Milton Street, John’s brother. He was being investigated by federal agents. He hadn’t held office since being elected to the state Senate in 1980. After that election win, he switched his party affiliation to Republican and took Vince Fumo’s old office. But he announced a rally at Dilworth Plaza that day, and said he’d drop out of the race if 5,000 people didn’t show up.

The rally did not go as planned. The crowd was mostly bored office workers, news media, and only a few diehard Miltonheads. Five thousand people did not show up. But Street soldiered on. He brought a casket on stage as a prop, explaining it represented two people who planned to attend his rally but were shot to death that morning. Asked about it later, police said no such double-murder had occurred in the city that day.

“I stand accused of doing some wrong things,” Street said at the rally. “But I don’t stand convicted. And in America, the presumption of innocence always prevails — until one is found guilty.” Street, indeed, would be convicted of tax evasion the following year.

But whatever. The highlight of the afternoon, and perhaps the highlight of the entire history of the City of Philadelphia, was when Street began singing the Mahalia Jackson gospel hymn “If I Can Help Somebody.” Draped over the coffin, he belted out lines like “If I can help somebody, from doing wrong / No, my living shall not be in vain.”

Philly Voice’s Brian Hickey, another reporter who was there that day, wrote a delightful oral history of Milton Street’s coffin-singing today.

“I don’t remember the names of the people who were on stage with me that day,” Milton Street told him. “They said it was a crazy, looney press conference and everything like that. But I had an important message that day. … Check out how many people have died [of gun violence] since then, and you’ll see I had a point.”

Indeed, he’s right: Milton Street had a point. And we do all remember that press conference. If anything, we need more press conferences where politicians sing gospel hymns while draped over a casket prop. Thanks for that, Milton.