It turns out that a heckler is not the worst person in an audience. 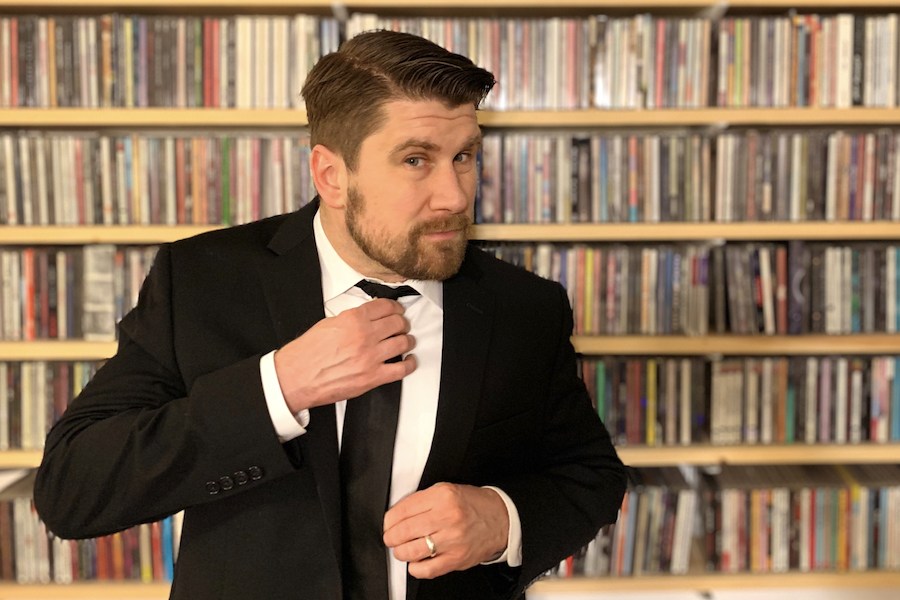 Best of Philly-winning Philly comedian Chip Chantry has a brand new comedy album out. (Yes, people are still releasing comedy albums, apparently, and you can download his here). We caught up with the 41-year-old Italian Market resident to find out why on earth he decided to become a comedian.

My real name is… Paul Chantry III. When I was a week old, an aunt of mine said I was a chip off the old block, and they decided it would be a great name for me, and I’ve never been able to shake it.

When I was a kid, I wanted to grow up to be… a comedian, actually. I used to watch MTV’s Half-Hour Comedy Hour when I was like eight years old, and I’d record episodes with the old VCR and watch them over and over again.

I love my job, because… you get instant feedback. If you do the job right, you get laughter and find out right away. And if you don’t do it right, well, you find that out right away, too.

Making a living as a comedian is… terrifying and rare. I love it, but you’re always looking for that next job.

People who say that the comedy world is not inclusive are… probably right most of the time, but I hope and it seems like things are moving in the right direction.

Finding the line in comedy between what you can and cannot joke about… can be tricky. But for me, it’s pretty easy. The line I try not to cross is punching up versus punching down. I can make fun of people in power, but if there is somebody less fortunate than me or suffering in a way that I am not, I am not going to punch down on them.

A standard opening slot at a Philly comedy club for me pays… anywhere from nothing to a couple hundred dollars.

My favorite local comedian is… Mary Radzinski. Her writing is so sharp. Her word economy is perfect. She can be so dark, and with just a little wink, every joke is a perfect execution.

My first real comedy gig was at… Fergie’s Pub, upstairs. I opened for my brother’s band. They booked me without telling me. I was always saying that I would do comedy someday. And they told me a week or two before the gig. I couldn’t back out. I literally saw my name on a poster in town.

I have opened for people like… Dave Chappelle, Dana Gould, and Bob Saget. I’ve opened for Saget a bunch of times. There’s such a shock value from when we picture him on Full House and America’s Funniest Home Videos and then we see what he does on stage. I actually had to buy him underwear one night in Bethlehem. It had been a long stretch on the road and he was running out of clean underwear. He was going on stage soon, and he didn’t want to walk through the casino to buy underwear, because everybody knows him. So I did it for him.

On my days off, you will usually find me… walking around Philly with my dog, Stanley. He’s like a baby Ewok, and he even has his own Instagram account called @Concerned_Stanley, because he always looks concerned. 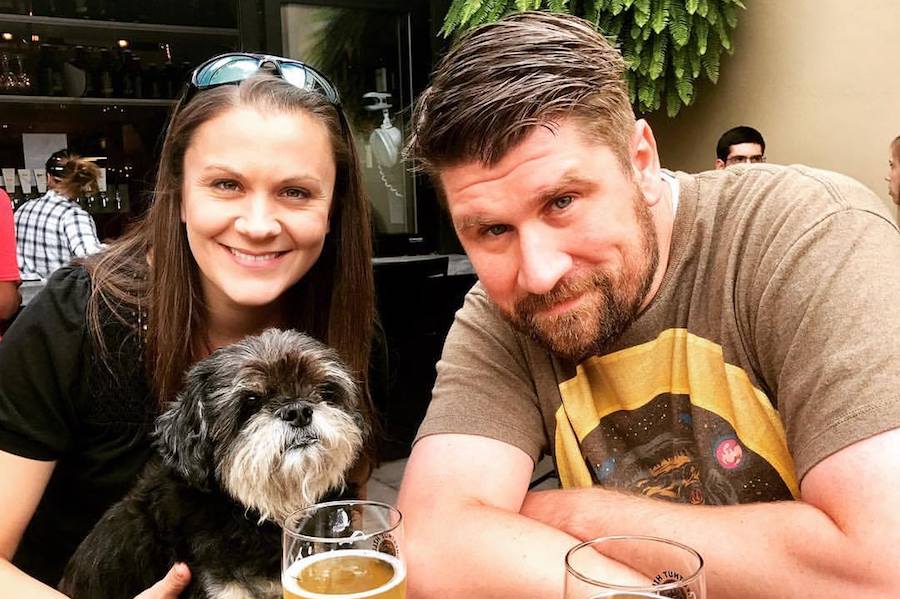 Chip, his wife Kim, and concerned Stanley strike a pose.

South Philly is… awesome. I love it. I live literally a stone’s throw from Villa di Roma, which is my little hangout. I was in L.A. recently for a couple of months writing for a TV show, and I was out there for about a month when Rocky came on the TV. I literally got misty-eyed when I saw Philly. The stoops.

My worst subject in high school was… chemistry. You never have to worry about me making meth.

When my parents heard I wanted to be a comedian… they were cautiously supportive. The biggest change came a couple of years ago when I was opening for Bob Saget at the Borgata. The Beach Boys were playing the night before. Well, Bob knew I like the Beach Boys and that my parents really like the Beach Boys, so he got us backstage passes. I think that was the moment when they were really OK with me doing comedy: Your stupid jokes led to us meeting the Beach Boys.

The worst set I ever had was probably… every single Monday at Finn McCool’s. Johnny Goodtimes and I used to host an open mic each Monday. The owner was way, way too kind and let us do this for three years, and it was just terrible. The guys were drunk and wanted to watch Monday Night Football, and here we were trying to be funny. We got beat down for three years, but it taught me to have thick skin.

One comedian I am not a fan of is… Gallagher. Why would you do an hour of comedy and then smash a watermelon everywhere, all over the audience? It’s like me doing an awesome set and then throwing buckets of chocolate syrup all over the room. Why would I do that? And who has to clean it up?

If you’re looking for a great open mic in Philly, check out… Helium on Tuesdays. They have an actual crowd and a nice mix of comics.

If somebody tells me they want to be a comedian, I will tell them… run for the hills. But if I couldn’t talk them out of it, I would say, just do it.

Hecklers are… usually sad, drunk and in need of attention they don’t get in their daily lives. But they are not nearly as bad as people who talk during the show. People who come to a comedy show and then just decide, Oh, let’s have a conversation. I don’t mind hecklers nearly as much as people who just sit there and talk to each other. At least a heckler is engaged with what is going on.

During COVID, We Moved Out of Our Fishtown Rowhouse Into a Rural Farmhouse