Power Home Remodeling Builds an Addition to Its Home

Like the rest of the company's headquarters, the new addition is aimed at reminding everyone, especially the people working there, that this isn't your typical remodeler. 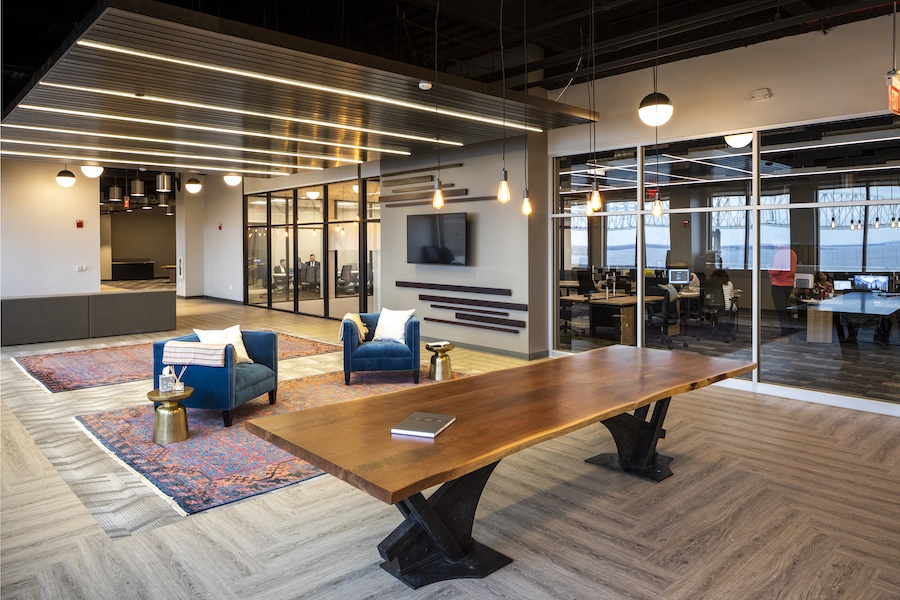 In the eight years since it moved its corporate headquarters to the Chester waterfront, Power Home Remodeling Group has set out to change the way people think about home improvement.

Not only its customers but also its workers.

The nation’s largest full-service exterior remodeling firm, Power has remodeled itself into a hip, cool, Millennial-friendly place to work under the leadership of co-CEO Asher Raphael. And the workplace itself is a physical expression of the firm’s unconventional approach to home improvement.

“There’s a stigma about our industry,” Raphael says. “Our industry is fraught with a lack of scruples, and we’re trying to bring a different level of professionalism, sophistication and scale to an industry that’s never seen anything like it before.”

And they’re doing it from a location most of the people Power would love to have working for it would probably avoid. Unless they’re soccer fans: their headquarters is located in a former Philadelphia Electric Company generating station just down the field from Talen Energy Stadium, where the Philadelphia Union play. The Union owns the building and houses its offices there; Power is its largest tenant. 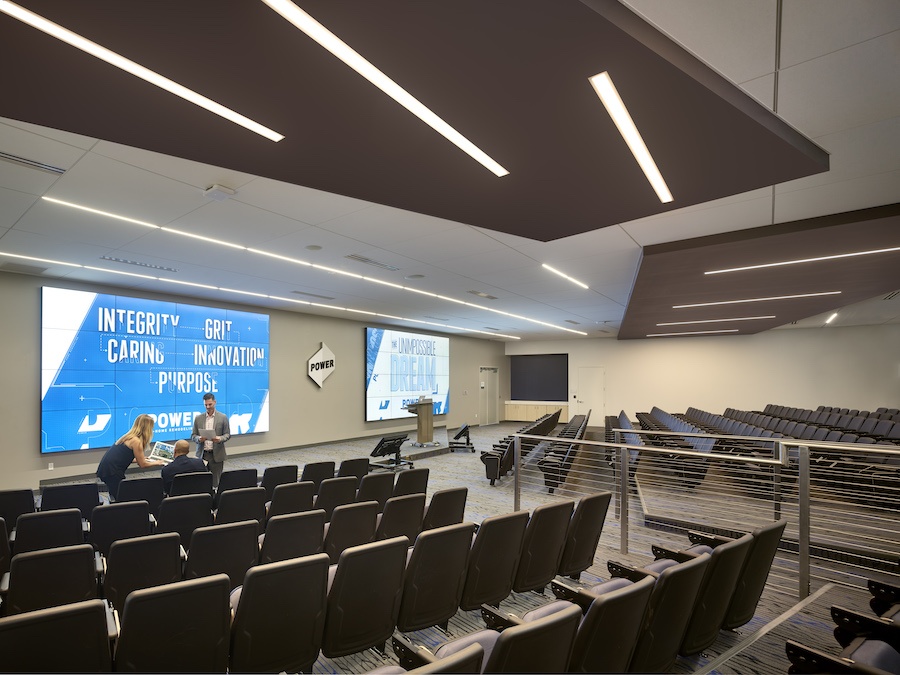 The main auditorium on the third floor of the headquarters.

“When people hear about a company that is in Chester, they don’t envision a place that is going to offer the quality of daily life that we offer here, as well as the cutting-edge business that we are,” says Raphael. 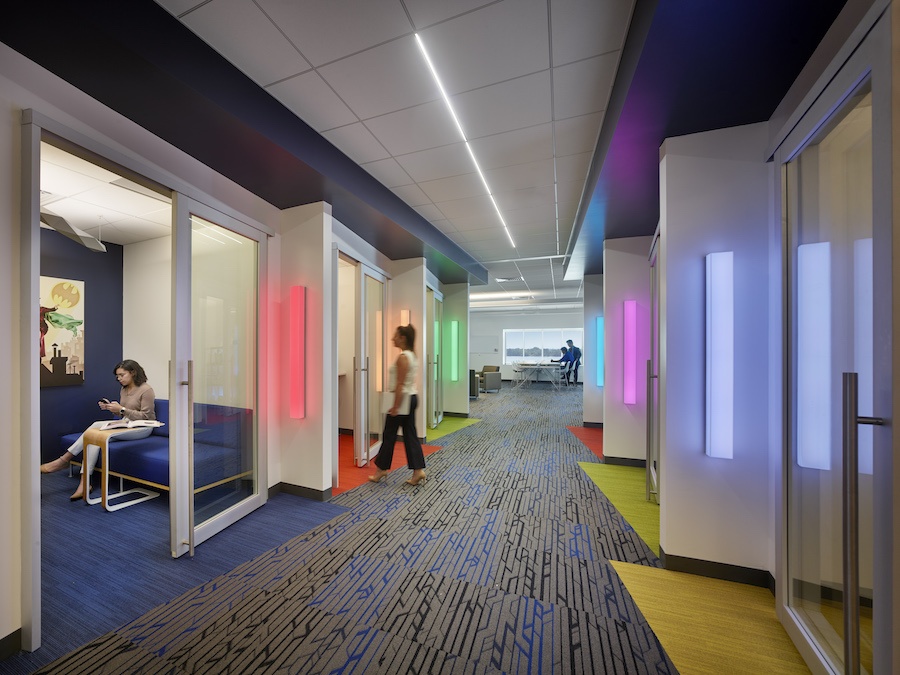 The company’s original space was designed to present that cutting-edge face to the world. Sleek, minimalist and cool, it’s done up mainly in white or light neutral colors, with lighting and display screens that add color and give the place a high-tech look. 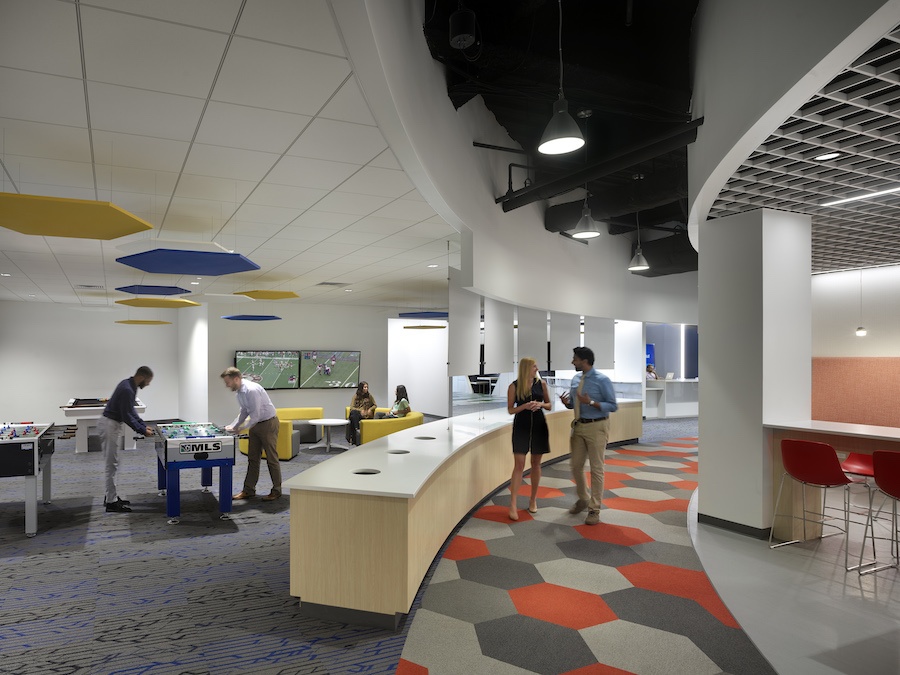 The game room on the third floor.

It’s also expanded significantly over the years. The company started out in a smaller space on the building’s first floor in 2011. They soon ran out of space and moved to occupy 100,000 square feet on its third and fourth floors.  Last month, the company put the finishing touches on an additional 50,000 square feet on the building’s fifth floor. We toured the offices in December, as the crews were still installing furniture and equipment.

If the lower two floors of Power’s offices show off the firm’s high-tech side, the new third floor is designed to bring the creative side to the forefront.

“It has a totally different feel, which is intentional,” Raphael says. “We’re trying to use it to recruit some people who typically would work in agencies that have a specific feel that we want to mirror.”

As we walked down the fifth-floor corridors to the strains of Vivaldi’s “The Four Seasons,” Raphael explained how the appearance of the various spaces on the floor was designed to complement their functions. 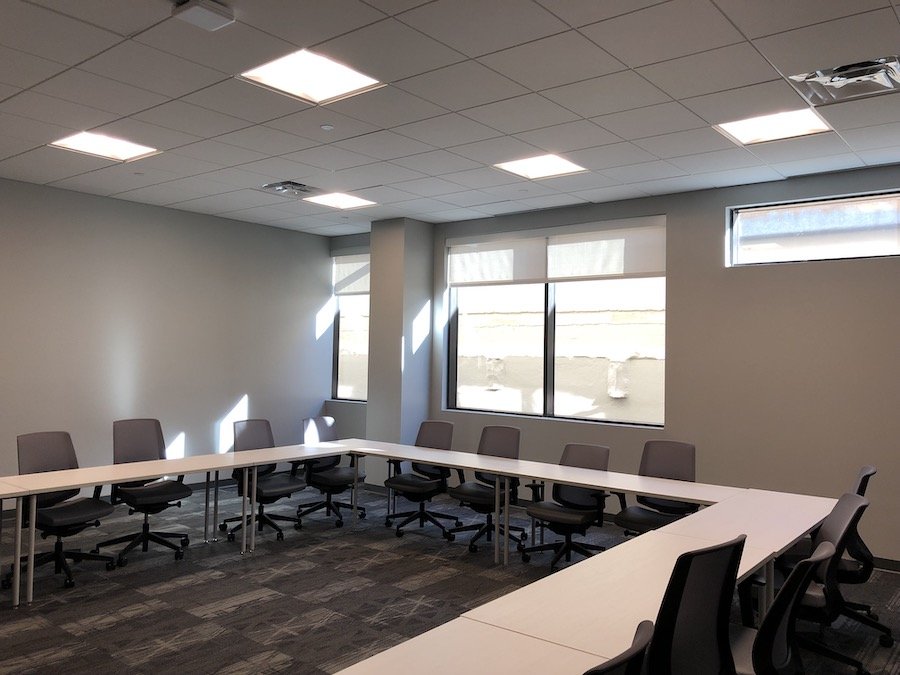 Training for sales, marketing and installation staff takes place in a series of small conference rooms on one side of the floor. These, Raphael explained, resemble facilities in the company’s satellite offices. They’re rather vanilla, but the company plans to enliven them by hiring graffiti artists to paint colorful murals on the parapet wall outside the windows. 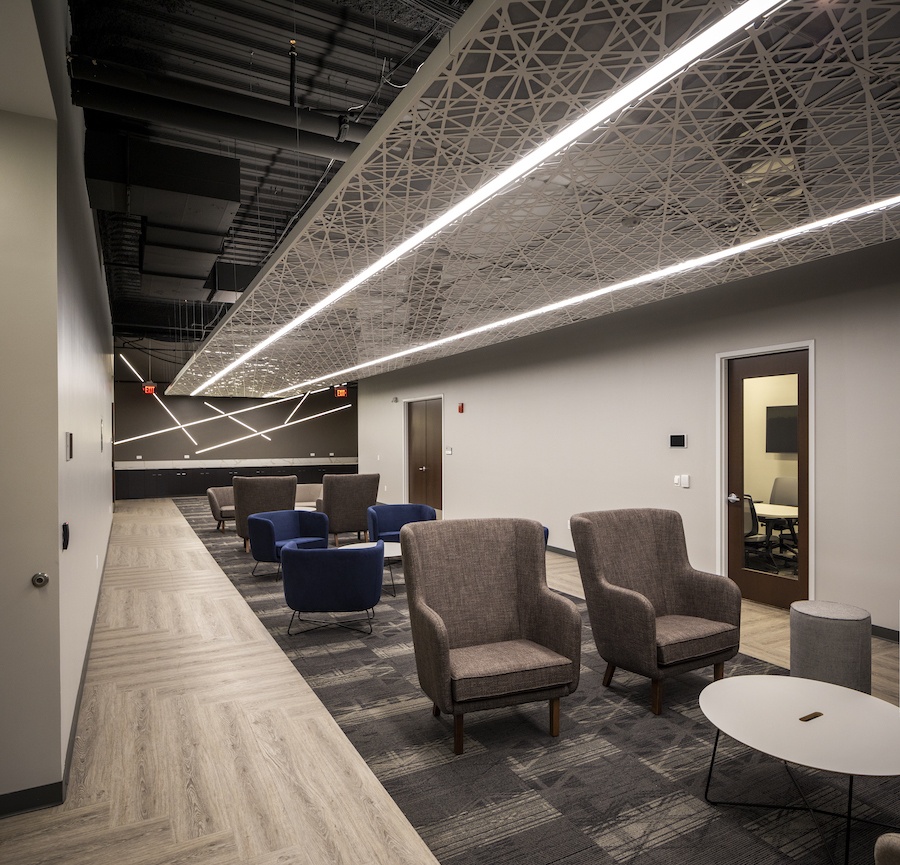 The rest of the fifth-floor spaces resemble what’s come to be known as “creative” office space. Warmer colors, softer grays and earth tones predominate, and the cool bluish-white associated with fluorescent lights gives way to spotlights and other lights with an incandescent glow in many of the spaces.

“All of the videos and content we produce is created in-house,” Raphael says. “We have our own creative team, which is a big impetus why we opened up the space to attract more creative people.” 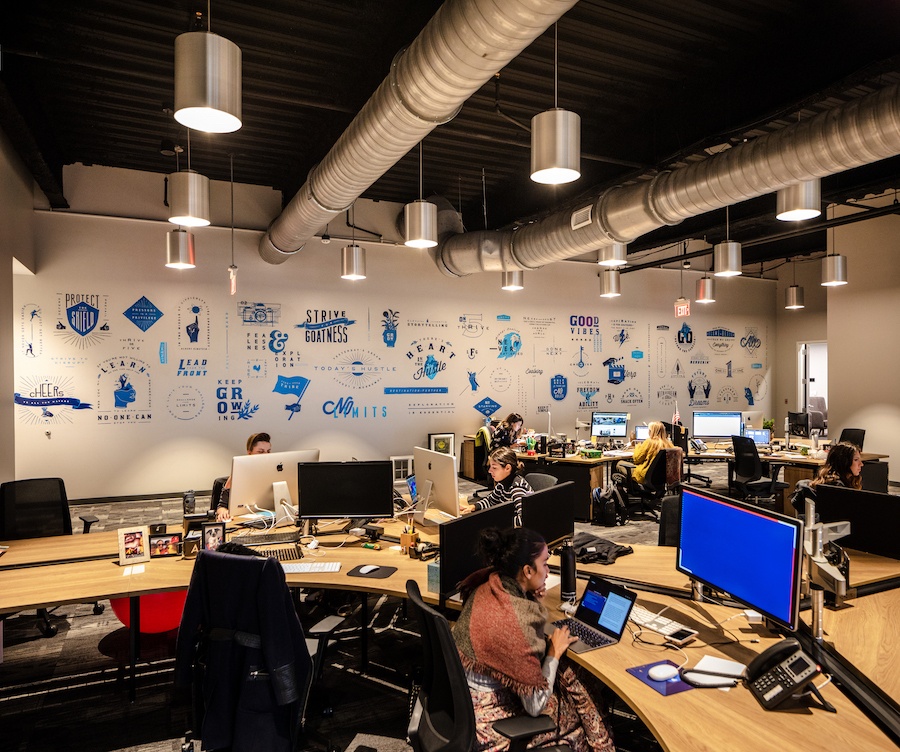 The marketing and communications department office.

Many of those people designed the graphics that grace the wall of the office where the marketing and communications staff works. Team members themselves wrote the inspirational quotes, Power graphic and interior designer Sierra Mergliano turned them into graphic art, and sign painter and designer Marissa Cianciulli, founder of South Philly sign shop Super Signs, painted the mural.

A panoramic view of the fifth-floor collaborative space, which offers a view of the Delaware riverfront.

And as on the two lower floors, the fifth floor offers community space as well as offices designed to take advantage of another unique feature of its building, namely, its location right on the Delaware riverfront.

“One of the reasons why the space looks the way that it does is because we want to make a destination for people to come to where they have these beautiful water views and thoughtful space that enables their work to be productive and efficient, but also really communal, and helps develop relationships among staff,” Raphael explains.

Thus there are two large communal spaces located on the office’s north side, where staff can take in the river view through expansive windows. 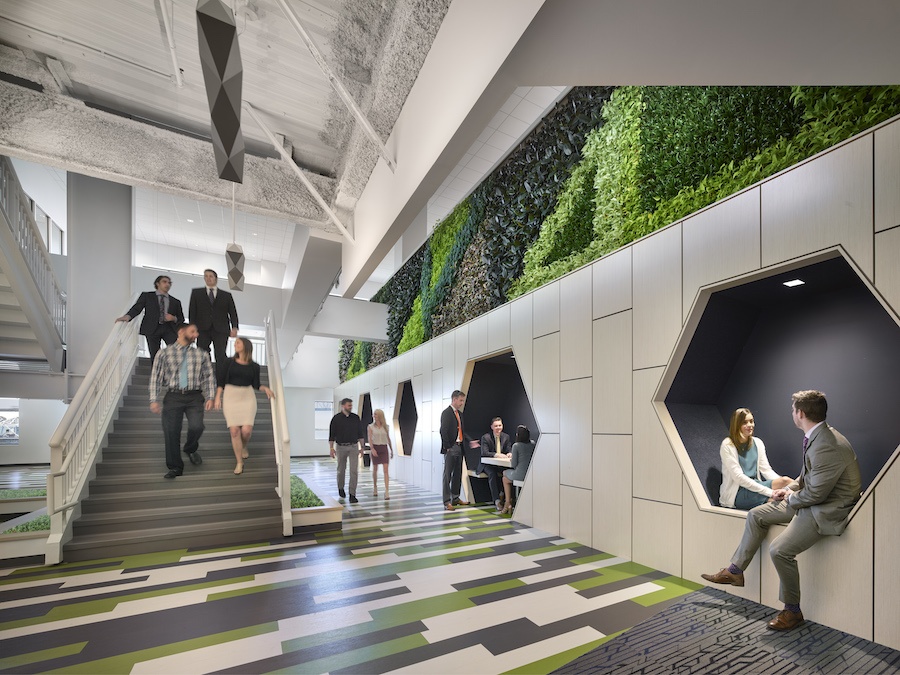 The “interior park” that spans the third and fourth floors.

The lower one is an “interior park” that rises through the third and fourth floors. This space brings a touch of green to the high-tech slickness of those floors in the form of a living wall. Cubbyholes in that wall offer space for staff to confer, socialize, relax or study.

The one on the fifth floor resembles play spaces and lounges in many a creative office.

The entire 150,000-square-foot headquarters space is also in many respects an in-house project: Power co-founder Adam Kaliner oversaw the design and development of the third and fourth floors while Raphael handled the fifth. Both worked with Wulff Architects on the design of the interior space and with BPGS Construction on executing the vision.

In addition, Vice President of Cultural Development Chelsea Sullivan had a hand in the design and development of the fifth floor.

“Our number one goal is to create an environment where people are happy and thrive,” Raphael says. And the numbers affirm that Power’s strategy is working: more than 60 percent of the workforce are Millennials and the median age of the office staff is 28. This past year, Fortune ranked Power sixth on its list of “100 Best Places to Work for Millennials,” just one of a slew of Best Places to Work honors the company has received both nationally and in the regions where it has offices.

And today, it received another honor that suggests Power has achieved its goal: Power ranked 77th on Fortune’s 2019 list of “100 Best Companies to Work For” nationwide. It was the only home improvement company to make the list, and only one other construction-industry firm appeared on it (home builder David Weekley Homes, in 47th place). Among companies in this region, its employee satisfaction score of 96 percent topped the other two Philly-area companies on this list, No. 28 SAP and No. 71 Comcast NBCUniversal.

This environment not only helps make the people who work there happy, but it also helps them change the public’s impression of home improvement. “We don’t want to follow best practices in our industry. We want to change our industry,” says Raphael.

Power’s rise to the top ranks of national home remodelers suggests that they’re succeeding at that goal too.

Updated Feb. 15th, 6:39 a.m., to correct the spelling of Kaliner’s name (we had it as “Kallner” originally) and properly credit the creators of the mural.