This South Street Tattoo Artist Is a True Philly Character

South Street tattoo shop owner Noah Webster on why Philly is better than New York, the "cesspool" that is Yelp, and what he wishes he could change about South Street. 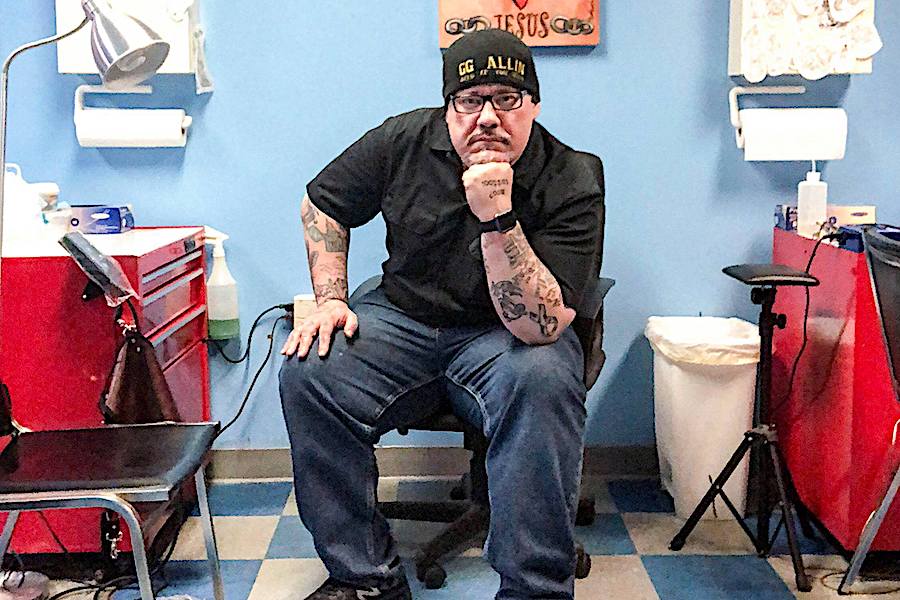 South Philadelphia resident Noah Webster has owned South Street tattoo shop Moo Tattoo for the last 22 years, and he’s a former board member of the South Street/Headhouse District. So he’s seen a lot of the changes that have occurred to the storied boulevard. And most recently, he’s been fighting to keep tattoo reality TV show Black Ink out of the neighborhood. We caught up with him to hear his story.

My full name is actually… Noah Stephen Webster, spelled like “Steven” but I usually pronounce it like “Stefan” when people ask. I’m distantly related to the lexicographer Noah Webster, and I was named after him. But I guess I was a disappointment to the Noah Webster name, because I went to art school.

I was raised in… a little town of 150 people called Cashtown, outside of Gettysburg. Then we moved to Chambersburg, where I really got into art, and then I wound up going to the Art Institute in Pittsburgh.

I came to Philly… 22 years ago to open my tattoo shop on South Street. Since I was in junior high, we would always skip school and come hang out on South Street, and I knew I wanted to be here.

I learned how to tattoo… around 1991. I was teaching a Head Start art program and then became a real estate investor in Lancaster, and one of my tenants was a tattoo shop. He knew I did art, and one day he asked if I wanted to learn how to tattoo.

I got my first tattoo… when I was working for that tattoo shop. He said, “If you’re gonna work for me, you gotta get a tattoo.” I planned this little one-by-two inch thing and instead wound up going entirely across my chest. It’s the Virgin Mary riding a cow, and it reads, “Hitman for Jesus, Painter of Cows.” I have at least 40 or 50 tattoos.

I don’t have tattoos on… my head or neck. Older tattoo artists, our tattoos aren’t generally on our face, neck or hands. The newer tattoo artists, their faces and neck and hands are covered. I used to be on the local zoning board — I was nominated by [former Philadelphia City Council member] Frank DiCicco, and he used to ask me, “Don’t you have a tattoo shop? Where are your tattoos?” And I would say, “They’re hidden under my suit and tie. I’m not coming out for City Council meetings looking like some punk.”

I spent the last week… in court winning a slip-and-fall lawsuit against me. It was ridiculous. A lady walked in drunk on Cinco de Mayo and hopped on one leg while adjusting her sandal, rolled over herself, and I was supposedly to blame.

The story behind my fight against reality show Black Ink coming to South Street… is that the show is not known for their quality of art. They are known for fights and parties and sex. It’s not the way the tattoo industry wants to be presented these days. They are trying to get a zoning variance, because as the existing zoning laws have it, you cannot open another tattoo shop on South Street. We are all grandfathered in. We have over 100 signatures from residents in a one block radius who don’t want this show to come to South Street. 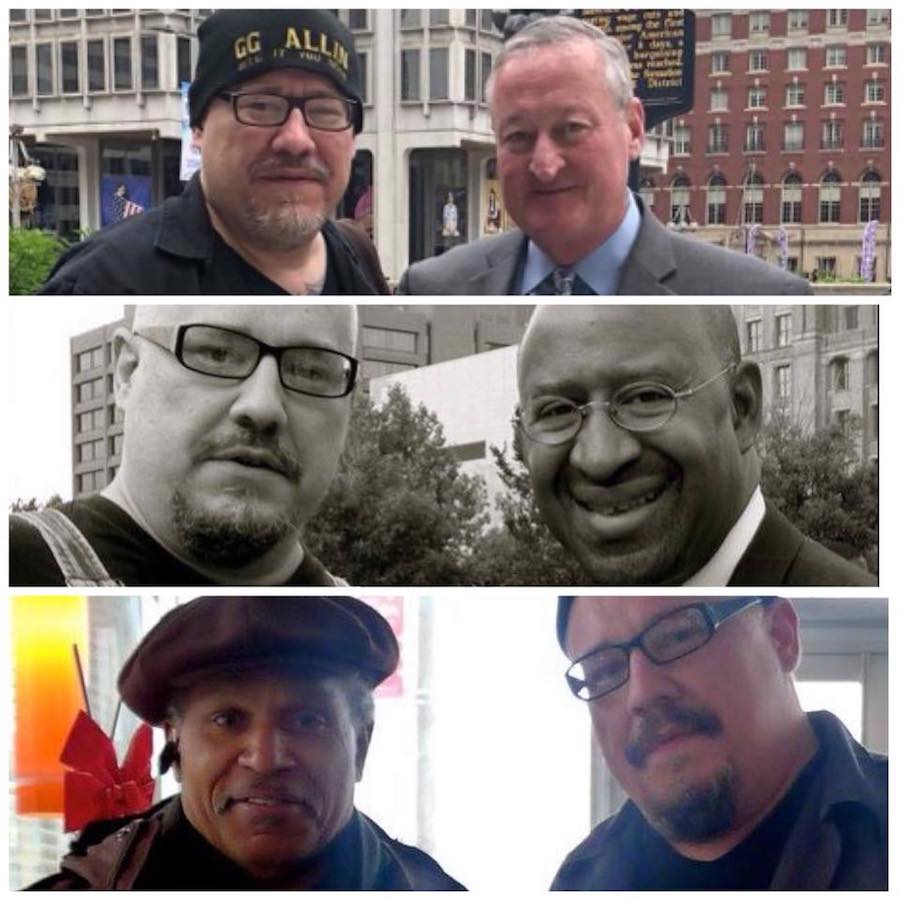 Mayor Kenney is… a good man who has the city’s best interests in mind, although we disagree about many things. I grew up in a family of politicians and have always learned to have a certain social respect towards people in office. My grandfather would often give me teachings on respect of society and civilization over oneself and those teachings always held dear. I’m not a Puritan by any means but do believe in common community goals through civic responsibility and public service. I think what people miss is that under any administration the best we can do is do our little part to help this city and country. Hell, I’d go work at the NEA under Trump tomorrow if it meant saving the arts in America. Doesn’t mean I would have dinner with the guy.

The thing most people get wrong about tattoos is… just because you see something on your phone doesn’t mean you can get a tattoo of it. No, you can’t get a portrait of your grandmother in a one-by-one inch area along with her birthdate and a bible passage. I think the record was that somebody wanted 37 different things in a two-by-two inch area. People want these tiny little things, especially women. I think we’re the only industry where the ladies constantly ask if they can have it smaller.

My favorite places to eat in Philly are… Alyan’s and Essene. Their vegan buffet is really good. It just sounds so smug to say that you’re vegan, so I like saying it. But when I go away with my fiancee, who is on a high fat, high protein diet, we’ll have meat, and I’ll occasionally get a burger in Philly, but nowadays you have these vegan burgers that you’d never know aren’t meat. They have them at Tattooed Mom, and it tastes like you’re eating a Whopper.

My last vacation was to… Cincinnati. I’ll go anywhere that Frontier takes me for $20.

Owning a business in Philly is… extremely taxing, literally and figuratively. It’s an uphill battle, but it’s a good battle, and I wouldn’t want to be anywhere else. In New York, we’d be a dime a dozen, artists like me. But here, we get to shine and, in the meantime, be surrounded by great people.

If you want me to tattoo Donald Trump’s face on your entire back, it would cost you… your soul. Actually, I would charge double — so ballpark $20,000 — and give half the money to Planned Parenthood.

The most common tattoos that people want these days are… some original tattoo they see on Pinterest, but I explain to them that those custom tattoos are original works of art. But people are so entitled. They should be able to get whatever they want… Watercolor tattoos are also extremely popular right now, and that’s what I specialize in. Tattoos with a watercolor look. 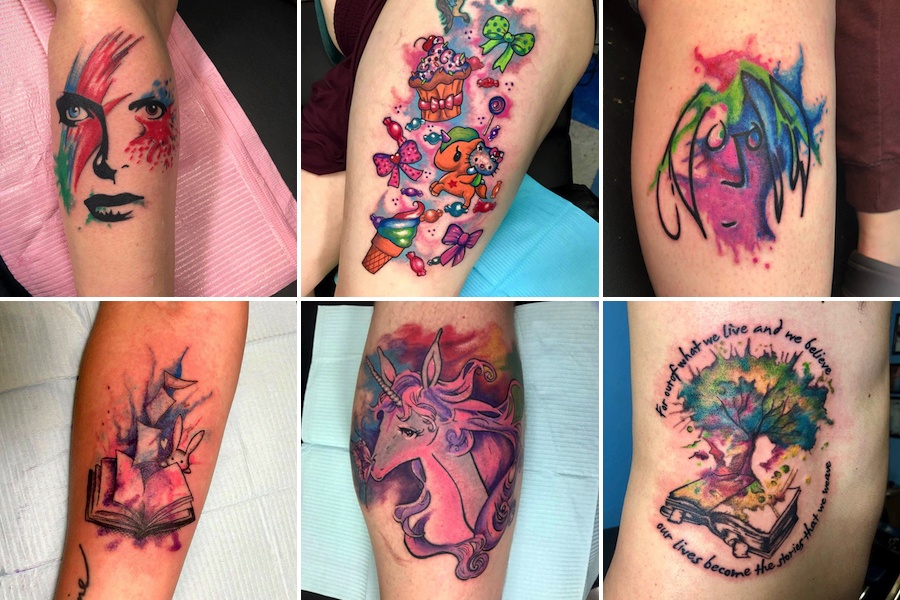 A sampling of some of the watercolor-style tattoos that are Noah Webster’s specialty.

Yelp reviews are… smug, arrogant cesspools of death that have no business in any society.

My average customer is… female. 20s to 40s. Our client base is not the stereotypical brawny biker. Demographically, our shops could fit in a mall next to Urban Outfitters.

The dumbest thing I ever tattooed on someone… was for this guy Billy. One day — this was in Lancaster — he comes in and asks me to put “Debbie” on his arm, and I say, “OK, Billy.” And then he says he wants, “She’s My Bitch” on top of it. And I say, “OK, Billy.” And then he wants a unicorn next to it. “OK, Billy.” He leaves, comes back the next week and wants “Brenda” with “Women Are Bitches” and a rainbow. OK, so through the years, I must have done 70 tattoos like that on him. It turns out that he would get his check cashed, ask the next lady he met for her name, and then he’d come to me, and if he was in a good mood, it would be “She’s My Bitch” and if he was in a bad mood, “Women Are Bitches.” And then whatever random symbol he saw on the wall of the shop. I always wonder what happened to Billy.

I will refuse to tattoo you if… you are drunk, didn’t bathe, or have an attitude. Most recently, a lady had an appointment and called to say she’d be late. Fine. She was a dog walker and said she was coming late from work. Well, she comes in, and she smells like alcohol and then I smelled something else… She wanted something on her foot, takes her shoes off, and I can see that her feet are literally caked in dog shit. I told her to go home and shower. She goes into the bathroom at the shop, sticks her foot in the toilet and flushes it. I shit you not.

One thing I’d like to change about South Street is… no more loud motorcycles. Man, I sound so old. But these loud vehicles. I could do without them. Well, and the loiterers. Oh, and more live music. I remember when Nirvana played Dobbs. We need some of that old energy.