His vibrant works counter racism head on, and he creates them pixel-by-pixel on Microsoft Paint. 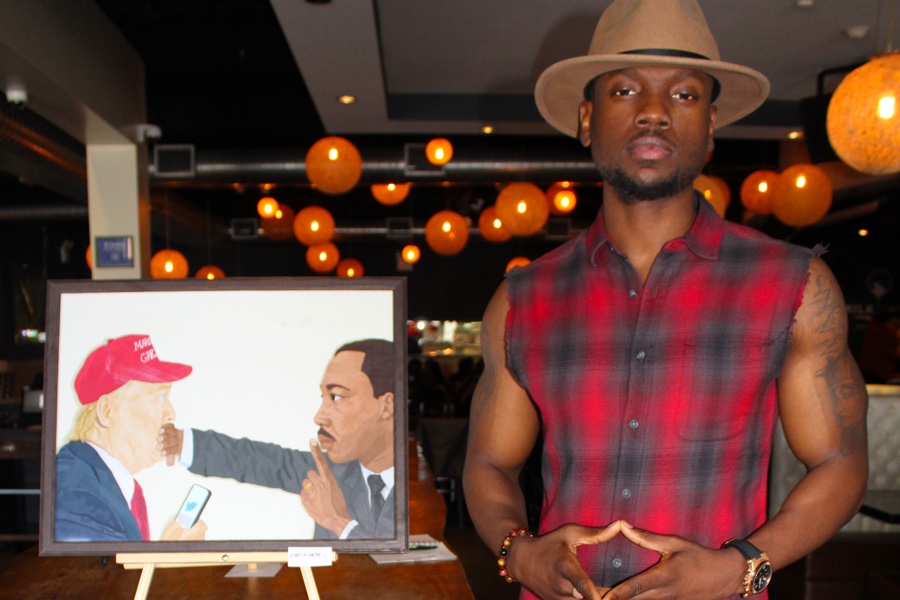 Within the last year, one particular piece of art keeps popping up at every protest and women’s march, and all across social media platforms including Facebook, Instagram and Twitter. The work depicts Martin Luther King Jr. holding up a hand to Donald Trump’s mouth, in an effort to silence him. (For those of you who’ve watched Black Panther, the piece is almost the equivalent of M’Baku’s silencing of the white CIA agent Everett Ross.) The viral work — “My Brother’s Keeper” — was created by Philadelphia artist Watson Mere, and he has a lot more pieces where that one came from. His online gallery and social media platforms are full of vibrant works that depict some serious ideas about the state of social justice and freedom in America. And what’s more, the 31-year-old Haitian American artist has created all of his pieces pixel-by-pixel on Microsoft Paint. I caught up with Mere to learn more about his creative process and how he, as a self-taught artist, has come to run his own business. Mere explains why his art is kind of like torture and passionately debunks some big misconceptions about the country where his parents were born.

I grew up in… a small town in South Florida called Belle Glade.

Something I miss about Florida is… the weather for obvious reasons. But also the different kinds of food. There were a lot of Caribbean restaurants in South Florida.

I’ve been drawing since… I was about two years old, before I could even talk. And I didn’t really speak until I was about four.

I got into digital art when… I was in the sixth grade and my dad purchased a computer. I messed around with Microsoft Paint and it’s been the main thins I use to create art since I was in middle school at age 13. 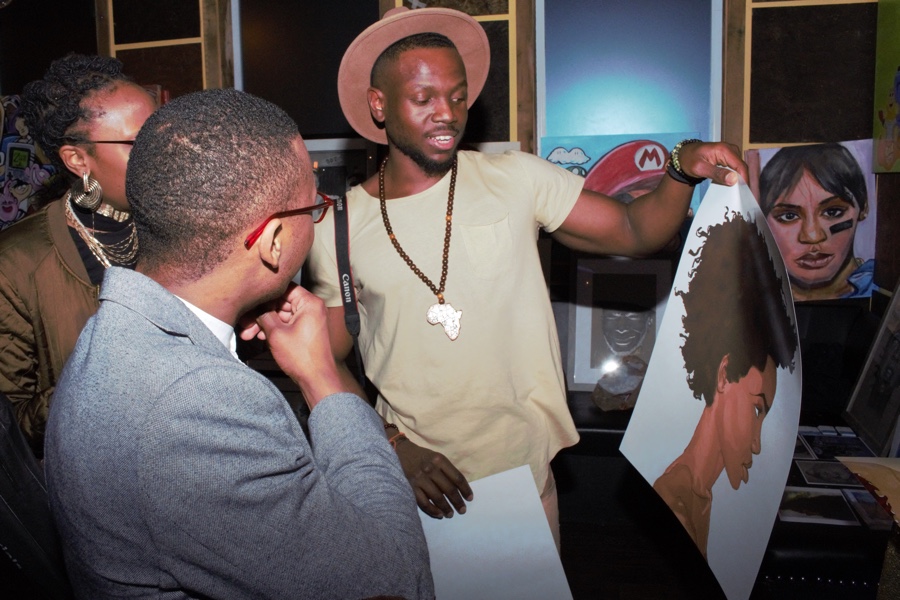 Many people are baffled that I use Microsoft Paint to create my pieces because… it’s very tedious. I also use a mouse and most people use a pad. It’s like second nature to me now. And I still don’t know what to call it exactly. Some have called it hand crafted visual art. And it’s tedious because sometimes a single thing can take two to three weeks. I don’t think many people are up for it. It’s basically torture.

Something my parents taught me is… how to be very spiritual and have faith even though you can’t see what lies ahead.

I wish I had more time to… create art. When you really start to put yourself out there, you realize you have less time to actually create the art. You’re trying to do so many other things. So I’d like more time to create.

I’m inspired by… life in general, from seeing designs on buildings to colors in nature and people’s conversations. Ideas just pop into my head from the simplest things.

I created “My Brother’s Keeper” because… I knew I wanted to create a piece involving MLK. This was around the time of the inauguration and there was something about the atmosphere that I just couldn’t shake. And both of the individuals depicted in the piece, Donald Trump and MLK, have some polarizing ideas. I thought it would be interesting to put the two of them together.

I think it went viral recently because… of the comments Trump made right around MLK’s birthday and he made the comments right around the anniversary of the earthquake that struck Haiti ten years ago. He has impeccably horrible timing. So I think it took off because of timing and that fact that I’m a Haitian-American artist.

A big misconception about Haiti is… that the country has no beauty. You don’t hear non-Haitians saying they’re going to Haiti for vacation or travel. People have a false image of the country and aren’t aware that it’s one of the most beautiful countries in the world and full of creative, vibrant people.

Something most people don’t know about Haiti is… its grand history. The country is dealing with a lot of struggles but people aren’t aware of all the dominoes that fell to put the country where it is now. It was the world’s first black republic and the Louisiana Purchase occurred as a result of the Haitian Revolution, just to name a few important event.

I’m really afraid of… not reaching my potential as an artist. It’s one of the reasons why I work so hard. I don’t want to look back and see that I didn’t put my all into it.

A goal of mine for 2018 is… to utilize different mediums to create my art. This year I started working with acrylic on canvas. I’ll move into experimenting with oil soon.

Putting a physical paint brush to a canvass is… definitely humbling. I’m so used to using a mouse. With a paintbrush my hand is still able to create the same kinds of forms and the base of it is very natural. I’ll definitely keep working at it.

The impact of social media on my art… has been major. Millions of people have been able to see my work, and I haven’t just had to rely on the people who visit galleries and shows.

I depict Donald Trump in some of my work because… rather than complaining about what he’s says, I try to create images to counter his narrative. I want to counter the negative energy he puts into the world. It’s kind of like a protest.

I want to inspire younger generations to… not be afraid to express themselves. When people are afraid of what others think, they hold their true selves in. But whatever is in you is in you for a reason.

A lot of my work features black women with natural hair because… I want to show that there are different levels to beauty. When I first started drawing black women, I Googled the word “beauty” and what popped up were images of people with Eurocentric features.

Before I create something I typically… meditate to clear my mind.

My daily routine involves… getting up in the morning and handling most of my business in the morning. In the afternoon I process orders and get them shipped out. Then I go off to sit down with my business partner to talk ideas and progress on things. I work out later in the afternoon. I do my art really late at night. I’m even embarrassed to say how late I work. It’ll be like 7p.m. to like 4 a.m. If I really want to complete something, I won’t go to sleep. I feel like there are less distractions during those late hours. And since I’m a spiritual person I really believe that during those times the ancestors and spirits can give you something more clearly.

"American Thought" by Watson_Mere. *READ* This piece has nothing to do with interracial relationships. This image is more so of a symbolization of 2 cultures that have lived on the same land for almost 400yrs but for the most part don't comprehend or understand each other. The 2 differing figures lay in the same bed with the bed itself being a representation of the United States and both reading and resting their minds on 2 separate ideologies. One being a white supremacist mind set bent on maintaining their perceived rule over the land through oppression and the other a Pro-Black frame of thought focused on becoming conscious of one's self, establishing a lost and dormant African culture and resisting the oppression coming from the contrasting culture.

My thinking behind the piece “American Thought” is… that America is a bed. And in this bed there are people with vastly different ideologies. And even though we’re all so physically close, we still might not all understand each other.

The new Obama portraits are… I just love them. They’re extremely important because they shine a light on different types of artists and reveal new genres of black art.

Artists I look up to include… Picasso. His life story inspires me. Obviously Basquiat because of the Haiti connection. It took me a while to understand his work. He grew up just like a lot of different black artists and he was basically able to make it from his att. That’s extremely inspiring. Kehinde Wiley. And Markus Prime has inspired me to put my stuff out there on the internet.

The last show I did was… a Pancakes & Booze show in January. I have a show coming up in DC on April 6. 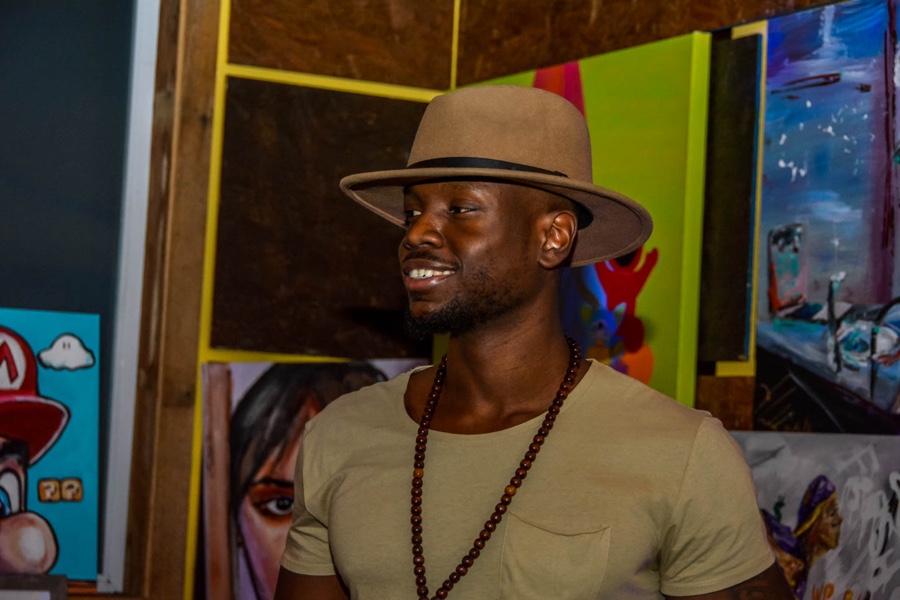 I don’t leave the house without… my headphones.

When I hit a creative roadblock, I… travel to see something new.

The best place to go to get inspired in Philly is… a GLBL VLLG jam session. My first time going was six months ago. At the event they hand the mic out and give people space to rap, sing and do poetry. I just like to soak in all the energy there. It’s very therapeutic and nothing else like it.

Philly artists would like more… light shone on them. There are a lot of great artists in this city. Some of the best I’ve seen and more people should know who they are.

In ten years I see myself… having a bigger influence on the culture. I see myself continuing to inspire people to be themselves and to express themselves.