“This Is Stupid”: What Philly Drivers and Riders Are Saying About Uber Pool Express

I gave it a fair shot. Here's what I observed. 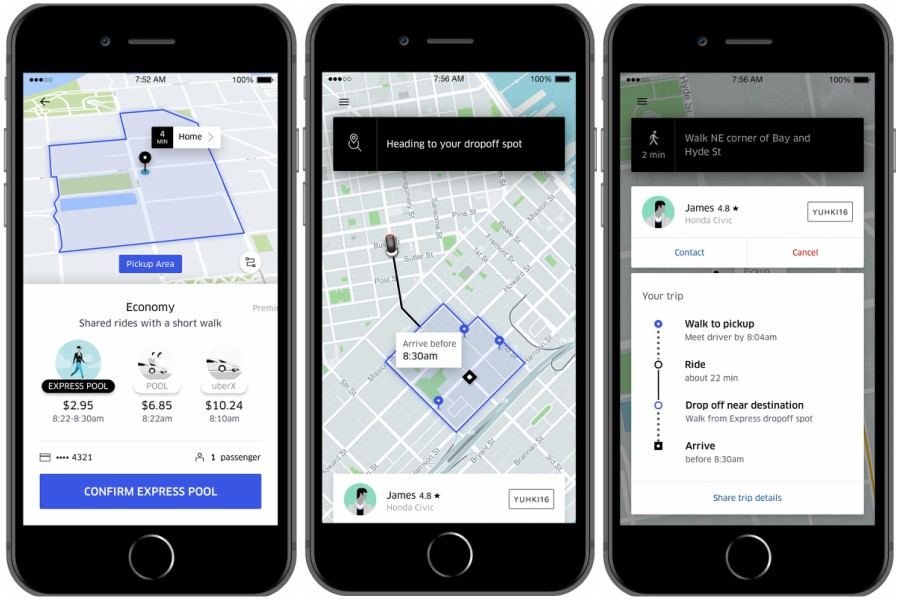 You’ve probably heard by now that Uber is once again trying to disrupt its own disruption. Last week, the company rolled out Uber Express Pool — a shiny new version of traditional Uber Pool, which the company launched in Philly just two years ago.

Uber says the new option is its most affordable: Express Pool is up to 50 percent cheaper than regular Pool and up to 75 percent cheaper than UberX. The catch is that riders must put their feet to work. Pool Express rides pick customers up at a designated location — a spot that’s a block or two away from an origin address — and drop them off within two blocks of their destination.

So how’s Uber Express Pool working out in Philly so far? Since the launch, I have taken a few rides myself. Here’s what I have observed:

It is Uber Pool in disguise

Each time I’ve hailed an Express ride, it has been cheaper than standard Pool (about $1 to $3 cheaper), but I have yet to see it be anywhere near 50 percent cheaper. In some of the rides, the pickup and drop off points just happened to be at my doorstep instead of up to two blocks away. No complaints there, but if Uber’s goal is efficiency, was the AI’s decision to drop me off at my doorstep the best way to help drivers save time and ultimately make more money? In terms of total travel time, I saw no marked difference between my Express and standard Pool rides.

Interestingly, regular Uber POOL riders are mixed in with Express commuters, a fact that Uber product director Ethan Stock confirmed to reporters on a press call last week. In a ride I took on Saturday morning, whenever someone hopped in the vehicle, our driver had to ask whether we had selected the Express or standard option. And whether we had selected Express or Pool, the driver dropped us off at our doors in an effort to please everyone.

Users are concerned about safety

A fellow Uber rider, 24-year-old April Francia, told me in a ride last Friday that on her first time trying Express, her driver dropped everyone off at their doors because he “felt bad.” “There were three women about my age in the car, and it was around 8 p.m.,” she told me. Plus, the driver was going to pass her destination anyway, she explained. Francia said she sees no reason to take Express again “since it’s not much cheaper than POOL. People hate change and if there’s not a super big difference, then why do it?”

The first time I took Uber Express, I got into the vehicle and my driver, 50-year-old Amare Cebede, told me he’d heard about Express on the radio. “It’s harder to do my job when they don’t communicate,” he told me. Drivers are only notified that a rider is an Express customer just before drop-off, when the app says the rider will walk to their destination.

With Express, there’s no immediate or direct benefit for drivers. They are still paid per mile and per minute on top of a base fare and a fee they receive for each pickup. Whether Express actually gives them time to make more pickups is still left to be seen.

Drivers are apparently dealing with more logistical headaches, too, hopefully a result that will die down with time.

Upon getting into my Saturday evening ride, the driver immediately told me he had just been cursed out by a passenger because he wouldn’t drop her off at her door. On the trip, we went to pick up a second passenger and as we waited for her on a street corner, she gave the driver a call that he answered on speakerphone. “This wants me to walk down a block, so I’m coming up the street now,” she said. Within seconds we were on the move, without the passenger. My driver intentionally decided to cancel that pickup. “This is stupid. If we waited any longer I’d be wasting your time and mine,” he said. “We only get to wait two minutes. She will know next time. I feel bad for her, but sorry. I’m out here to make money, too.”

This experience exposed another gray area of Express: When riders request an Express ride, they’ll wait slightly longer — up to two minutes — for Uber to place them on an optimal route. Though riders must wait longer to be matched with a driver, they still have just two minutes to make it to the pickup point that could be two blocks away.

There’s a fear that this is Uber’s strongest attempt at micro-transit, and Express has already been compared to city bus service. Yet, the new service operates more like an on-demand shuttle (think: carpooling service Via), and on average, likely won’t live up to be SEPTA-cheap. And even when it comes to efficiency, Uber Express isn’t packing in enough passengers per vehicle to boast the same kind of benefits to a city as public transit.

On the press call, product director Stock explained, however, that Uber’s next move will be higher-capacity vehicles like six-seat mini vans that can be offered at one-sixth the price of UberX rides. If that ever happens, SEPTA should definitely be concerned. Studies have already shown that ridesharing is eating away at public transit ridership, but we’ll have to see whether Express will really hasten the process.

In a response to Uber Express’ potential threat, a SEPTA representative told Philly Mag in a statement that they are “currently doing a thorough study of its entire bus network, in an effort to improve service and reliability for customers.”