Today Is the Internet’s “Day of Action” on Net Neutrality

Web giants like Facebook, Google and Amazon are urging users to protest the FCC’s impending rollback of the rules. Oddly, though, Comcast and AT&T stand behind the Day of Action, too. Here’s why. 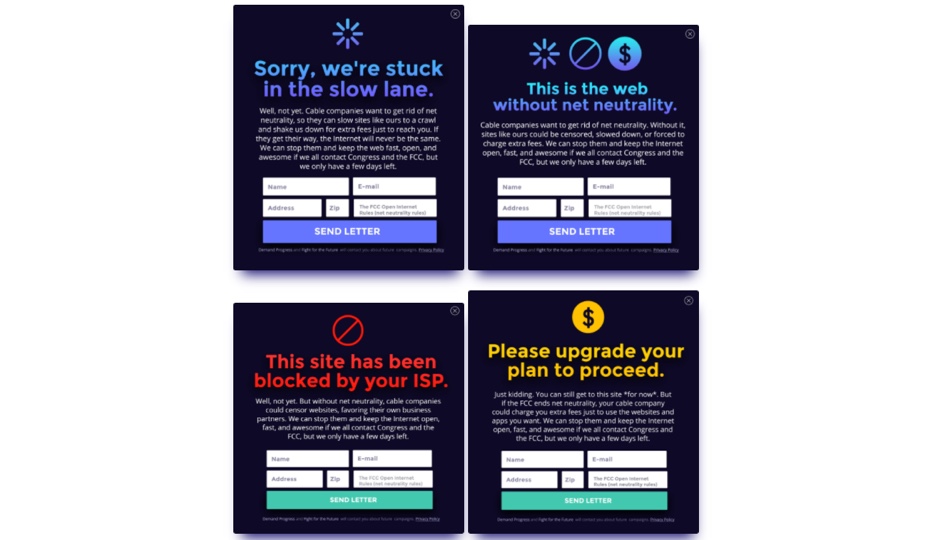 Photo: Fight For the Future

If you’re getting random net neutrality pop-up messages today on sites like Facebook, Amazon, and Google, that’s because these web giants are among thousands of businesses taking a stand to protect net neutrality.

Wednesday is the internet’s self-declared “Day of Action” on net neutrality, a vast effort (an estimated 70,000 sites are participating) to prevent the FCC from rolling back Obama-era net neutrality regulations. The rules currently prevent Internet Service Providers from blocking, throttling, or favoring select web content, keeping the internet free and open. For example, without the rules, ISP’s like Comcast could slow down certain websites or even completely block pages, advocates say, thereby creating fast and slow lanes on the internet.

Participating sites across the web are expected to place prominent alerts on their pages urging visitors to submit comments in favor of net neutrality to the FCC and Congress. Grassroots internet advocacy groups like Fight for the Future (FFTF) are encouraging sites to display banner ads across web pages and apps to send push notifications about the protest. Some sites are even displaying explainer videos and blog posts on why they support net neutrality. Each alert will have a link that connects visitors to sign various petitions or submit feedback to the FCC. Politicians like U.S. Senator Bob Casey have taken to Twitter to express their views on the Day of Action.

On this Internet Day of Action and every day, I’ll keep fighting for strong #NetNeutrality protections and a free and open internet.

“The FCC needs to listen to the voices of real people who will be affected by this attack on net neutrality,” said Evan Greer, campaign director for FFTF. “No one—regardless of their political affiliation—wants their cable company to control what they can see and do on the internet, or to charge extra fees to access the content they want.”

With the plan, organizations also hope to mirror an effective January 2012 Internet black-out, when sites like Wikipedia and Google blacked out sections of their pages in protest of SOPA and PIPA, intellectual property reform bills before Congress.

The FCC began rolling back net neutrality rules in May. The regulatory agency, run by chairman Ajit Pai, says the regulations stifle innovation and prevent broadband providers from competing with companies like Facebook and Google. Since the spring, ISP’s like Comcast have disseminated videos, blog posts and Twitter ads outlining their stance.

Both Comcast and AT&T have come out in support of the internet Day of Action. In a blog post published on Wednesday, Comcast senior executive vice president David L. Cohen said the company “won’t block, throttle, or discriminate against unlawful content.” He also took a moment to emphasize that the company opposes the “rigid, innovation killing” Title II regulation, but supports “permanent strong, legally enforceable net neutrality rules.” But experts have called bluff on this claim, saying that without Title II rules, there is no way to enforce net neutrality.

The last day to submit comments to the FCC is July 17.