Dusty king beds, TVs, and chandeliers were all up for grabs in Atlantic City on Thursday. 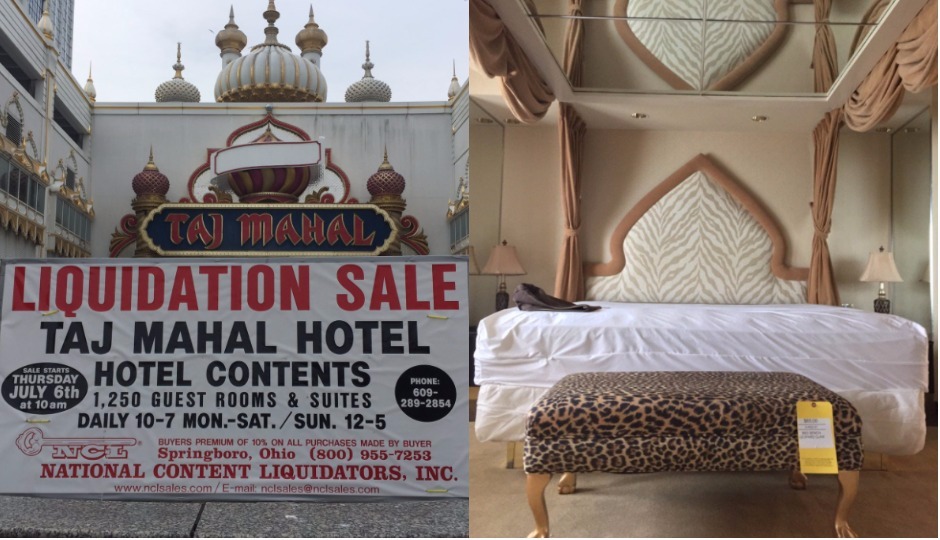 Beginning at 10 a.m. on Thursday, hopefuls looking to snag a piece of the once-acclaimed Trump Taj Mahal casino lined up for a liquidation sale that will wipe the casino hotel clean of its antique stock.

Everything from poker tables, grand pianos, chairs and bed linens had a price tag. When President Donald Trump opened the once $1.2 billion casino in 1990, complete with a Michael Jackson appearance, the crystal chandeliers were collectively valued at $15 million. Trump called the space “the eighth wonder of the world,” and it was the shore town’s most profitable casino for some time.

The sale will continue until every item is sold, the Press of Atlantic City reports, and will be open to visitors from 10 a.m. to 7 p.m. Monday through Saturday and noon to 5 p.m. on Sunday. Once the sale is over, Hard Rock International will commence a months-long overhaul of the defunct property, which is expected to reopen as a Hard Rock Hotel and Casino entertainment destination by Memorial Day weekend 2018.

Here’s a look at what’s up for grabs and the bargain hunters who showed up:

Here's a rundown of what's for sale at the Trump Taj Mahal pic.twitter.com/IH1dj8ronf

Press of Atlantic City reporter John DeRosier got a preview on Wednesday:

You can own one of the famous chandeliers over the escalators of the Trump Taj Mahal for $35,000 pic.twitter.com/y1UJpEshOv

All the TVs have been taken out of the rooms and are on sale. pic.twitter.com/KbehfriPHY

Al of the equipment in the gym is for sale. Good luck getting it out. pic.twitter.com/UJoXaAfexB

These planters inside the Taj are for sale. No price on them. pic.twitter.com/ReUiPbRDMn

The lights outside the casinos are for sale. And yes, the iconic white elephants at the entrance will also be sold pic.twitter.com/v1IsLYWFdB

Etched glass of the real Taj Mahal and some lions: $295 pic.twitter.com/hHcCJX3a7c

Press of Atlantic City reporter Nicholas Huba tweeted that there was a two-hour wait to enter the sale this morning.