From snap-off panties to trash-can decor, here's what and how Philly-area innovators showed off for the hit show on Wednesday. 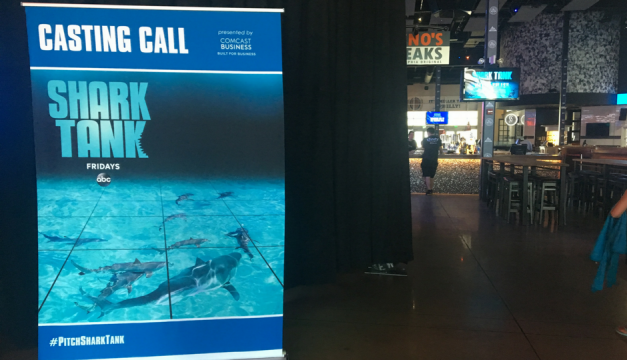 On Wednesday morning, hundreds of hopefuls toting products and presentations of all sorts lined up outside Xfinity Live! for Shark Tank’s annual Greater Philadelphia casting call.

As the hit ABC show revs up for its ninth season, the impact it’s had on America’s entrepreneurial spirit is more apparent than ever: Since its 2009 premier, producers now hear roughly 40,000 pitches annually. And last year, the show teamed up with Comcast Business for the first time to bring open calls to Philadelphia more regularly. Shark Tank holds fewer than ten casting calls each year nationwide.

Applicants from Pennsylvania, New Jersey, Maryland, Connecticut and a handful of other states showed up to fight for their chance to appear before the sharks. But, as we all know, the competition on Shark Tank is stiff—only 100 or so entrepreneurs of the 40,000 open call attendees make it on air each season. So do any Philly-area entrepreneurs at this week’s event have what it takes to wow producers and eventually score a big investment? From snap-off panties to trash can decor, here are seven ideas and products pitched at Philadelphia’s 2017 Shark Tank open call.

Ana and John Meyer were walking through their Morristown, NJ neighborhood in 2013 with their three young sons when they decided they were sick of seeing dirty, drab trash cans sitting around outside. “We decorate everything else outside our houses,” says Ana. “So why wouldn’t we also decorate this one huge thing?” Their solution was to start Garbage Pantz, stretchy tube-shaped fabric covers that fit over nearly any garbage can. Their designs are adorable, festive, and hilarious, from a classic blue jeans look to seasonal holiday Pantz. To top it off, the family truly went all out for the open call: Ana rocked the Pantz as a dress.

The caffeine revolutionaries from @JAVAZEN show off their pitch outside the @ABCSharkTank open call in Philadelphia pic.twitter.com/zf90yssRTn

JavaZen, one of DC’s hottest startups, was founded by three young former tech science minors in a University of Maryland dorm room. Their unique product, which combines the best aspects of both coffee and tea, has already been voted one of the Clean Eating Magazine’s “Top Ten Healthiest Beverages in Grocery Stores” in 2016.  JavaZen’s original forumula blends coffee, tea, and beneficial amino acids in a biodegradable teabag, which means the product is also pretty sustainable. The bottom line? Slow-acting caffeine means no jitters and no crash.

Justin LaKyle Brown has been running his Diversity Awareness Program workshops for ten years, but this charismatic self-starter showed up to pitch knowing that in 2017 his programs are needed now more than ever. Brown’s “in your face, ready to go” program, aimed at facilitating conversations about diversity at colleges and businesses, were inspired by the discomfort he felt as a black freshman at the predominantly white Slippery Rock University after his upbringing in Coatesville. D.A.P. utilizes clever activities designed to make participants uncomfortable, like Brown’s “stereotype cards,” which require workshop attendees to guess a racial, ethnic, or cultural stereotype that a participant has selected at random. “What really connects us at the end of the day,” says Brown, “is how similar we all are.”

I Ate This Random Product And It Wasn’t Bad – me every 10 minutes at the Shark Tank open call pic.twitter.com/DFbmmuAKYC

After years in the consumer packaged goods industry, Tim Galligan left his Long Island job to run TopBit, dedicating his time to manufacturing his 100 percent plant-based nutritional food topping. The powdered topping not only tastes good (it’s BizPhilly approved), but packs eight grams of protein per packet. Galligan was motivated to design a sustainable lifestyle after learning about the vast amounts of resources, including water, needed to produce animal products compared to plant products. TopBit has pledged that 20 percent of their profits will be donated to charity.

This is exactly what it sounds like. Boober’s novelty fishing lures are each shaped and painted to look like a pair of breasts in a bikini top. Despite their unconventional look, Boober Lure LLC‘s three founders, father and son pair Joe and Dan Bonner and family friend Larry Dugan, insist that their lures are surprisingly effective at attracting fish. The Philly locals crafted their first lure in 2012 after joking around during an unsuccessful fishing trip that all they’d need to attract anything, including fish, was “a pretty girl in a bikini swimming through the water.” (Dan Bonner stumbled a bit in this video, but said he’d have his pitched memorized better by the time he went before a judge.)

Tiffany Key and Nicole Savoy, the sheriff/competitive bodybuilder and police officer duo, drove up from Prince George’s County, Maryland, to pitch their clever product. Sick of the hassle of having to change multiple times per day due to their active lifestyles, their search for comfortable and functional underwear led these two women to design their own. DeNude makes underwear with button closures on each side, allowing wearers to take them off while their pants are still on. The result is a pair of functional (and still pretty sexy) panties that can come in handy in any number of situations – for instance, women who might feel uncomfortable being exposed in locker rooms can wear a pair while changing completely. But DeNude underwear are also ridiculously soft, so you’ll probably want to wear them all day long.

The idea behind Sayeed Dean’s Thinking Kapz is so simple that it’s genius. Each hat from Thinking Kapz “Fathom Your Thoughtz” hat collection is intended to be used as a wearable vision board. Rather than collect motivational images and phrases on a bulky poster board, people can add elements on pre-made or custom buttons. Dean, who now lives in Absecon, NJ, talks openly about how helpful the practice of maintaining a vision board was for him while in treatment for addiction in 2015. Today, Dean donates a portion of the Thinking Capz he commissions to recovering addicts in local rehabilitation centers.

The blow dry bar concept is still relatively new, with different chains popping up in cities nationwide, but Jennifer Powell of Hamilton, NJ is already already on top of the next wave of hairstyling services. She’s been the owner of Hairports Wash & Blow Dry Bar for a few years now, but only recently launched the mobile salon idea, which she first had while still in cosmetology school. With a little creativity, she’s figured out a way to rig a flight attendant cart into a rolling workspace that a “hair traffic controller” can bring right to your airport gate and use to style your hair while you wait for a flight. The styles on Hairport’s menu are cleverly named. Each style, like the Empire Straight, references a major world city. As of now, Jennifer’s only in-airport location is at Atlantic City International Airport, but she’s hoping to move into PHL and continue expanding.