A new report from the institution examines the pros and cons of the city's innovation economy. 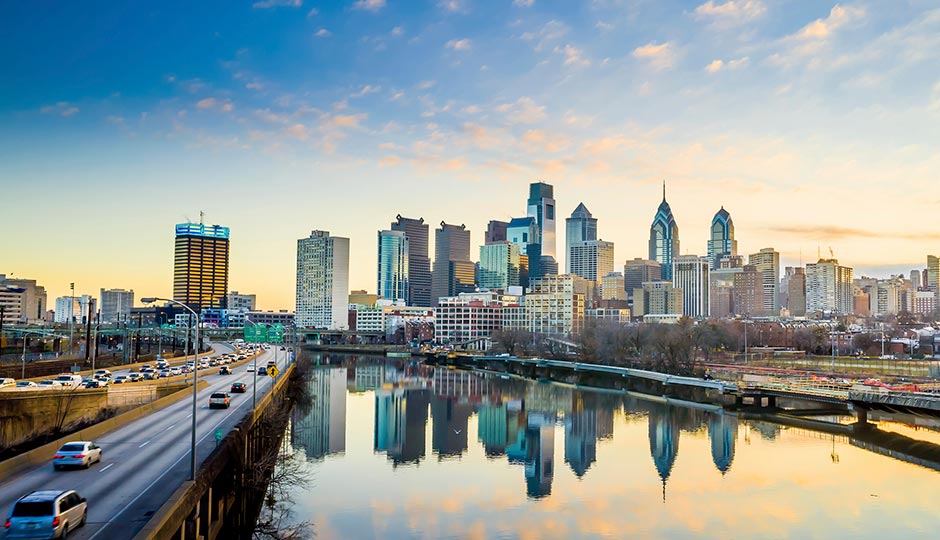 A new report released on Thursday by the nonprofit Brookings Institution tries to tackle a major, eternally looming question for Philadelphia: With all of the city’s recent advancements in innovation, why isn’t Philadelphia more competitive on the national and global stage?

The answer: Philly leaders and institutions lack “a sense of collective urgency” to help the city intentionally connect the dots on how to best leverage its innovation capacity.

The report examined what it calls Philadelphia’s “innovation district” the area from 17th Street in Center City to 44th Street along Market in University City and South along the Schuylkill River to Grays Ferry and determined that this region, home to anchor firms and institutions like CHOP, FMC, the Science Center, Drexel, Penn, Comcast, IBX, and PECO, can be further developed and more interconnected to push Philly past its innovation tipping point. 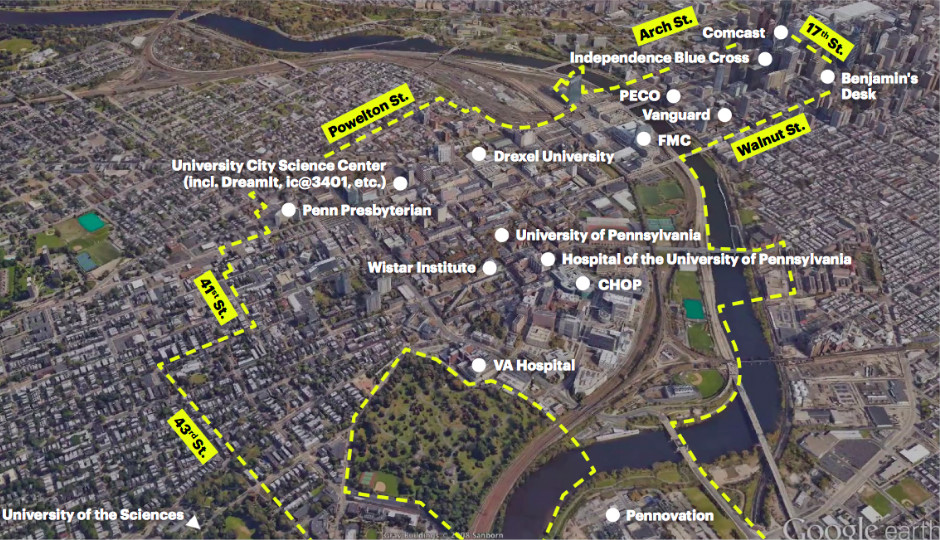 But before the authors prescribed their recommendations on how to bridge the innovation district’s gaps, they took a deep dive into what continues to ail the district and also what keeps it alive. Here are the strengths and challenges identified in the report: 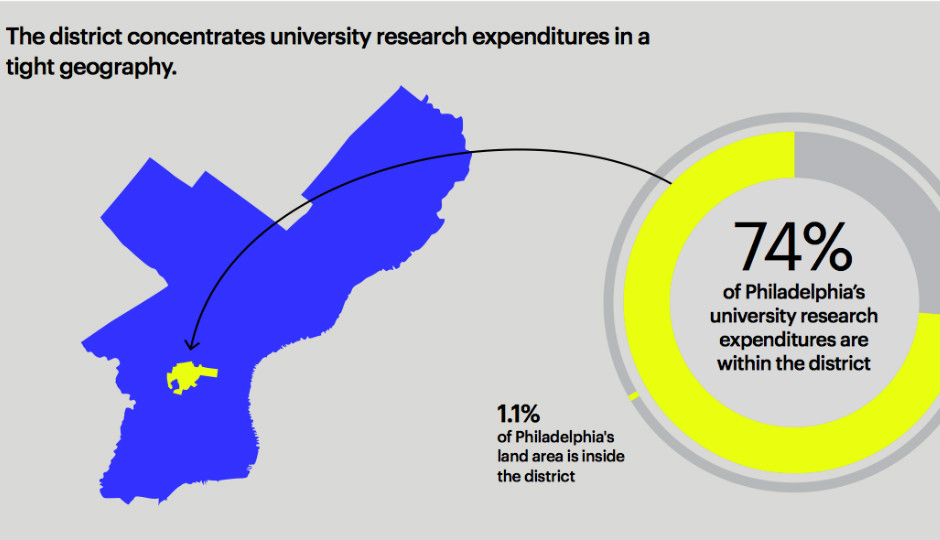 According to the report, the district brings in more than $1 billion in federal research dollars and accounts for 74 percent of total research funding in all of Philly. In health care and life sciences in particular, the district concentrates the more grant money from the acclaimed National Institutes of Health than any other area in the country. Philly’s innovation district also outperforms the national average when it comes to quantity and quality of academic publications.

Tech sector employment has grown by 77 percent sine 2000 in the innovation district, which is faster than the national average. The uptick is due to concerted efforts from organizations like Ben Franklin Tech Partners, the Science Center, and StartupPHL that work to fund and support entrepreneurs.

The innovation district has experienced the most jobs growth in all of Philadelphia, and interestingly, 55 percent of jobs in the area don’t require a four-year college degree. Wages in the district are also comparatively high, with 65 percent of jobs paying more than $35,000 a year, the city’s average per capita income. District workers and residents also enjoy a dense urban environment that’s walkable and packed with transit hubs and other amenities. 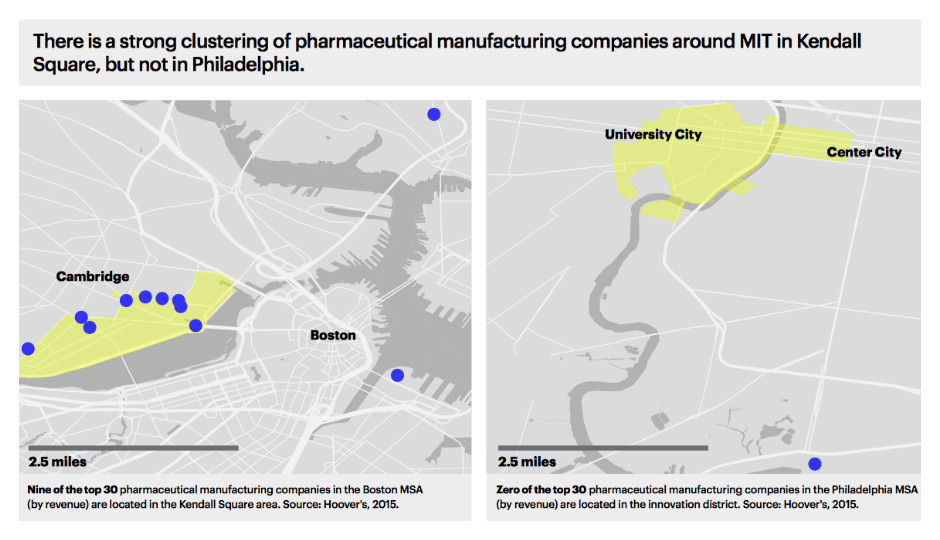 Philly remains behind cities like Boston and San Francisco when it comes to industry partnerships. In Boston, for example, its biotech startups and pharmaceutical manufacturing companies are clustered around MIT in Kendall Square. In Philly however, the largest pharmaceutical companies exist in the suburbs, far from the innovation district. The lack of alignment between research institutions and developers leaves Philly lagging behind in commercial output. 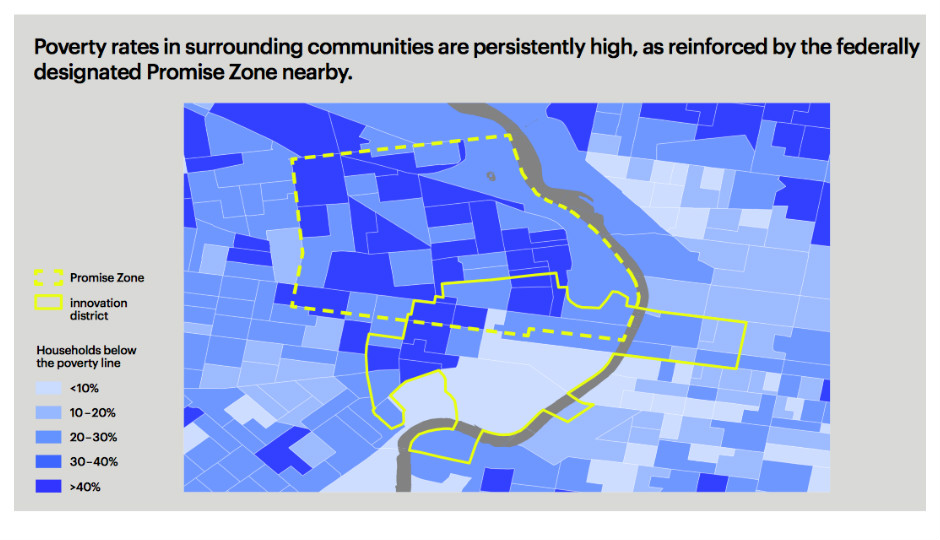 While the district has experienced high jobs growth, neighboring locales aren’t basking in the boom. Poverty rates in West Philly, in zip codes just outside of the innovation district, are persistently above 40 percent, with median household incomes below $20,000. The unemployment rate is around 15 percent, compared to the city’s overall rate of 7 percent. And there’s a stark racial element that furthers the division, too. About 70 percent of the district’s residents are white or foreign born and more than 70 percent of residents in the surrounding neighborhoods are black. Within the innovation district, workers of color are more likely to be in low-wage jobs compared to their white counterparts.

While the tech industry is growing, the Philly metro area is still behind the national average in new firm creation and many of the companies don’t support broad employment or growth. In terms of venture capital, Philly receives $82 per resident compared to Dallas, Washington, D.C. and Denver that get $101, $133, and $207 per resident, respectfully. 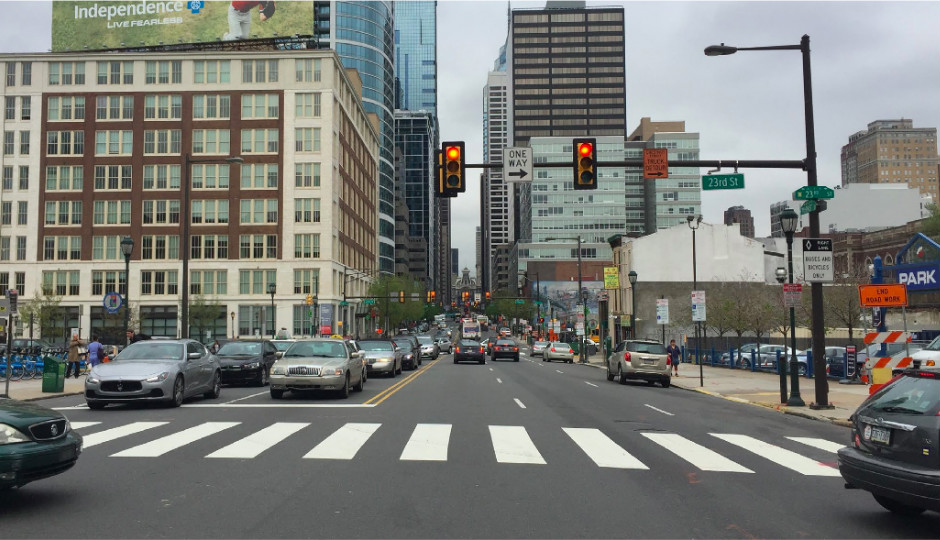 The report cites a number of underutilized parcels of land in the innovation district that make for a patchy stretch along Market Street. The physical challenges, which stem from area’s industrial past, make transit, bike, and car access in the area limited. “These issues not only heighten the lack of physical continuity between University City and Center City, but also represent, and contribute to, the current disconnect between the emerging innovation economies in both areas,” the authors wrote.