But it’s not a boycott — it was his choice. 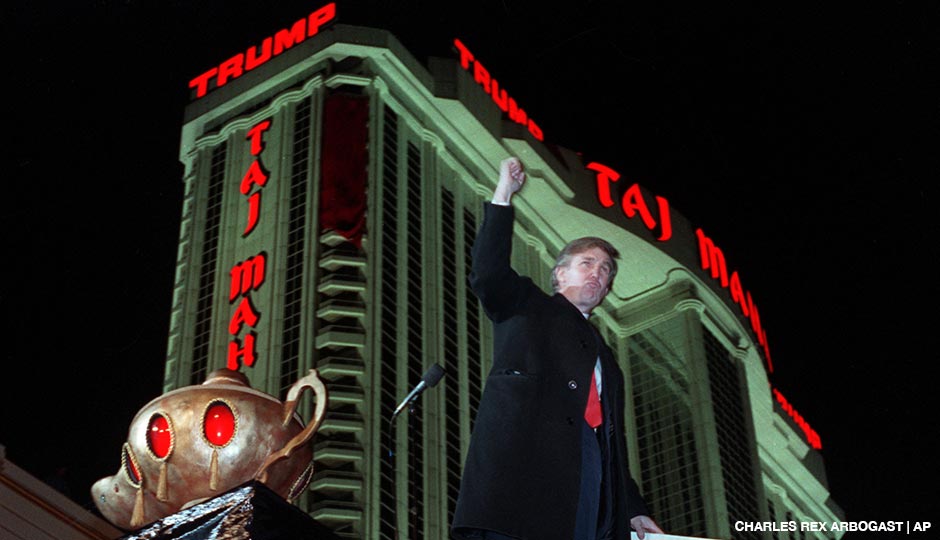 Donald Trump ascends the stairs with his fist raised after the opening of the Trump Taj Mahal Casino Resort in Atlantic City, N.J. on April 5, 1990.

President Donald Trump’s presence in Atlantic City legacy grows ever fainter with the removal of the Trump name from all sides of the Taj Mahal casino. But this isn’t a Trump boycott — in fact, it was Trump Entertainment’s choice.

On Wednesday morning, the Press of Atlantic City reported that the “Trump” has been removed from the boardwalk entrance to the casino resort, but his name is still featured at the front entrance of the casino and on the hotel tower. But, according to the Inquirer, those will be gone soon, too. Workers at the casino on Wednesday determined they’d get rid of 17 by next week, including the ones at the very top of the tower.

And there goes another one. Trump Taj Mahal in Atlantic City gets de-Trumped. pic.twitter.com/s8FAU282NT

The removal of Trump’s name is an effort to maintain the “iconic” and “invaluable” Trump Entertainment brand, according to a court filing. A settlement agreement between the casino’s owner, billionaire investor and presidential adviser Carl Icahn, and Donald Trump states that Icahn could keep the Trump name on the casino as long as they made renovations to maintain a “required Taj standard.” The president’s name must be removed by mid-March if the standard isn’t met, according to the agreement.

The Taj has been adorned with its former owner’s name since 1990, but the casino shut down last October after Icahn failed to reach a new contract with union workers. And it may be a while before the shuttered casino sees some much-needed upkeep: In a recent backlash against New Jersey legislators, Icahn announced that he would sell the new casino and make no further investments in it.