Baba’s Brew Founder Olga Sorzano Flew to Poland to Help Ukrainian Refugees. Here’s What It Was Like.

The Phoenixville-based kombucha brewer opens up about her volunteer experience on the Ukraine-Poland border last month. 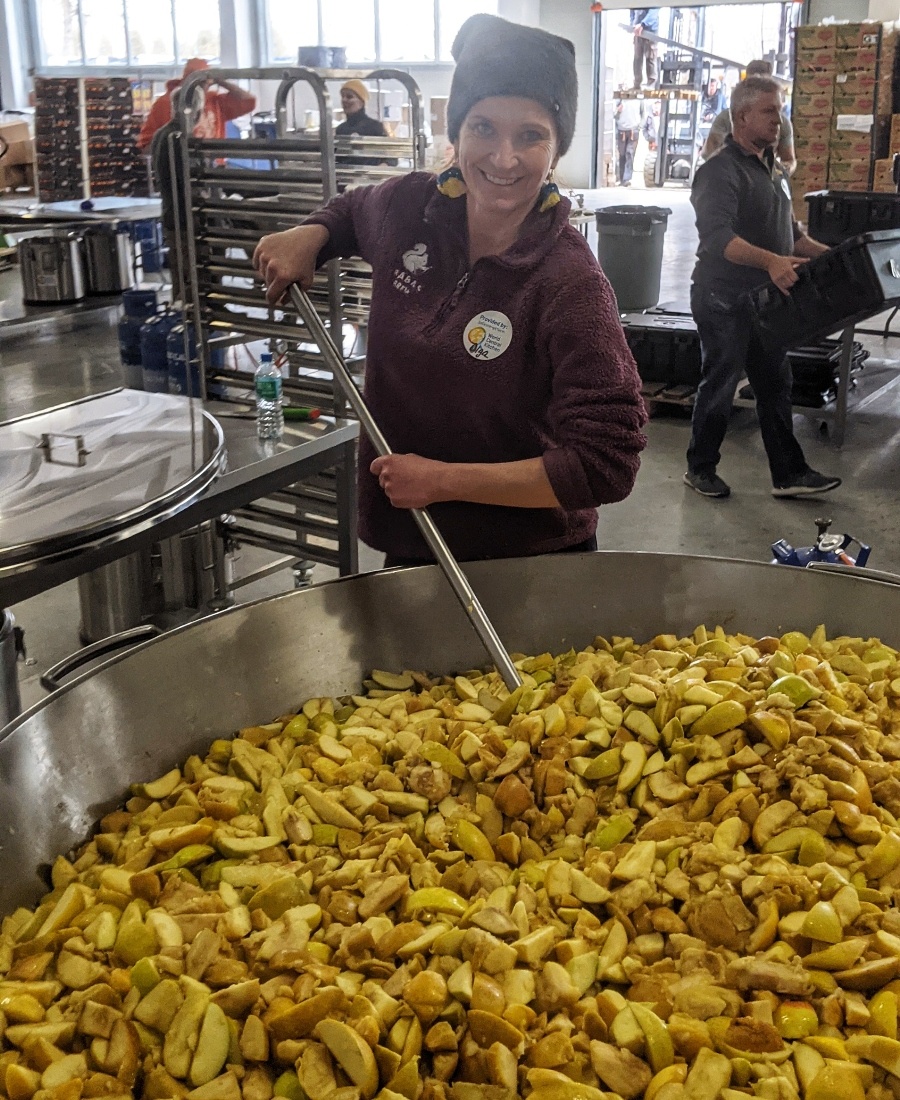 Ever since Russia invaded Ukraine at the end of February, people and organizations around the world have been looking for and creating ways to help refugees. Locally, Philly chefs and bakers hosted fundraisers to donate financial aid, museums and historic sites raised funds, state police agencies sent body armor to Ukraine, and hundreds of volunteers packed and shipped boxes of personal supplies overseas — just to name a few. (Want to help from home? Here are some resources.)

Below, Sorzano shares her eight-day experience on the Poland-Ukraine border cooking food, serving people in need, and witnessing the ongoing impact of war.

Why did you want to volunteer?
I was born in Russia, in southern Siberia. One of my grandmothers was Ukrainian and the other was German, but my family ended up in southern Siberia because during World War II, the Russian government pretty much ordered all individuals of German descent to leave the country because they were afraid that those with German heritage would end up following Hitler. So, I’m pretty well aware of how the Russian government can just dictate what they want done to the people they disagree with.

When Russia invaded Ukraine, I was emotionally demolished. I felt so horrified and depressed for people who had been displaced and whose houses had been bombed. Despite the fact that I haven’t been living in Russia for 22 years (I moved to the United States in 2000), I still felt such guilt — and also disgusted over the fact — that the leader of the country I call motherland was doing such a despicable thing. I knew I needed to help out in any way I could, but didn’t know how at first.

So what did you do?
Well, I have two close friends who live in West Chester, but are from Ukraine, and I asked them what they thought I could do to support refugees. That led to Baba’s Brew running a fundraiser at the very beginning of March. We raised $12,000 in two weeks, and 100 percent of the proceeds went to United Help Ukraine.

Then I found out through Facebook that Michael [Strauss] was in Poland helping with World Central Kitchen. It was the first time I realized it was possible to go over there. When I reached out to Michael saying I wanted to come, he told me that I’d need to register with World Central Kitchen, find lodging, and book my flight. He said another chef, Joncarl Lachman (owner of Winkel), was also interested in coming. Joncarl and I met the next day at noon, and by 6 p.m. we had both our flight and lodging booked. We flew to Poland five days later on Monday, March 14th and returned to the United States on Tuesday the 22nd.

That came to fruition so quickly. Before heading over there, were you nervous? What was your emotional headspace?
When I first went to register on World Central Kitchen’s website, it didn’t show any availability for work. I was afraid that we’d put all our money and energy into getting there, only to find there was no work for us. But Michael [Strauss] assured us help was needed, so we trusted that. Also, the day before we flew out, I saw on the news that a military base about 70 miles away from where we’d be staying was bombed. That proximity was a bit nerve-racking and a cause for slight concern. Those concerns disappeared when we arrived at World Central Kitchen (which is located close to the Poland-Ukraine border crossing near Przemyśl) — we didn’t feel nervous or unsafe once we were there.

What was your day-to-day routine/schedule while there?
We would get to the kitchen by 8 a.m., and the mornings would be spent peeling potatoes. Potatoes are one of the most popular vegetables in Eastern Europe — they’re part of pretty much every entree and they’re often in soups and stews. We’d peel and chop about 750 pounds of potatoes every day. After that, it was apple time. Apples were made into applesauce and pureed for babies. It was chilling in a way — knowing we’re making food for babies during the war. We’d portion about 1,500 jars of applesauce and send it to those still living in Ukraine.

Then, we’d have lunch, and after that, we’d be pulled in different directions depending on need. Tasks included cutting meat, prepping stews or sandwiches, and assisting with cooking rice or side dishes. One day, I helped out at a former Tesco supermarket, which had been set up as a humanitarian crisis center for refugees. They were hosting thousands of refugees. It was mind-blowing, seeing cot after cot after cot, and all these people not knowing what’s going to happen next for their lives. World Central Kitchen had set up a new sitting area and coffee/tea station there, and I spent about four hours serving warm drinks to displaced people.

Around 3 p.m., we would usually head out to the border, which was only a few minutes away. World Central Kitchen had set up several tents there to provide hot drinks and food to the people who had literally just arrived on buses from Kyiv. After spending all those evenings on the border, I met a lady from London who had a tent specifically for mothers and their babies. She had collected donated feminine and newborn products like tampons, pads, baby diapers, and had set up a nursing station and diaper-changing station. She needed to go back to London for a few days, and she asked me if I could help at the tent, which I did for two days. I figured my being able to speak Russian might help with communication since Russian and Ukrainian are pretty close languages. The women who passed the tent looked like they had just seen a miracle — just imagine traveling without being able to shower or change your underwear or change your baby’s diapers. Those items were flying off our tent’s shelves! They were free to take. 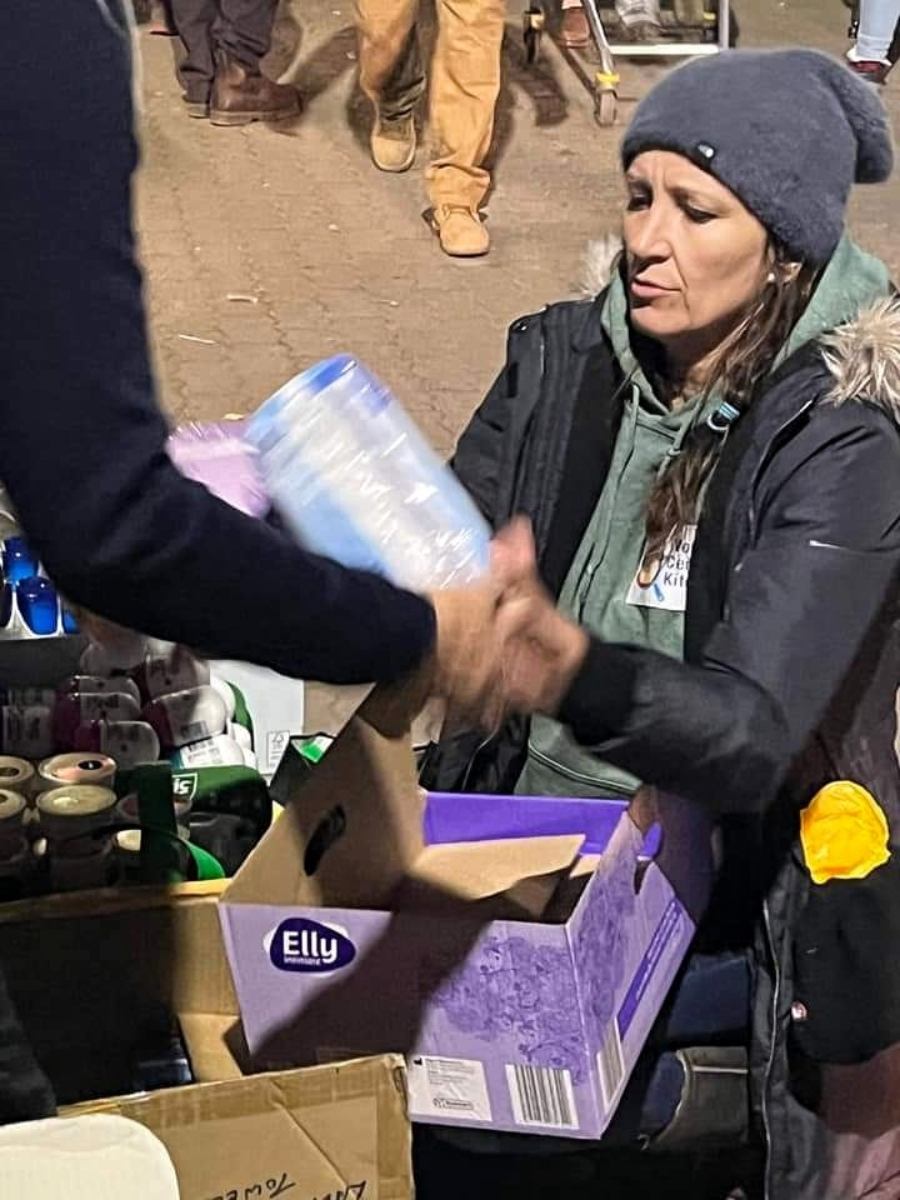 Sorzano at the tent dedicated to mothers and their babies. / Photograph courtesy of Olga Sorzano.

Watching the ongoing impact of war first-hand must have been surreal…
Yes, I saw and interacted with many people whose lives were upended. Many people only had one suitcase or a duffle bag with them — they had to leave their whole lives, all their memories, behind and only take the absolute essentials. Even though there was a sense of relief in escaping to a safe territory, many refugees told us that their husbands, brothers, and fathers were still in Ukraine fighting. They don’t know when their loved ones are going to join them. I also spoke to one woman who is a landlord and owns five apartments in Kyiv, and now she is homeless. And then there was another woman who was very fatigued, and ended up kind of collapsing near me. She was wearing a very heavy backpack, and told me she had been walking for five days. It was just heartbreaking. I knew it was going to be a really difficult trip, but the suffering, grief, and agony were palpable.

But seeing all the volunteers from everywhere around the world was very moving. There was a 72-year-old man from Texas working his butt off! Just seeing people volunteer and rise to the occasion was amazing. Also, Poland is an incredible country — Polish people opened their borders, doors, and hearts to all the refugees. I saw signs on multiple restaurants that said, “If you’re cold, hungry, or need to charge your phone, please come in,” written in Ukrainian. There were three buses running (at least in the area we were) that would take refugees to Luzerne, Amsterdam, and Milan for free. Coming back home helped put my life in perspective and my priorities in check. I’m lucky and privileged that I was able to go over there and help.

What do you think people can do to help from their own homes?
I pretty much posted every day on social media to show what I was doing and what had happened that day, and people would comment things like, “You’re a hero!” or “Sending prayers,” which is great, but those refugees need something more than prayers. This is happening to real people in the world we’re all currently living in. If we can, we need to participate in any way possible.

Every donation counts — no amount is too small. Sending money is so, so helpful. I also think the United States can do better to open the country’s borders during this humanitarian crisis, even if it’s temporary. Many people I know have expressed that they have a spare room and would be willing to host a family in need.

Finally, we cannot forget that this is still going on. With all the bad things happening in the world, it’s easy to jump from news story to news story and sort of move on from them. But it’s important to see images and hear stories so we don’t forget or stop caring about this war and the people it’s impacting. We can’t let that happen.